In fitting out its new U.S. headquarters in midtown Manhattan, Avon Products Inc. required that contractors -- from electricians to wall board hangers -- hire as many women workers as possible.

In the process, the 125-year old cosmetics company set a record for New York City, with a 17 percent female-crew ratio for the duration of the project. "We were proud this project was built by so many women, from the cabinet makers to the electricians," said Louise Matthews, Avon's Vice President, Global Real Estate at a press introduction to the building.

On site, women's construction hats were pink, the color Avon has transformed into a global symbol of its long-running effort to boost awareness of and research funding to beat breast cancer. 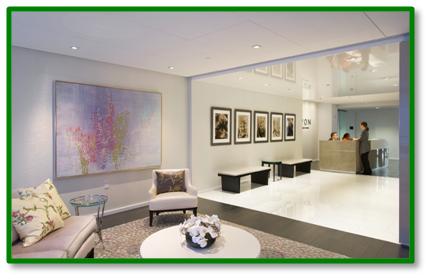 The results of those pink-hatted laborers were unveiled today at 777 3rd Avenue, Avon's new US headquarters.

At its 275,000 square-foot quarters, occupying the bulk of a 38-story, early '60s modernist tower, Avon retrofitted its new home to hit the Gold standard for commercial interiors under the U.S. Green Building Council's Leadership in Energy and Environmental Design (LEED) rating system. The designation will be granted once LEED has reviewed the project's scorecard.

Eighteen months in the making, the project's design and construction was led by HOK, a St. Louis-based architecture firm that specializes in sustainable design. HOK collaborated with Avon's internal design committee to help select a light color palate for a somewhat feminine, timeless feel to the interior, said Doug West, an HOK architect. The firm worked to keep the green features and technology systems behind the scenes, he added.

In making a move from its recently vacated former headquarters, just a few blocks to the west, Avon focused on saving energy and water, while improving the work environment for its staff: 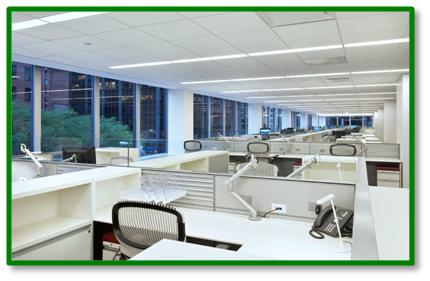 Lighting. To save power, the headquarters turned to high efficiency lighting, which cut energy use by 22 percent compared with a conventional system. Motion sensors in private offices and meeting rooms shut off lights. To maximize the use of natural daylight, work-station dividers are low, permitting light to penetrate deep into the floor plate. Some 96 percent of working positions have views to the outside.

Water. In bathrooms and pantry areas, high efficiency fixtures are the norm, saving about a third of water compared with regular designs.

Transport. Avon negotiated with the building owner to include bike racks and showers in the basement to spur bicycle commuters. The building is just a few blocks north of the Grand Central Station rail and subway nexus, as well.

The U.S. headquarters joins a growing portfolio of green buildings in Avon's network. Earlier this year, the company launched its "Avon Green Building Promise," a worldwide commitment to achieve at least a "certified green" level in every major new construction or significant renovation project, and to seek a higher level, such as Gold or Platinum (or local equivalent), where possible.

Towards this goal, Avon has also built or converted five other notable sites:

Avon's green building spree is likely to continue. "Our Green Building Promise ensures that we continually work to minimize the impact of our buildings worldwide," Matthews said. "We hope this will serve as an inspiration to other companies in New York City and around the globe."

Could a 'carbon coin' solve the climate crisis?