With more than 2,900 branches, 5 million customers and $300 billion in assets, PNC is one of the largest banks in the United States. Energy efficiency and sustainability are important parts of the company's corporate culture and are embodied in its bank branches, including the net-zero branch (PDF) it opened in Florida early last year.

Business owners typically view such investments in sustainability strictly through the prism of tangible, if not immediate, energy cost savings. Working with the U.S. Department Of Energy and other partners, for example, PNC estimated the new branch in Florida would use 49 percent less energy than a comparable prototype and save nearly $10,000 in energy costs per year with a short, six-year payback.

However, what eludes nearly every estimate are the real but seldom quantified benefits to workplaces that incorporate energy efficiency into their building designs and renovations. In other words, PNC's energy-efficient bank branches generate far more value than just energy savings. Rocky Mountain Institute calls those benefits deep retrofit value.

A recent study (PDF) from the University of Notre Dame helps assign measurable value to the more abstract productivity gains generated through the deep retrofit process. The study compares PNC's "regular" and LEED-certified bank branches, examining 494 facilities in the United States. The sample contained 52 LEED-certified and 442 non-LEED-certified branches, all with similar annual revenue streams and market demographics, excluding facilities less than three years old. These controls provide a comparison between facilities located in similar business contexts where discrepancies in performance cannot be easily explained by other factors, such as reputation or customer market base. Along with the appreciable cost savings that accompany a LEED certification — certified branches spent $675 less per employee on utility bills — the study found that "certification makes a significant difference on revenue generating aspects of the business" and that these savings go "above and beyond cost measures."

The effects of these changes on PNC's business were significant. In contrast to non-LEED certified facilities, each LEED certified branches opened more consumer deposit accounts annually (458), had about $3 million more in consumer deposit balances, initiated 25.5 more consumer loans and held nearly $1 million more in loans. These results were statistically significant even after controlling for all the major variables used to track influence on revenue, such as market demographics, size of facility, personnel demographics, age of facility and advertising spent annually per facility, according to the report. Thus, energy efficiency measures normally quantified in terms of kilowatt-hours conserved and savings generated other indirect value that also accrued to PNC's bottom line. 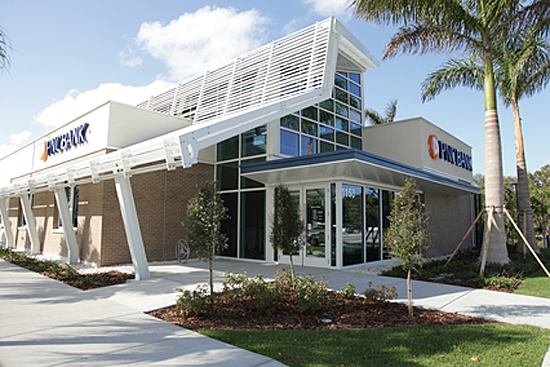 Although the study did not attempt to tease out exactly what factors improved the performance of LEED-certified buildings, it'd be reasonable to infer that bank branch employees became more engaged and productive (including with branch customers) and the branch customers themselves enjoyed banking there more (including with a bank that aligns with their own personal views on environmental sustainability), or both. Other studies (PDF) on corporate social responsibility support this idea.

This study presents another proof point of compelling evidence showing that the financial benefits of environmentally sustainable business practices extend well beyond the immediate energy savings. PNC likely invests in energy-efficiency measures at its branches primarily for the energy cost savings, but studies such as the Notre Dame one show that PNC and other corporations also can take deep retrofit value all the way to the bank.

See all by Zach Donnenfeld