As signs emerge that the global energy sector is beginning to rein in what once had been unbridled levels of climate-changing pollution, new United Nations figures show pollution from farming is continuing to get worse.

Greenhouse gases released from the growing of crops and livestock directly increased by a little more than 1 percent in 2014, compared with a year prior, the newly updated data shows.

Burning fossil fuels for energy grew by about half that amount during the same period, research published in December showed, with further reductions anticipated for 2015. That’s seen as a key first step toward achieving the vast pollution reductions needed to start to stabilize the climate.

The new U.N. figures do not include greenhouse gas impacts from deforestation or other clearing of land to make space for farms, which are slowly being reduced overall.

"Fossil fuel emissions are stabilizing, at least temporarily, because of less coal use in China and increased renewables and energy efficiency around the world," Stanford University professor Robert Jackson said after reviewing the new figures.

A growing global appetite for meat, particularly in countries whose economies are growing quickly, is helping to drive the growth in agricultural emissions of methane, which is a potent greenhouse gas.

More than half of farming’s direct climate impact in 2014 was caused by methane released by cows and other large livestock and from their manure. (The U.N.’s figures assume methane is 21 times worse for the climate than carbon dioxide, based on its powerful heat-trapping but short-lived properties.)

"Meat consumption is high in countries like the U.S. and is growing rapidly in China and other parts of the developing world," Jackson said. "Higher meat consumption means greater agricultural emissions." 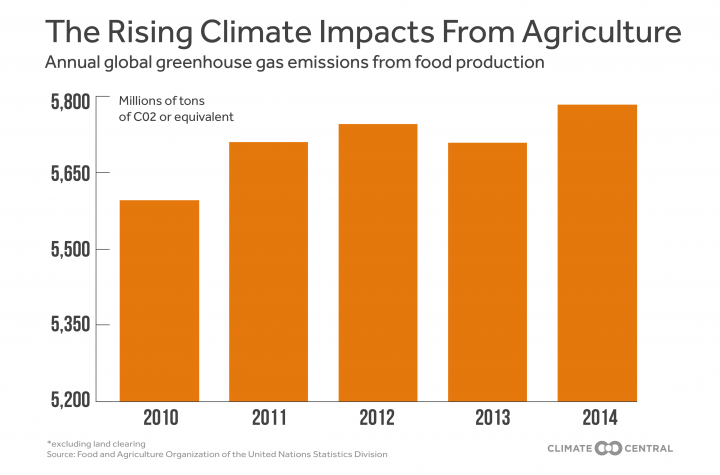 Taken together, pollution released by farming was directly responsible for the global warming equivalent of 5.8 billion tons of carbon dioxide, according to the figures, published Monday along with a brief statement.

That may seem like chicken feed compared with the 35.9 billion tons of carbon dioxide or equivalent that the energy sector released in 2014 from burning coal, oil, diesel and other fossil fuels, helping to explain why farming receives less attention than energy.

"The opportunities to improve management and decrease emissions are still very important for agriculture, even if it’s not the biggest piece of this pie," said James Gerber, a scientist at the University of Minnesota who worked with the U.N. to produce a story that described its new findings.

World temperatures have risen by nearly 2 degrees F since the Industrial Revolution, causing seas to rise, heat waves to intensify and corals to bleach and die.

A U.N. pact finalized in Paris in December that aims to prevent that temperature rise from doubling in the years ahead focuses heavily on the energy sector. Some countries made climate pledges under the treaty that emphasized environmental reforms of agricultural sectors.

"Most of the Paris commitments around agriculture emphasize soil carbon and land use, rather than tractors and farming practices," Jackson said. "This report suggests we need to pay more attention to farming practices and intensification of agriculture."

Methane happens: Why uncaptured emissions are a wasted opportunity

Fight Global Warming with Your Knife and Fork