For most people, thinking of a favorite sweater likely brings to mind descriptors such as soft and cozy, warm but breathable. Maybe it’s made of a fine Merino wool or cashmere.

Few are those who, when thinking of the sartorial pleasures of knitted clothing made of natural fibers, will conjure the effluvia of slaughterhouses.

Philipp Stössel is one of the few. Stössel, a doctoral student researching biomaterials science, looks for useful materials that can be made from agricultural waste.

Working with colleagues at the Swiss Federal Institute of Technology in Zurich, he has been perfecting a process to make warm yarns out of animal byproducts such as gelatin that can be knitted into clothing.

The motivation to turn the skin, bones and tendons of vertebrates into a wearable fiber comes, the group wrote, from an enormous supply of waste.

“The raw material, namely, slaughterhouse waste, accumulates at about 10 million tons per year in the European Union and the global gelatin market is expected to reach 450,000 tons in 2018,” Stössel and his coauthors wrote recently in a study published in the journal Biomacromolecules.

Taking gelatin from pig skin, they put it through a process of heating, doping and spinning that resulted in filaments.

The team was able to produce the filaments at a rate of more than 650 feet per minute in the lab. Around 1,000 filaments then were hand-twisted into two-ply yarn strands.

But as anybody who has made a bowl of Jell-O knows, any product made with gelatin that’s meant to last would need to contend with the fact that it readily dissolves in water. 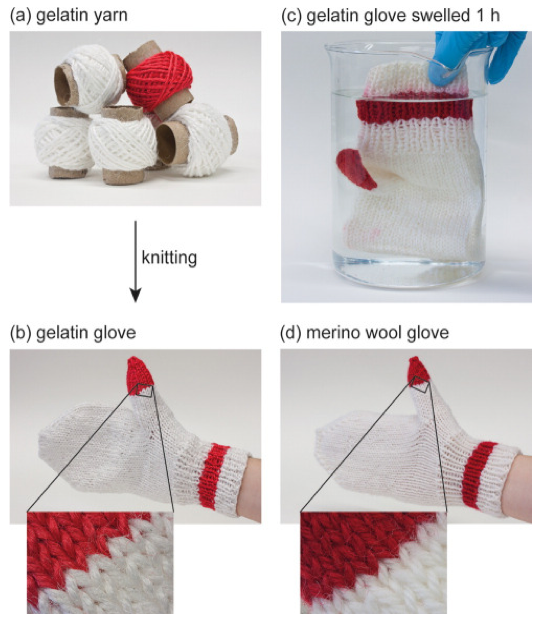 By using chemicals to cross-link molecules and then treating the material with formaldehyde and lanolin from sheep wool, the yarn was left sufficiently water-resistant to withstand dunking multiple times in water or detergent solution.

They next knitted the gelatin yarn into a glove and compared its water resistance and insulating ability against a control glove produced with Merino wool.

“Altogether, the gelatin cloth showed very similar, or even slightly superior, thermal resistance to the [M]erino sheep wool,” they found.

Neither wool nor gelatin fiber insulated as well as synthetic polyester fleece fabric or expanded polystyrene.

Putting the yarns under an electron microscope, the researchers found that individual filament surfaces were smooth like synthetic fibers such as polyester and not like the scaly surfaces of sheep wool that are produced by overlapping cuticle cells. Looking at the filaments in cross section, they found long air spaces that ran the length of the fiber.

Several problems arose in producing the fiber, including weakness in it after the water-resistance treatments. Tests showed that fully treated gelatin yarn strength was only around 45 percent that of merino wool.

Still, the glove they knitted with it insulated about as well as Merino wool.

“Protein fibers are increasingly attractive for numerous applications where, for example, high-performance mechanical properties are dispensable,” the group concluded in its study. “The applications may range from the biomedical field, where proteins such as gelatin or collagen are desired because of the similarity to tissue constituents, to textiles.”

Why Nike and MIT see textiles as material to climate change