This power-beaming approach could light up underwater exploration, disaster sites

This is the latest in an ongoing series exploring early-stage technologies and scientific developments that could play a role in corporate solutions to climate change. (The previous installments are here.) Email ideas and pitches to [email protected].

Could lasers bring electricity to faraway places, cutting back on the need for replacement batteries or diesel generators?

PowerLight Technologies, an 11-year-old company originally energized by a NASA design challenge, is attempting to commercialize technology that does just that. The approach sounds deceptively straightforward: the equipment the Seattle-based organization has developed converts electricity into high-intensity light, which is then "beamed" to a high-efficiency receiver using either "free space" or fiber optic cables that run over (or under) the ground or underwater. Then, the light is switched back into a usable form where it’s needed.

The company successfully has transferred 300 watts of electricity over a distance of 1 kilometer, an achievement that its executives say has yet to be matched by other companies working on wireless and over-the-air alternatives to charging or delivering power. When you’re talking about wireless charging, anything more than a few inches away is apparently considered long distance.

"We have kept a low-profile to be ready to go out and test the market," said Claes Olsson, chairman of the company. "And now we feel we are ready."

The company successfully has transferred 300 watts of electricity over a distance of 1 kilometer.

PowerLight, originally called LaserMotive, was co-founded by several engineers and physicists including CEO Richard Gustafson and CTO Tom Nugent. It became a venture after the team successfully won a NASA challenge for the development of power-beaming technology back in 2009. The specific goal was to demonstrate systems that beamed energy from the ground to a robot, enabling it to climb a vertical cable. (The team’s robot was named Otis, after the elevator company.)

Since then, the company has won an additional NASA award. It has tested more than five generations of technology in collaboration with several U.S. military agencies including the Navy and the Department of Defense.

Myriad applications could benefit from the sort of technology PowerLight is developing. The military, for example, is studying it as a way of delivering power to unmanned aerial vehicles (that is, drones), in order to keep them in the air longer. The technology also could be useful for keeping remote communications stations or outposts online, for example, in the case of disaster relief efforts — or for powering other places where electricity is needed temporarily, such as a construction site. Previously, these sorts of installations usually have had to make do with generators powered by diesel fuel.

As it explores commercial opportunities, PowerLight is focusing initially on applications that will use the equipment in its tethered form, over standard fiber optic cables, said Bob Zak, who leads marketing and business development for the organization. At a basic level, it’s akin to the way certain telecommunications networking routers rely on "power over Ethernet," which uses a single cable both to power the device and to handle data transfers. 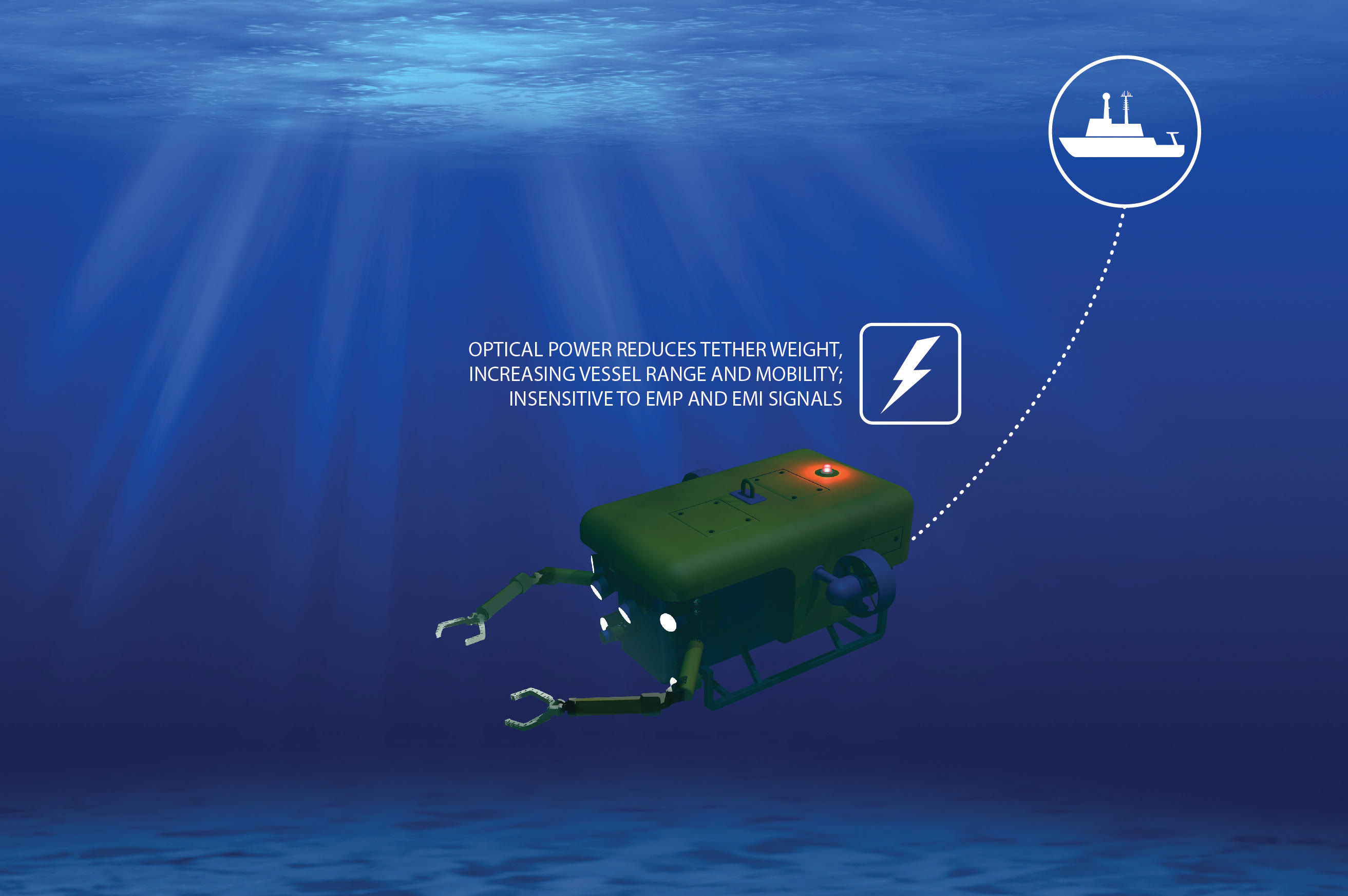 One example that PowerLight’s team is talking up centers on helping power underwater vehicles and equipment, such as the type used for rescue missions or ocean mining and research activities. They need power not just to run but also to collect data. Today, these machines usually receive electricity from thick and heavy copper cables that become more inefficient that deeper they are asked to do.

Because fiber optic cable is considerably lighter and 10-times less thick in diameter, PowerLight’s approach would allow the equipment to be used at greater depths for longer periods of times, according to the company’s marketing materials.

PowerLight also is evaluating the feasibility of aerial applications for this tethered application, such as (hypothetically) keeping a drone up in the air at 400 feet for four hours, Zak said. Again, because the fiber optic cable is lighter than traditional copper, it takes less power to keep the drone airborne. Fiber also "eliminates a detectable electrical signature, which is important for certain stealthy applications," according to the company’s website.

One objection or concern raised about the PowerLight technology has to do with safety. "We’re using lasers, photovoltaics and fiber optics in ways that they haven’t been used before," Zak said. Potential users need to consider that unknown factor, even though there are potential downsides of copper wire (overheating or even sparks, to name just two). To address that concern, the company is forging relationships with equipment manufacturers.

A number of other startups and ventures are working on wireless charging scenarios. They include a team at former Microsoft executive Nathan Myhrvold’s Intellectual Ventures, working on a proof-of-concept system that uses microwaves. As of a year ago, its researchers had so far been able to light up an LED light array across a lab and eventually hope to scale up to about 160 feet.

Other organizations worth ongoing attention include Wibotic, working on short-range "connector-free" charging systems for robots; uBeam, developing ways to charge via ultrasound; and Energous, which uses radio frequency signals to charge enabled gadgets such as mobile phones or tablets.

Where are they now? Catch up with 30 Under 30 alumni

Episode 226: Voices of the GreenBiz 30 Under 30, Stephen Ritz on food justice

To B or not to B? More tech companies should ask themselves that question