The Toyota Prius Plug-In Hybrid isn't expected to be commercially available until 2012, but the InterContinental San Francisco has brought one to the hotel in partnership with Zipcar and the firm City Park, and now has a charging station on the property, too.

Carsharing, the hybrid plug-in and the charging station are three of the latest eco amenities added at the InterContinental San Francisco, which has earned LEED-Gold certification from the U.S. Green Building Council. The hotel and its business partners recently celebrated all four developments.

"We are continually looking to take our green efforts at the InterContinental San Francisco to the next level," said General Manager Peter Koehler, who confided to the group gathered for the celebration that as one of the few hotel general managers in town who doesn't keep a car, he's used Zipcars to get around.

Koehler said the hotel's accomplishments were made possible by the hotel owners, "who gave us the freedom we needed to achieve LEED-Gold." He also praised Harry Hobbs, the hotel's director of engineering, for being a leading force in property's ongoing sustainability drive. 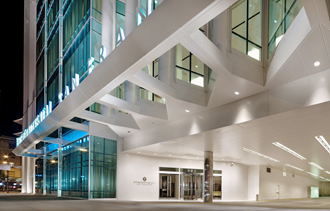 Opened in 2008, the 32-story, 550-room hotel is the first in the InterContinental Hotels & Resorts brand to receive USGBC Leadership in Energy and Environmental Design certification under the assessment system's standard for the operation and maintenance of existing buildings, known as LEED-EBOM. The InterContinental San Francisco announced its certification in February, saying it had become the largest hotel in the state to receive LEED-EBOM, the third largest in the country to do so and one of just 13 that had received certification thus far under the standard.

Three Zipcars -- a Scion xB, Mazda 3 and a Mini Clubman -- arrived at the hotel about two months ago, and the ParkPod charging station and the Prius PHV were added this month, with the hybrid electric car becoming available last week. The Prius PHV can fully charge within three hours and travel on the charge at speeds as high as 62 mph for about 13 miles before shifting to conventional Prius hybrid operation, which averages 50 miles per gallon.

The vehicle is one of eight Toyota PHVs that Zipcar is offering this year in its carsharing program around the country, said Dan Grossman, Zipcar's regional vice president for the West. Three, including the one at the hotel, are in San Francisco, three are in the Boston-Cambridge area and two are in Portland.

The availability is part of a pilot program between Zipcar and Toyota Motor Sales U.S.A., which in turn is part of Toyota's distribution of 160 cars in the U.S. to introduce the vehicle. Grossman thanked the InterContinental and City Park, the operator of the hotel's parking services and the garage, for participating in his company's test of the market's appetite for plug-in, shared vehicles.

City Park has a strategic alliance with Zipcar and played a key role in the placement of the plug-in hybrid and the three other Zipcars at the InterContinental. The San Francisco-based parking company also financed and purchased the ParkPod charging station, which sits in the hotel's porte cochere. "Zipcars live here," said Spencer Sechler, City Park's director of marketing and sales, borrowing a catchphrase from the carsharing company. Actually, about 100 Zipcars reside at various City Park locations and the company aims to expand availability this year, bringing the count to about 125 vehicles, according to Sechler.

Bringing shared cars, a hybrid plug-in and a charging station to the InterContinental was a "natural progression" for the hotel, said Hobbs.

Environmental design and operation are central to the property that emphasizes energy efficiency, green power, waste diversion and recycling, water conservation, green cleaning inside and out, environmental education for visitors, the industry and employees, an active in-house green team and continuous improvement.

With a blue-glass exterior and floor-to-ceiling windows, the building is designed to capitalize on natural light. Controls are layered on the hotel's lighting systems, which include linear and compact fluorescent bulbs. The InterContinental also worked with Department of Energy's Pacific Northwest National Laboratory and PG&E to test next-generation LED lamps.

The hotel purchases renewable energy credits to offset 100 percent of its electricity use, has a solar-powered trash compactor, has elevators that operate with regenerative braking power and requires all new equipment to be Energy Star certified. The property has an 80 percent diversion rate and composts 100 percent of its food and landscaping waste. Water conservation fixtures and measures have cut guestroom consumption by 22 percent and reduced consumption in all hotel restrooms by an average of 30 percent without affecting visitors' experience, the hotel company says.

The hotel also provides card keys made from recycled plastic, has a green meeting program, and offers guests a choice of participating in the property's energy-saving temperature control program by pressing an in-room ecoMODE smart thermostat button. Besides achieving the gold-level LEED-EBOM certification, the hotel received an Energy Star rating of 86 in 2010, up from a rating of 76 in 2009.

In addition, the hotel was among the San Francisco businesses that supported the city's recent legislation to require energy auditing and benchmarking for commercial buildings. Hobbs said in a GreenBiz article earlier this year that the hotel saved $200,000 on its energy bills in 2010 as a result of its efforts and credited benchmarking for guiding their way.

Dan Geiger, the executive director of the USGBC Northern California Chapter, said efforts like those of the InterContinental help San Francisco be on the leading edge when it comes to green. The hotel has demonstrated that greening commercial buildings is "not just environmentally sustainable," Geiger said. "It is also financially sustainable."

Earlier this year, the InterContinental Hotels Group -- which encompasses seven brands including Holiday Inn and Crowne Plaza -- scored a green building “first” as a hospitality chain.

The hotel company became the first to attain LEED volume pre-certification for existing buildings. Several firms have earned the designation, which enables expedited green building certification for structures built or operated according a pre-approved plan, for new construction. Targeting existing properties is significant because such buildings far outnumber new ones in any commercial portfolio.

The volume pre-certification for IHG validated the company’s Green Engage online sustainability program. Hotels across the portfolio can register to use the program -- more than 1,000 had done so by the end of 2010 -- and those that adhere to it can then seek LEED certification as an existing building. While the InterContinental San Francisco is the first in its brand to receive LEED-EBOM certification, other IHG hotels have received LEED certification for new construction.