With lots of private money flowing into clean energy innovation, can climate negotiators finally stop arguing about where the cash will come from?

The logjam that proved insurmountable when nations tried to reach a climate deal at the last big U.N. meeting in 2009 — money — has been broken at COP 21 underway in Paris.

At COP21 underway in Paris and in the months leading up to it, hundreds of billions of dollars have been committed from business and governments alike to finance clean energy innovations and carbon mitigation, creating some optimism that the world just might, after all, pursue a plan to stem climate change.

By comparison, the UN climate convention in 2009  in Copenhagen ended with no agreement but instead a virtual fistfight over who would pay for greenhouse gas mitigation and clean energy in Third World countries which are not responsible for today’s climate problems.

But the flurry of commitments and new investments this time around doesn't mean the deal is nearly done, nor all the money needed is in. Debates continue about how to require governments of rich countries to help pay for mitigation efforts in poor countries. The difference is that this time the private sector is putting forth some cash.

Financial commitments are impressive: from the billions expected from the Breakthrough Energy Coalition of 28 billionaires led by Bill Gates and CEOs of major companies who each promise major clean energy investments, to the related Mission Innovation by 20 governments to double their investment in clean energy, to the $3.4 trillion divested from fossil fuel investments and now looking for new home, to India's International Solar Alliance aiming to garner $1 trillion for solar energy infrastructure in equatorial countries.

But while total global climate finance money flow is estimated at $340 billion to $650 billion by the UNFCCC Standing Committee on Finance, much, much more is needed.

But while the total flow of global climate finance  is estimated at $340 billion to $650 billion by the United Nations' climate change finance committee, much, much more is needed.

"Trillions of dollars, not just billions, are needed to address climate change," noted the World Resources Institute on its WRI Outlet blog.

Indeed, the International Energy Agency (IEA) estimated in a "World Energy Outlook, Special Briefing for COP 21" (PDF) that fulfilling all of the promises or INDCs put forth by the 160 countries that submitted them by mid-October would require $13.5 trillion worth of investment between now and 2030. And yet the INDCs, or Intendeded Nationally Determined Contributions towards COP 21, would not be enough to prevent global warming from exceeding another 2 degrees Celsius, which is the goal of the climate talks.

Still, the gush of new investment dollars headed for clean energy finance marks something significant underway, something businesses involved in energy or agriculture or industrial parts might want to heed.

"There's been an important shift in the framing" about the investment needed to slow climate change, said Val Smith, director of corporate sustainability at Citi.

"Our clients perceive it as a business opportunity, and banks driven by client demand see it as an opportunity. That shift has happened and there is a strong sense in the business community that we are ready to get on with it — and we are getting on with it."

But, Smith added, returning to the global situation that COP21 negotiators must respond to, "it is also fair to say there is still a lot of work to be done."  She noted that the $13.5 trillion of needed investment to fulfill COP 21 promises estimated by the IEA breaks down to $900 billion a year for the next 15 years.

Goldman Sachs, meanwhile, sees an imminent unlocking of a $600 billion in revenue opportunity in low-carbon industrial and commercial activity, it says in a report the Low Carbon Economy  published on the eve of the COP 21 meeting.

"We estimate that these technologies will save (greater than) 5 Gt (gigatonnes) of CO2 per annum by 2025 and could help global emissions to peak earlier than expected around 2020, with ripple effects felt across our global coverage."

It also expects that in 10 years LEDs will dominate the lighting industry with a 95 percent market share and that solar and onshore wind will capture 51 percent of the electricity market. Meanwhile, hybrid and electric car wlll represent 22 percent of all car purchases in 10 years. 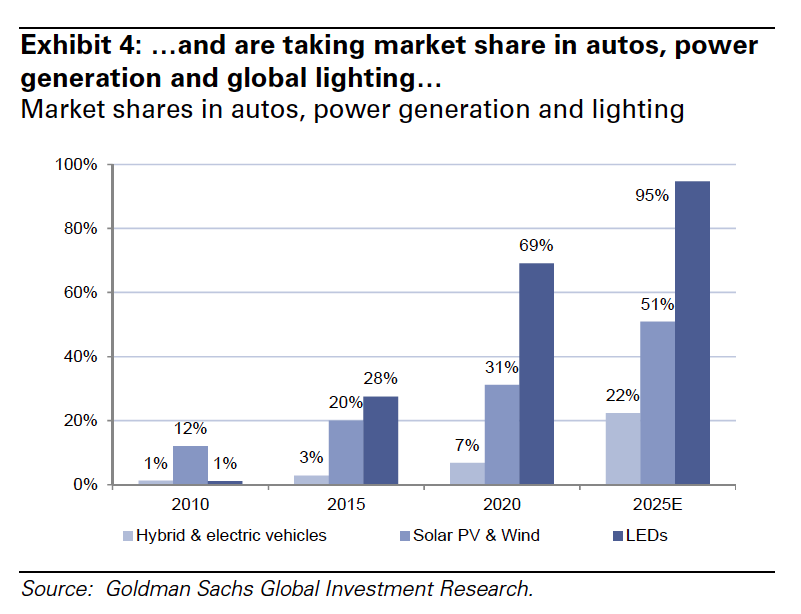 But what about developing countries' adaptation?

The squabbles between rich and poor countries that brought down the Copenhagen climate meeting in 2009 focused on who would pay for an estimated $100 billion a year developing nations need for climate change mitigation and adaptation.

While mitigation could mean investments in renewable power plants, adaptation often means such work as restoring wetlands or building levies, which do not generally produce returns that attract investors.

A year later when climate delegates met in Cancun, they agreed to set up a Green Climate Fund which wealthy countries would pay into to help developing nations with mitigation and adaptation. The aim has been to ramp up donations from donor nations to $100 billion a year by 2020.

The level of contributions to the Green Climate Fund continues to be contentious even at the current climate talks, although Canada and France have stepped up lately with big commitments. The Green Climate Fund's work to date has yet to inspire confidence. The Washington Post reported this week that the Green Climate Fund has funded only $168 million worth of projects so far as it goes through a slow process of organizing itself, hiring staff and determining rules of engagement among the nations involved.

So one legacy of COP 21 may be the emergence of the private-public collaboration around financing the changes needed to abate climate change: the Mission Innovation partnership with Breakthrough Energy and the target funds that the large financial services firms have.

After all, despite the paltry lending the Green Climate Fund has done, the Organization for Economic Cooperation and Development estimates that $62 billion in public and private funds were garnered for developing countries last year, following $52 billion in 2013.

Goldman Sachs states that it is ready to help developing nations, but on its terms.

"As part of this goal, we will play a catalytic role by facilitating financial innovations in clean energy. To this end, we will seek to devise investment structures that bring greater investor capital to underserved markets and facilitate more equitable and affordable access to clean energy," it stated in its Environmental Policy Framework — a sort of investment philososphy for the sector.

It said it created a Clean Energy Access initiative for underserved markets and plans for some funding to go to resiliency.

The success of private financing reaching all corners of the world that need to deal with climate change remains to be seen, however. Some of the poorest regions of the world that most need clean energy finance to build out electricity systems do not have the infrastructure in place to receive big investments, some experts note. Infrastructure missing in remote regions of the world include not only roads and sewer systems but also local banks, working contractual laws and engineering workforces.