Private enterprise is investing hundreds of billions every year to grow the green economy, totaling $1,646,719,228,993 in investments since 2007.

That very precise number is the finding of the the latest Green Transition Scoreboard, developed and released yesterday by Ethical Markets. The $1.6 trillion dollars invested in the last three years includes more than $400 billion since the last update, just eight months ago.

"The GTS is an important milestone in measuring the increasing economic viability of the CleanTech universe," said Stuart Valentine, president of Iowa Progressive Asset Management, a leading U.S. investment firm. "Since 1987, we have guided our investors towards companies leading the growing green economy: the Sustainability Sector."

The Scoreboard, created by Hazel Henderson, futurist and author of "Ethical Markets: Growing the Green Economy," aims to measure "concrete progress as we traverse this great global transition from the Industrial Era to the information-rich, cleaner, healthier and greener Solar Age," Henderson said in a statement announcing the release of the Scoreboard. 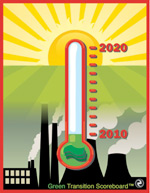 "The mid-2010 total of over $1.6 trillion puts G-20 countries on track to reach our 2020 target of $10 trillion," said Timothy Nash, Ethical Markets' Senior Advisor and Director of Sustainability Research, in a statment. "This figure has outpaced even the most optimistic expectations for investments in the green economy, providing tangible evidence that investors are shifting their assets and that momentum is building for a green economic transition."

The report breaks down investments in clean and green technologies into five categories, and shows their total investments since 2007 as follow:

The Scoreboard also shows year-over-year investments in each sector, which reveal that, despite the Great Recession, investments have stayed steady or grown for each category. Investments in Smart Grid technologies, for instance, grew from $17 billion in 2008 to $25 billion in 2009, and is on pace to reach $29 billion or more in 2010.

These figures do not include substantial investments from national governments, as in the case of the Stimulus Act passed in 2009.

Also notable in the report are company-by-company breakdowns in R&D figures. Among the leaders in R&D investments are, perhaps unsurprisingly, General Electric and IBM, which have invested $3 billion and $2 billion, respectively, in their ecomagination and Smarter Planet initiatives. Corning and PG&E also top the list with $1.5 billion and $1 billion in investments, respectively.

The full scoreboard is available for download from GreenBiz.com; for more information, visit GreenTransitionScoreboard.com.

Episode 274: The nuances of net zero