Procter & Gamble has been cautious in its treatment of green certifications. "There are a lot of seals out there," said Chris Guay, a regulatory fellow at the consumer products giant.

However, one green seal not only caught its attention, but also offered the credibility the global packaged goods giant was looking for. With $83 billion in sales last year, P&G has now qualified two products under Good Housekeeping’s green seal: Tide Coldwater Laundry Detergent and Pampers Cruisers diapers for toddlers.

Good Housekeeping launched its Green Seal two-and-a-half years ago into a marketplace growing crowded with eco products, and where consumers faced a dizzying array of green certifications.

The history and iron-clad guarantee of the magazine's century-old Good Housekeeping seal gave the new mark instant cachet. But how has the seal fared over the last 36 months?

I got the opportunity to catch up on Good Housekeeping’s green seal efforts, as well as the evolution of eco-labeling, last week at a luncheon and tour of the magazine’s in-house testing labs. I spoke with the program’s head, along with executives representing some of the latest products to earn the green mark.

The verdict? A couple of years on, the seal has matured, broadening the number of products and categories Good Housekeeping’s white-coated scientists have scrutinize, trialed, and dismantled to identified the greenest.

Still, despite the mark’s rigor, its potential impact remains narrow. By definition, the seal is awarded only to products advertised in the magazine and which pass eco-criteria above and beyond standards set by the magazine’s more familiar product seal.

And the mark is playing in a field that has arguably been tougher to crack than many brands first anticipated. "It’s proven tough for eco labels, marks, and certifications in the U.S. They aren’t as popular here compared with Europe," said Michael S. Brown, co-founder of Brown and Wilmanns Environmental, which advised Good Housekeeping on the seal. "It’s a really hard road for an eco label to climb into consumer consciousness in any serious way."

P&G, for instance, places a high priority on the reputation of potential partners. In the green seal space, there are relatively few long-serving, proven seals. "We don’t want to put our name on just any green seal," said Guay of P&G. "Once it’s on your product, then you’re joined at the hip."

"Apart from Good Housekeeping, the only ones that consumers broadly know are Energy Star, the 'organic' label, and maybe one or two others," Brown said in a telephone interview. "And of those that are known, it’s because there’s been a huge amount of marketing of just the labels themselves." The recession and uncertain economy, too, have chilled early enthusiasm for green products.

In the face of these headwinds, the green seal’s steady progress deserves credit. "Consumers have reason to be very cynical about promises and claims. People are inundated with product claims that demand so much research," said Miriam Arond, the director of Good Housekeeping Research Institute. "They’re hungry for guidance."

"We have taken this slow and steady," she added, emphasizing the quality of certifications over their number. "Companies are frustrated. They’re making environmental advances, but it’s such a complicated story for them to tell consumers. For them, the Green Good Houskeeping Seal sends a simple, clear message."

Guay of P&G echoed that point. Because the Green Good Housekeeping Seal evaluates not just the product but broader corporate sustainability practices, he said, "As a company, you can’t be accused of picking high points here and ignoring the low points there."

The seal's message is built on a century-old tradition established by the original Good Housekeeping Seal, which debuted in 1909. It was a time of perilous product practices. In 1904, Upton Sinclair’s The Jungle documented terrifying conditions in Chicago’s slaughterhouses, and crystalized public outrage over the lack of food standards or product safety liability.

Against this backdrop, Good Housekeeping made an unprecedented promise: if any product bearing the mark proved defective, the magazine would replace it or refund its price. More than a century later, the seal survives. It has even entered our language as shorthand, routinely used to explain similar authentication efforts: "It’s the Good Housekeeping seal of approval."

Products for the green seal program must go through a multi-step process. Once the Good Housekeeping Institute approves a product for advertising, it can then be submitted for a conventional seal of quality. If granted, the product can then apply for a separate Green Good Housekeeping Seal.

At this stage, the product is put through a deeper evaluation based on life cycle assessment (LCA) practices. Detailed here, the process looks at a wide range of factors, from upstream variables such as raw materials, manufacturing, and supply chain, to down stream issues, including, packaging and product use, explained Michael.

Good Housekeeping’s long focus on quality has drawn brands, like P&G, that have eschewed other green labeling efforts.

For Benjamin Moore, the certification process proved a tough challenge, which has triggered deeper changes. "We had never been through anything quite like this process," said Carl Minchew, director of product development. Benjamin Moore’s Natura line of interior paints was awarded a Green Good Housekeeping Seal in May 2012.

"We’re looking at other places and other ways of improving our products based on this input," he added. "Maybe that’s a side intent of the process."

Minchew is right on the money, responded Arond. "The goal is to get companies to raise the bar," she said. The standards have been designed to be a stretch from the outset, and will be upgraded as practices change. "What’s green today may not be a stand out two years ago," she added. "The standards will have to shift to raise the bar."

By that measure, perhaps the greatest long-term impact of Good Housekeeping green seal will be how it trickles down into the magazine’s more familiar seal. Methods from the green seal are changing the way the institute evaluates all of its products.

Arond recounted a brand of mascara she declined to identify. "It performed great. But we’ve gotten to learn a lot more about product chemistry and just weren’t comfortable with the ingredients," she explained. "Women liked it. But we couldn’t recommend it in the magazine." 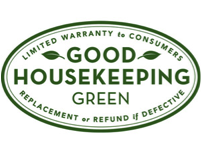 When launched in 2009, the Green Good Housekeeping Seal initially included only beauty and cleaning products. In 2011, it extended the standard to include appliances and paper products. Earlier this year, rules for paints and coatings were added.

Here’s the current roster of products granted the Good Green Housekeeping Seal. Note that products are certified for two years, after which they must reapply.

The links below go directly to product pages. For deeper detail on the specific green virtues singled out by Good Housekeeping’s labs, check out the detailed summary of current awardees at this link.

Could a 'carbon coin' solve the climate crisis?