2017 was the worst year on record for hurricane damage in Texas, Florida and the Caribbean from Harvey (PDF), Irma (PDF) and Maria (PDF). We had hoped for a reprieve this year, but less than a month after Hurricane Florence devastated communities across the Carolinas, Hurricane Michael has struck Florida.

Coastlines are being developed rapidly and intensely in the United States and worldwide. The population of central and south Florida, for example, has grown by 6 million since 1990. Many of these cities and towns face the brunt of damage from hurricanes. In addition, rapid coastal development is destroying natural ecosystems such as marshes, mangroves, oyster reefs and coral reefs — resources that help protect us from catastrophes.

In a unique partnership funded by Lloyd’s of London, we worked with colleagues in academia, environmental organizations and the insurance industry to calculate the financial benefits that coastal wetlands provide by reducing storm surge damages from hurricanes. Our study, published in 2017, found that this function is enormously valuable to local communities. It offers new evidence that protecting natural ecosystems is an effective way to reduce risks from coastal storms and flooding.

Coastal wetlands and flood damage reduction: A collaboration between academia, conservation and the risk industry.

The economic value of flood protection from wetlands

Although there is broad understanding that wetlands can protect coastlines, researchers have not explicitly measured how and where these benefits translate into dollar values in terms of reduced risks to people and property. To answer this question, our group worked with experts who understand risk best: insurers and risk modelers.

Using the industry’s storm surge models, we compared the flooding and property damages that occurred with wetlands present during Hurricane Sandy to the damages that would have occurred if these wetlands were lost. First, we compared the extent and severity of flooding during Sandy to the flooding that would have happened in a scenario where all coastal wetlands were lost. Then, using high-resolution data on assets in the flooded locations, we measured the property damages for both simulations. The difference in damages — with wetlands and without — gave us an estimate of damages avoided due to the presence of these ecosystems.

Our paper shows that during Hurricane Sandy in 2012, coastal wetlands prevented more than $625 million in direct property damages by buffering coasts against its storm surge. Across 12 coastal states from Maine to North Carolina, wetlands and marshes reduced damages by an average of 11 percent.

These benefits varied widely by location at the local and state level. In Maryland, wetlands reduced damages by 30 percent. In highly urban areas such as New York and New Jersey, they provided hundreds of millions of dollars in flood protection. 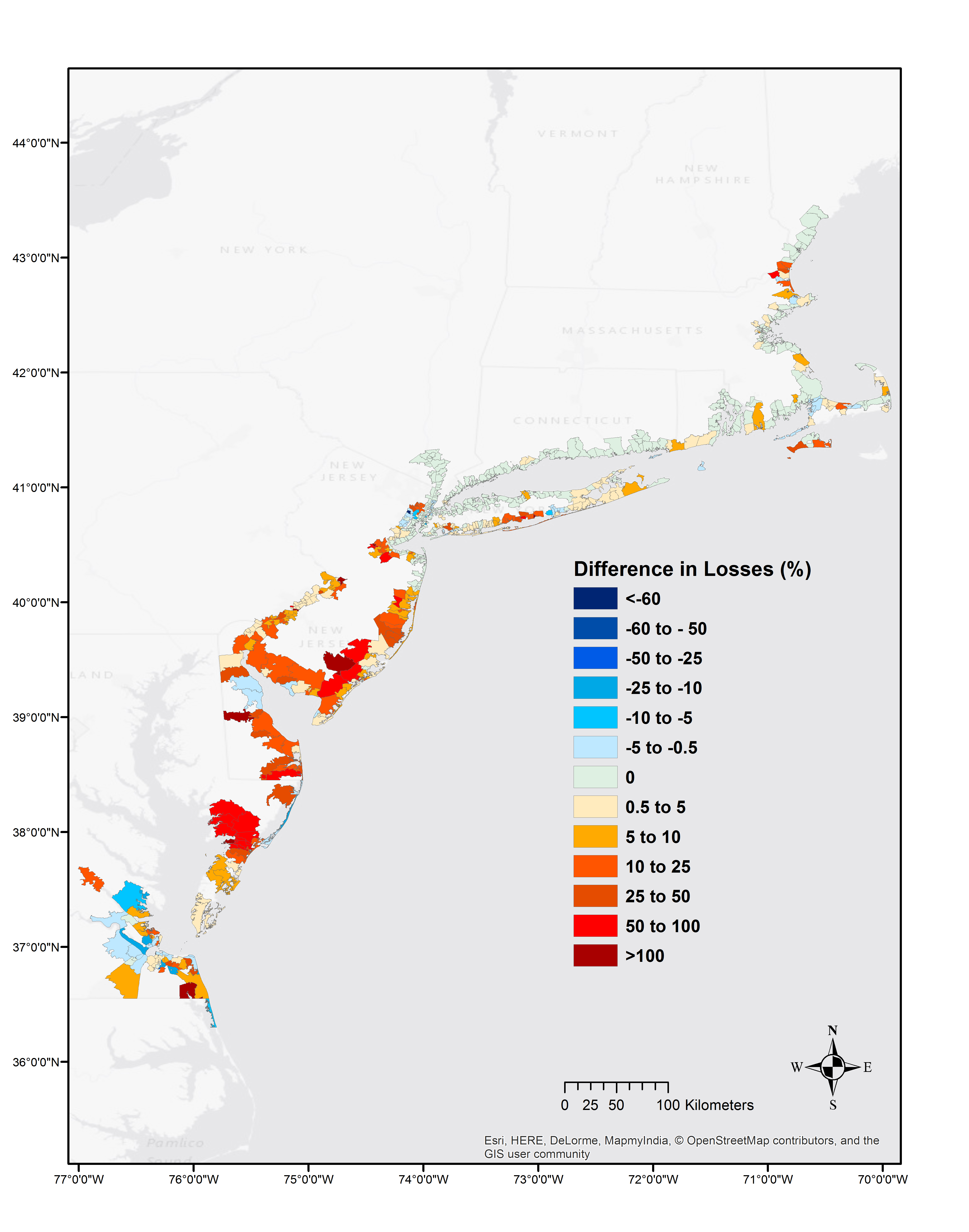 Wetlands reduced damages in most locations, but not everywhere. In some parts of North Carolina and the Chesapeake Bay, wetlands redirected the surge in ways that protected properties directly behind them, but caused greater flooding to other properties, mainly in front of the marshes. Just as we would not build in front of a seawall or a levee, it is important to be aware of the impacts of building near wetlands.

Wetlands reduce flood losses from storms every year, not just during single catastrophic events. We examined the effects of marshes across 2,000 storms in Barnegat Bay, New Jersey. These marshes reduced flood losses annually by an average of 16 percent, and up to 70 percent in some locations.

In related research, our team also has shown that coastal ecosystems can be highly cost-effective for risk reduction and adaptation along the U.S. Gulf Coast, particularly as part of a portfolio of green (natural) and gray (engineered) solutions.

Our research shows that we can measure the reduction in flood risks that coastal ecosystems provide. This is a central concern for the risk and insurance industry and for coastal managers. We have shown that these risk reduction benefits are significant, and that there is a strong case for conserving and protecting our coastal ecosystems.

The next step is to use these benefits to create incentives for wetland conservation and restoration. Homeowners and municipalities could receive reductions on insurance premiums for managing wetlands. Post-storm spending should include more support for this natural infrastructure. And new financial tools such as resilience bonds, which provide incentives for investing in measures that reduce risk, could support wetland restoration efforts too. 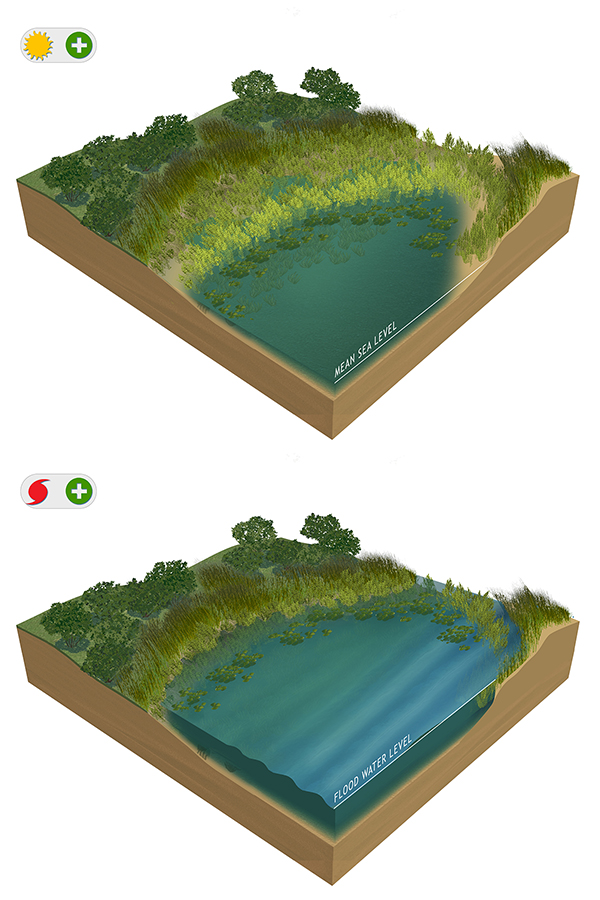 The dense vegetation and shallow waters within wetlands can slow the advance of storm surge and dissipate wave energy. USACE

Increasingly, communities are also beginning to consider ways to improve long-term resilience as they assess their recovery options.

There is often a strong desire to return to the status quo after a disaster. More often than not, this means rebuilding seawalls and concrete barriers. But these structures are expensive, will need constant upgrades as sea levels rise, and can damage coastal ecosystems.

Even after suffering years of damage, Florida’s mangrove wetlands and coral reefs play crucial roles in protecting the state from hurricane surges and waves. And yet, over the last six decades urban development has eliminated half of Florida’s historic mangrove habitat. Losses are still occurring across the state from the Keys to Tampa Bay and Miami.

Protecting and nurturing these natural first lines of defense could help Florida homeowners reduce property damage during future storms. In the past two years, our team has worked with the private sector and government agencies to help translate these risk reduction benefits into action for rebuilding natural defenses.

Across the United States, the Caribbean and Southeast Asia, coastal communities face a crucial question: Can they rebuild in ways that make them better prepared for the next storm, while also conserving the natural resources that make these locations so valuable? Our work shows that the answer is yes.

This is an updated version of an article originally published Sept. 25, 2017.

How to build resilient coastlines