The protein transformation: hyperbole or reality?

"Isn’t it fascinating there’s a responsibly farmed shrimp cocktail and a vegan section on the menu" of the Marriott’s Lincoln Steakhouse, mused moderator David Bennell, manager of food, land and water for the World Business Council for Sustainable Development (WBCSD), as he kicked off the Protein Transformation workshop last week to a packed audience at GreenBiz 20.

Asking panelists to give their take on whether the trend is hyperbole or reality, Bennell affirmed: "At WBCSD, we believe there is something really profound going on in the need for food systems transformation," from the perspective of both human health and planetary health.

With an estimated 3 billion more mouths to feed by 2050, and meat production’s huge toll on land, water, biodiversity and greenhouse gas emissions, the need for that transformation couldn’t be clearer.

"It’s climate, it’s water, it’s biodiversity, it’s forests, all of those things are mixed into the urgent need to shift the diet, particularly in high consuming regions like the U.S. and Europe," Janet Ranganathan, vice president for science and research at the World Resources Institute and author of "Creating a Sustainable Food Future," said in a later interview. "Accelerating the shift toward more plant-based protein, particularly among countries that are high consumers of meat right now is absolutely critical."

So, is that transformation occurring, and is it moving fast enough? Here are four takeaways from the session.

Yes, it’s happening, and there’s a lot of business opportunity

Maple Leaf Foods, one of Canada’s largest and oldest food companies, producing pork, poultry and plant-based protein, is a poster child for the trend. Tim Faveri, vice president of sustainability and Shared Value at Maple Leaf Foods, described how a 2008 crisis (a listeria outbreak) led his company to rethink its business strategy and move towards a model of shared value.

"We know there are significant impacts the industry is making, and we want to be at the forefront of making a difference in solving and contributing to be part of the solution as opposed to part of the problem," Faveri said.

We don’t suggest eliminating meat and dairy from diets. We have to find ways to make both systems sustainable and responsible to satisfy as many possible dietary needs long-term.

Business growth is 30 to 40 percent with Maple Food’s plant-based lines and 8 percent within its animal protein lines, in line with North American trends, according to Faveri. "Protein transformation is a pretty good descriptor of what’s happened to Maple Foods over the last several years," he said.

Kathy Pickus, vice president of global sustainability with Griffith Foods, was similarly enthusiastic. Griffith Foods is a privately held, global company that sources ingredients, creates formulations and sells them to the food sector.

Pickus is excited to see partnerships forming between established food giants, which can "carve off some risk," and innovative new companies, citing her company’s partnership with Rebellyous, as well as efforts by Cargill and Tyson Foods.

Some voices were more tepid. Jack Scott, vice president of sustainability and responsible sourcing at Nestle, said, "We’re in a protein transformation of sorts, but not necessarily leaving animal-based protein behind. Nestle sees continued growth in both sectors."

Scott’s sentiment echoed that of Cargill Chief Sustainability Officer Ruth Kimmelshue, who spoke earlier in the day. "It will be a combination," she said during a GreenBiz 20 plenary session. "We will perhaps consume less beef, but because population is going to grow, total protein consumption will increase. Whatever we consume… all of those things will be produced more sustainability than they are today."

Regardless where individual companies may position themselves on the S-curve, NGOs in the room seemed to agreed that change is underway.

"I think we are transforming," said Hank Cauley, senior vice president, Center for Environmental Leadership in Business, at Conservation International. "To me the first indicator is the fact that McDonald’s is offering a non-meat burger in 1,500 stores in Germany. …The fact that you have major retailers like that offering [plant-based protein] is one indicator it’s moving in the right direction. The second indicator is that the beef industry is starting to attack it. They see it as a real risk to their business." 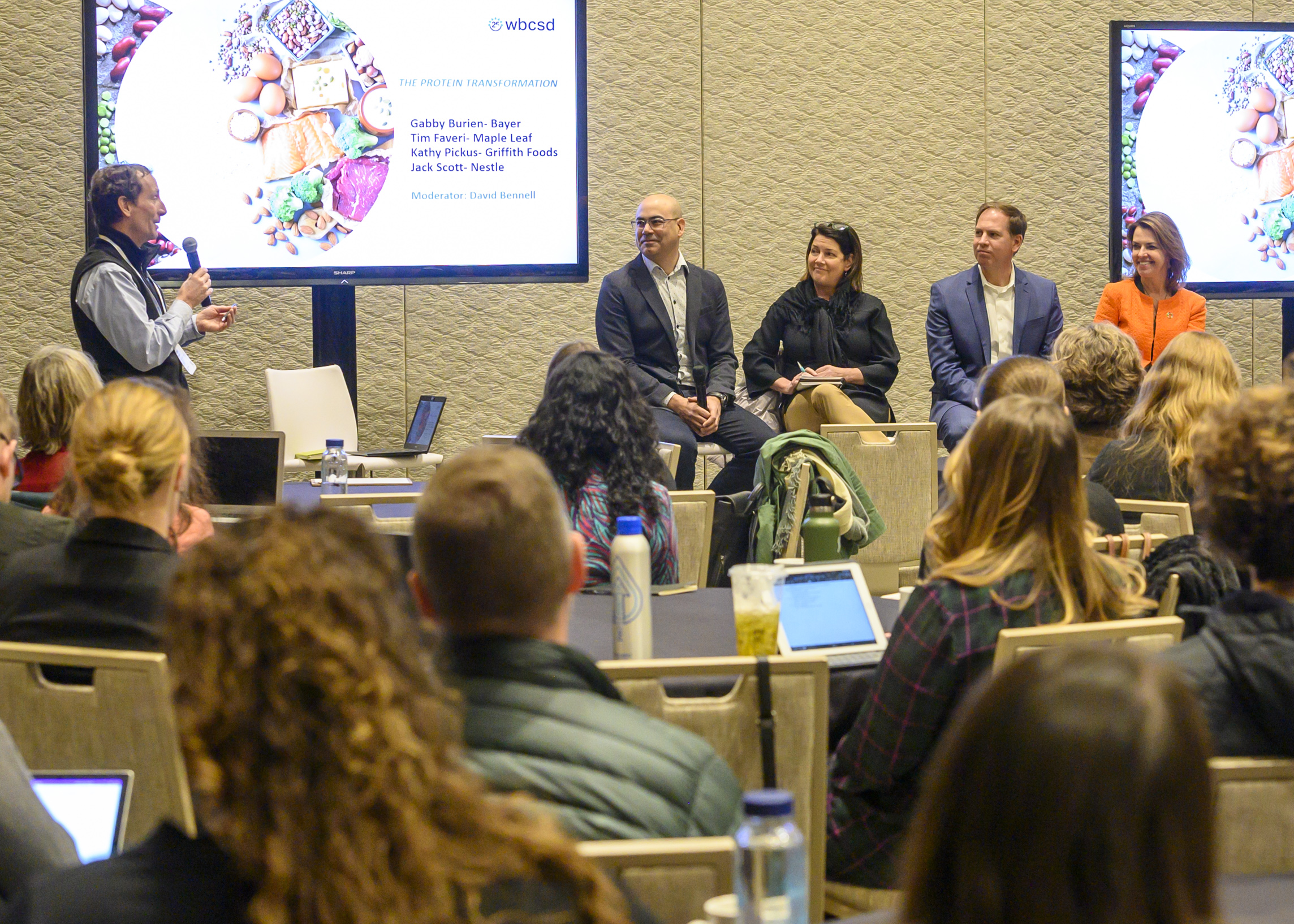 Moving beyond meat analogues: the next horizon

Querying the panel, Nina Goodrich, director of the Sustainable Packaging Coalition, noted that not all vegetarians want to eat something that looks, tastes or smells like meat. "When will food companies innovate plant-based products that can become something in their own right?" she asked.

Faveri agreed. "Many of these companies, one of our brands, are targeting the flexitarian consumer, who are willing to try something different. It’s a massive market, billions and billions in the next few years. But they’re not targeting true vegetarians."

Pickus added: It’s "where the next horizon is. There’s exciting innovation around new ingredients that are chock full of nutrients and have a positive impact on the environment."

She cited Griffiths’ partnership with Kuli Kuli, a West African company founded by a Peace Corps volunteer that produces a highly nutritious plant that can be included into products to elevate the nutritional composition. "It’s going to make food a little more interesting. It’s not going to be all chicken nuggets that are plant-based."

It’s not a zero-sum game, plant-based versus animal protein

All panelists were quick to say that consumers should be given choices. Nestle’s Scott was most vocal.

"People make the mistake in assuming that as one goes up, the other goes down," he said. "It’s not one against the other. We produce products with plant-based proteins because there are consumers with lifestyle, or health concerns, or climate change concerns who want plant-based proteins. But we don’t suggest eliminating meat and dairy from diets. We have to find ways to make both systems sustainable and responsible to satisfy as many possible dietary needs long-term."

Gabriela Burian, senior director of sustainable agriculture at Bayer, cautioned about the need to be responsive to cultural issues and historic imbalances between the Northern and Southern hemispheres. Burian said that as she travels in Africa and South Asia she hears a common refrain: "Those guys up there in the Northern Hemisphere are deciding everything we can or can’t eat here in the Southern Hemisphere. You guys have been eating meat all this time and now we cannot? That’s not fair."

Accelerating the shift toward more plant-based protein, particularly among countries that are high consumers of meat right now is absolutely critical.

Ranganthan agreed: "It’s not practical to set out a goal to convert everyone to a vegan diet, but reducing consumption, particularly of beef, can make a significant dent in the climate-related impacts."

The average American diet represents half of of each individual’s GHG emissions, if you consider the land impacts, she said, and the average American male consumes twice as much protein as he needs for his average daily requirements.

So, it may not be a zero-sum game, but as Ranganthan points out, meat consumption needs to come down, particularly for people in the United States and Europe.

Panelists were mixed about their role in educating consumers about the need to shift diets.

Scott said that for Nestle, "There’s a lot of value for some brands, but not for others. California Pizza Kitchen, yes, but once you go to Tombstone or Jack’s Pizza — no one’s asking for it. There’s only a certain consumer segment that’s interested in it."

Maple Leaf Foods developed a set of meat sustainability principles that includes eating meat in moderation as part of a healthy balanced diet, Faveri said, and it’s been "transformational for our internal organization."

Cauley would like to see more retail companies talking about the implications of the protein they’re offering to consumers, and agrees that linking health with environmental concerns is most effective.

Ranganthan thinks it will take a combination of product innovation, policy and getting pricing right — that is including the externalities into the price of meat — to shift consumer diets. "Business can influence governments," she said. "They’re very effective at that."

But "at the end of the day, it comes down to sustainable production practices," said Jack Kittinger, senior director of practice at Conservation International and a professor at Arizona State University, in a later interview.

"The idea that the changing consumer demographics of Gen Z are going to be fast enough and that consumer education and advocacy is going to be enough at the end of that supply chain and somehow trickle all the way down to the field, farm or ocean is a fundamentally false thesis."