Have you ever been to a focus group? They're very odd. Often used in marketing research, these small selections of randomly chosen people are brought together as a sampling of public opinion to gauge how folks feel about a particular product or issue.

Recently, my foundation conducted a focus group about global warming to see where people are at in their understanding of this complex and challenging problem. The results? Let's just say they were disconcerting, to say the least.

Simply put, most people don't have a clue. The majority felt that global warming was a very important problem and they were quite concerned about it. But when pressed as to why it was a problem or what caused the problem, all heck broke loose.

Apparently, according to the average Joe, global warming is happening because we've created a hole in the ozone layer, allowing the sun's rays to enter the atmosphere and heat up the earth - or something like that. The cause of the problem is cars, or airplanes, or aerosol cans. No one really knows for sure.

This is really quite remarkable. I would have thought that such confused understandings of the issue would have been commonplace five or six years ago, but with global warming being in newspapers on practically a daily basis this spring, on the front cover of magazines, in theatres (An Inconvenient Truth), and a hot political issue as well, surely people would get it by now.

But while science magazines are all talking about carbon sequestration and climate-forcing mechanisms, the average person is still trying to decipher the nature of the problem itself. True, few citizens need to understand the complicated nuances of atmospheric science or the various mechanisms of the Kyoto Protocol, but people cannot care about things they do not understand. If our leaders are to take the issue seriously, the public must have at least a basic understanding of it.

So, to clarify - the ozone layer is a part of the atmosphere way up high that helps shield the earth from the sun's most harmful rays. A couple of decades ago, scientists realized that some of the chemicals we were using in our industries and homes were finding their way into the upper atmosphere, reacting with the ozone and destroying it. Scientists were concerned that if this continued, it would thin the vital protective layer, leading to increased skin cancers and crop damage. They sounded the alarm bell, the international community responded with the Montreal Protocol to phase out ozone-depleting substances, and today the ozone layer is gradually healing itself.

Global warming is a quite different phenomenon. Again, it's a human-made problem, but this time it's due to the heat-trapping gases we are putting into the atmosphere from our industries, cars and homes. These gases act like a blanket, keeping more heat near the earth's surface. More heat also means more energy in the atmosphere, which means more frequent or severe extreme weather events like droughts, storms and floods.

With each new piece of research, the expected effects of global warming become clearer, more urgent and more disturbing. Scientists say this will be one of the biggest challenges humanity will face this century. Right now we are not tackling the issue fast enough or direct enough to escape the most severe consequence.

So if you understand what global warming is, and what it isn't, please tell your friends. Please speak up and help ensure that we don't continue to grope blindly into the future, searching in the darkness for a light switch. Because at this rate, by the time we finally reach it, it may no longer work. 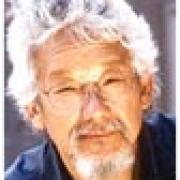 See all by David Suzuki