The territory's new energy policy became law earlier this year — and regulators are deciding what mix of renewables it has.

Puerto Rico’s electric system is at a crucial inflection point, with an opportunity to pivot from years of hardship — high energy costs, utility bankruptcy, the largest blackout in U.S. history and heavy pollution from a system 98 percent powered by fossil fuels — to a new vision that is clean, reliable and resilient.

In March, Puerto Rico’s new comprehensive energy policy (Act 17) became law, putting forth a vision for a more resilient and distributed system, as well as requiring 100 percent of electric power to come from renewable sources by 2050 and 40 percent by 2025, up from 2 percent today.

Now the details of how that vision could be met are coming into focus, with the utility’s proposed 20-year integrated resource plan (IRP) under review by Puerto Rico’s energy regulator. This review could wrap up as early as February, with key hearings scheduled for early January. At that point, the regulator can direct the Puerto Rico Electric Power Authority (PREPA) to follow a certain planning scenario or extend the process and ask for more analysis.

The proposed IRP evaluates a wide range of scenarios involving different power plant options and grid configurations, all of which envision significant transformation of today’s system and retiring most of the antiquated power plants burning oil, as well as the island’s coal power plant. Among all the options presented, one primary question comes through — how much should Puerto Rico’s energy system rely on imported natural gas in the coming decades, and how much on renewable energy to align with the vision in Act 17?

A choice between gas-heavy or solar-focused futures

These are in addition to the existing gas infrastructure in the south (Ecoelectrica) and a new facility under construction in San Juan. PREPA suggests a second scenario (S4S2) that is also attractive — this plan leaves out gas at Mayagüez and Yabucoa, relying on slightly more solar energy. A third scenario (S3S2S8) offers a heavy focus on solar investments and minimizes new gas investments. 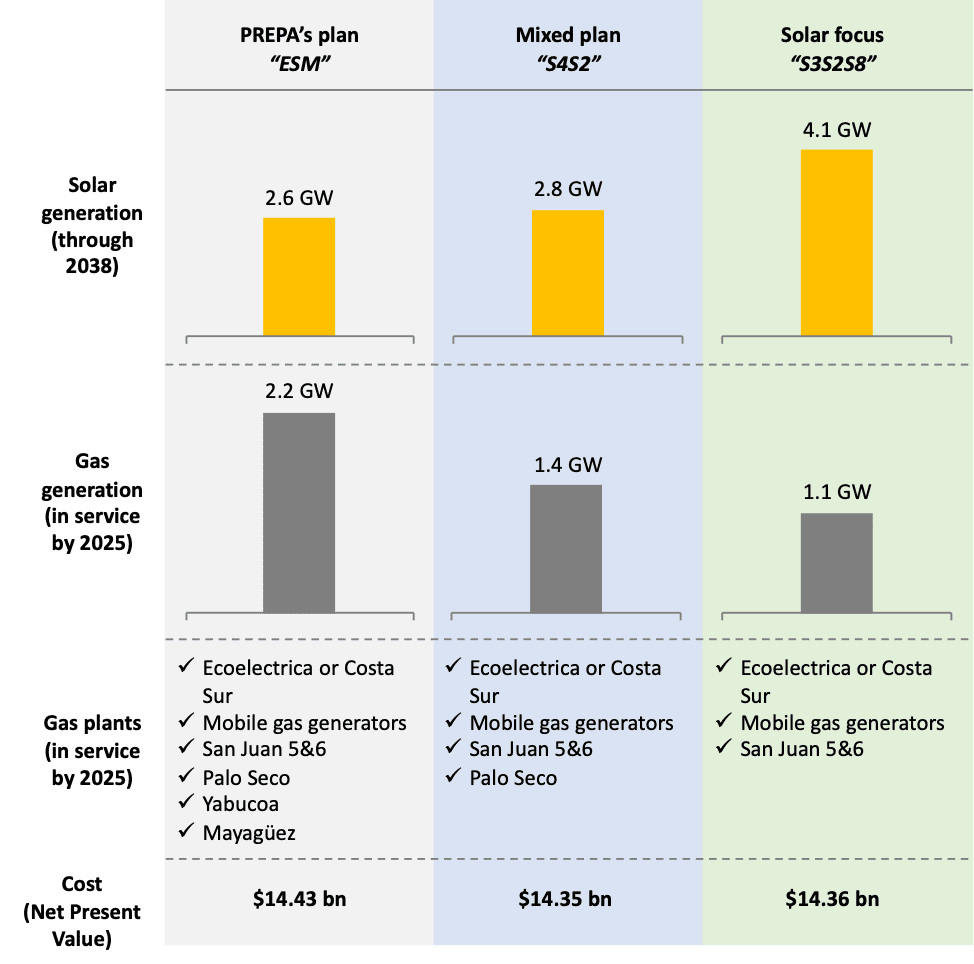 PREPA has made clear that it prefers the first plan. The utility’s fiscal plan, submitted to the federal Financial Oversight and Management Board, portrays PREPA’s "future state vision" for power generation which exactly reflects this plan.

PREPA has proposed to its regulator that the Yabucoa and Mayagüez projects be considered only as hedges against future uncertainty in new clean options, but in other forums — from the fiscal plan to public statements at energy conferences — PREPA has indicated the full set of gas investments, including Yabucoa and Mayagüez, are central to its plans. Meanwhile, PREPA largely discards the solar-focused plan in its IRP analysis. 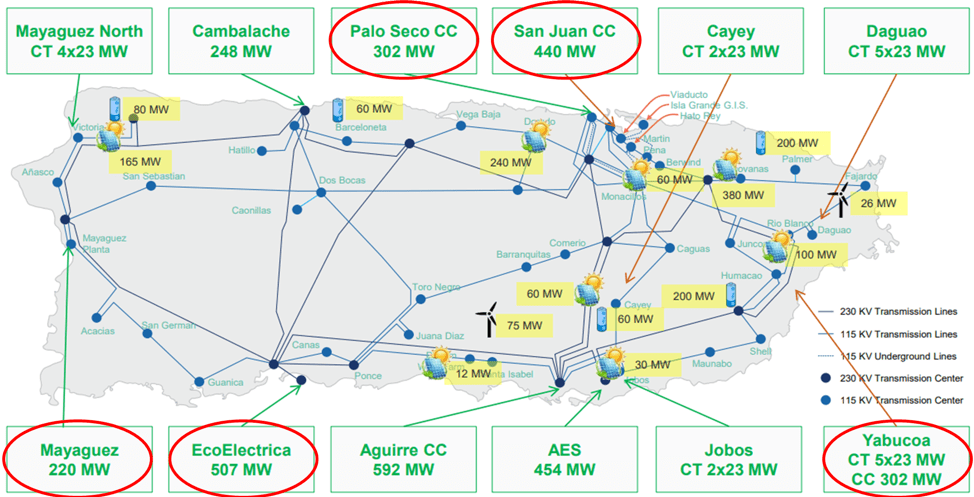 Many proposed gas investments are not needed

PREPA depends on gas facilities in the north and south of Puerto Rico. In the south, near Peñuelas, the Ecoelectrica and Costa Sur power plants already burn gas, imported at a nearby LNG terminal, also run by Ecoelectrica. In the north, the San Juan power plant units 5 and 6 are being converted to run on gas, which will be supplied through new LNG import infrastructure being constructed by NFEnergía. All three plans described above include completing the San Juan project, consolidating the two power plants in the south to one and establishing a series of smaller mobile gas generators around the island.

PREPA proposes the Yabucoa and Mayagüez gas facilities based on a "preferred plan" that appears to be added to the analysis by PREPA. No other scenarios — which used analytical optimization to select power plant investments — include these facilities, meaning that the IRP analysis never showed it was economically valuable to build these power plants and LNG terminals.

PREPA depends on gas facilities in the north and south of Puerto Rico.

This plan is more expensive than alternatives with more renewables. PREPA suggests the Yabucoa and Mayagüez facilities can be useful as a hedge against uncertainty, but its own analysis shows that if energy demand is higher or lower than expected, developing those facilities will cost Puerto Ricans more than other options and won’t comply with renewable energy targets prescribed by law.

PREPA is also pursuing a new gas power plant and import terminal near San Juan at the Palo Seco site. These investments would be in addition to the San Juan 5&6 project under construction. Even though this project remains subject to regulatory review, PREPA has collaborated with other government agencies to initiate a procurement process for a contractor to build it.

In fact, the IRP also does not make a compelling case for the Palo Seco facility. When comparing S4S2, which includes natural gas, to S3S2S8 (the high renewable option), PREPA’s own analysis shows their aggregate costs are comparable, even without considering the benefits from lower pollution, better participation and a more flexible system. This high renewable scenario relies heavily on solar and battery storage, with a modest amount of wind and hydro, supplemented by more limited gas generation. The costs of the scenario largely stem from the new solar and battery element.

PREPA’s base cost projection presumes a future in which solar costs are rising in Puerto Rico. This contrasts sharply to decades of solar cost reduction and recent projects in the rest of the world, where competitive solar prices in Mexico, Chile, Jordan, Jamaica, and solar and storage prices in Colorado and California are all coming in less than a third of the cost PREPA projects.

If Puerto Rico secures lower-cost renewables, the high renewable energy option also will be far more cost effective for Puerto Rican families and businesses. If the expensive Palo Seco plant is forced through instead, the opportunity for that clean pathway will be greatly limited, and the investment in the gas plant could crowd out other options for decades to come.

A choice for the next 20 years

The Puerto Rico Energy Bureau (PREB) has the opportunity to act decisively to drive a massive transformation in Puerto Rico’s energy system, with the opportunity to shape the island’s energy system for the next 20 years. Options in the IRP include a solar-focused plan for generation that is well-aligned with new policy focused on renewable energy at comparable cost to alternatives that depend on fossil fuels.

Puerto Ricans need a plan that works and doesn’t have a bias toward costly projects that could end up weighing down the power sector for decades.

Additionally, most of PREPA’s proposed gas investments are unnecessary. This includes new LNG import terminals near Mayagüez, Yabucoa and San Juan, and major power plants in the same locations. In particular, the proposed gas plant at Palo Seco is not needed for a reliable, affordable energy system. Continued procurement activity for this plant is troubling, and the energy regulator can send a clear message that this plant is not approved and utility and government agencies should stop wasting their resources preparing it.

More than two years have passed since Hurricane Maria, and people are still waiting to see the grand visions of a transformed energy system materialize. Certainly elements of the IRP require new guidance from the regulator (for instance, the role of distributed energy resources vs. large-scale plants), but it provides enough clarity around an attractive plan that PREB can move forward without delay in directing PREPA to start implementing this massive transformation.

Time is short. The pressing need for improving the system means that Puerto Ricans need a plan that works and doesn’t have a bias toward costly projects that could end up weighing down the power sector for decades. PREPA’s own analysis though shows a pathway forward to that high renewable option, and the people of Puerto Rico deserve the best options on a pathway to an increasingly clean future as required by Act 17. The regulatory body can help guide the way toward seizing them.