Q1 2019: Utilities want in on growing demand for renewables

Deals show that the strong appetite for renewables among corporate energy buyers may be inspiring the creation of more options for corporates.

After a significant uptick in corporate renewable energy deals in 2018, the pace of new transactions slowed during the first quarter of 2019. The total capacity of corporate contracts disclosed in the first three months of the year amounted to about 756 gigawatts, about a third of the amount that were announced in Q4 of 2018 based on research by GreenBiz with support from the Renewable Energy Buyers Alliance.

Although the rate of corporate renewables procurements cooled during the quarter, the announced deals show that the strong appetite for renewables among corporate energy buyers may be inspiring the creation of more options for corporates beyond the power purchase agreements (PPAs) that have made headlines over the past several years. 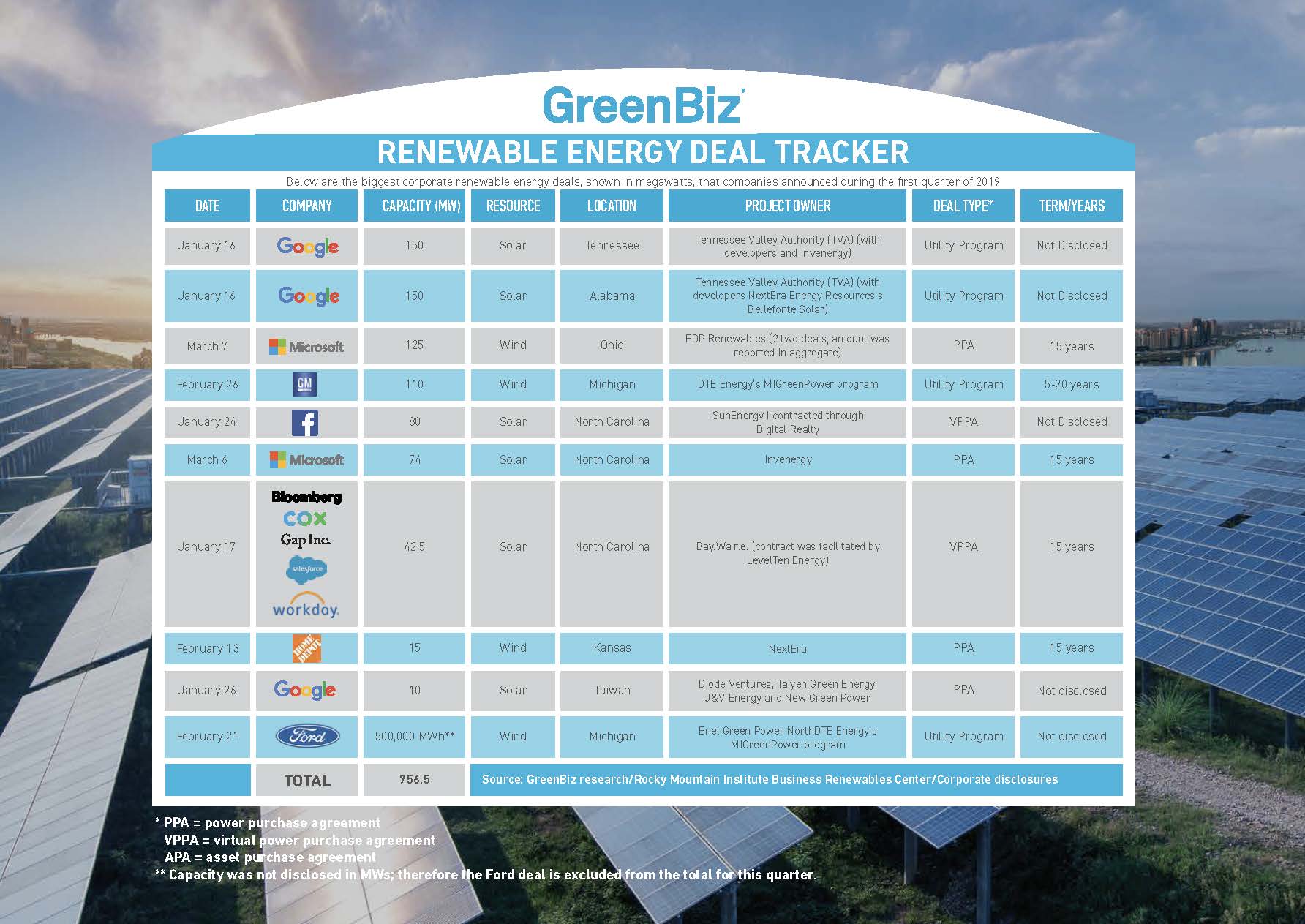 The first three months of 2019 brought a substantial increase in utilities supporting corporate clean energy buyers. In contrast, 2018 was marked by the explosion of PPAs and innovative financing structures signed by corporate customers. It seems utilities have taken note of the corporate demand, and want to be a bigger part of the action.

The largest deals of the quarter came from Google, which inked two 150-megawatt solar deals with Tennessee Valley Authority (TVA) to power the tech giant’s new servers in Tennessee and Alabama; these will be the largest solar farms to be built for Google. In an interview with Knox News, TVA spokesman Scott Fiedler acknowledged that the utility’s investments in clean energy helped attract corporate offtakers.

"This announcement demonstrates that the investments we’ve made to deliver cleaner, low-cost electricity directly support our record-setting economic development activities," Fiedler said. "We know that companies like Google recognize the tremendous value of public power, and our renewable energy efforts ensure we can attract and retain top-tier companies to better the lives of our nearly 10 million residents."

It seems utilities have taken note of the corporate demand, and want to be a bigger part of the action.

The Google/TVA announcement comes three months after TVA inked a deal to build what will be Alabama’s largest solar farm — 227 MW — as part of a utility deal with Facebook to power the social media giant’s new data center in Huntsville. The Facebook project alone will almost double Alabama’s installed solar capacity of 252 MW, according to data from the Solar Energy Industries Association (PDF).

Green tariffs — programs offered by utilities that allow commercial and industrial customers to buy bundled renewable electricity from a specific project at a set rate — carried some impressive deals in Q1. While the concept isn’t new, green tariffs have been growing in popularity and as an option for some companies to meet their renewable targets.

General Motors, a vocal proponent of green tariffs, signed an agreement with DTE Energy’s MIGreenPower program in March. GM bought 300,000 megawatt-hours (110 MW) of wind-generated electricity in the deal, which company representatives say is equal to 100 percent of GM’s electricity needs for the company’s global technical center in Michigan. This comes a year after GM and Switch, a data center and digital infrastructure company, became the first participants of a green tariff program through Consumers Energy, a subsidiary of CMS Energy.

Ford Motor Company signed a similar deal with DTE, procuring 500,000 MWh of wind to power its Michigan Assembly Plant and Dearborn Truck Plant with 100 percent renewable energy. This capacity is not included in the chart’s cumulative total, as the capacity was not provided in megawatts.

Elsewhere, 3M entered an agreement with Xcel Energy, leveraging the utility’s Windsource and Renewable Connect program to cover 100 percent of the electricity usage for its global headquarters in St. Paul, Minnesota. Through this program, which Xcel launched in 2007, 3M is able to procure wind energy via Xcel Energy’s wind farms.

This deal, which is not included on the tracker graphic as it does not specify capacity, is projected to be about 80,000 MWhs per year. The headquarters began to use this program March 1, just days after the company announced the commitment. This fast turnaround shows how utility programs can help corporates ramp up clean energy use quickly, whereas traditional procurement contracts can take years to build the renewable resource and bring it online.

One deal this quarter illustrates new models to help meet more corporate use cases. Five companies — Bloomberg, Cox Enterprises, Gap Inc., Salesforce and Workday — worked with LevelTen Energy to aggregate similar, relatively small amounts of renewable energy demand to collaboratively create a solar project in North Carolina. The companies collectively acted as the offtakers for the renewable energy project in the first deal of its kind.

Many companies — large and small — have renewable energy demands that may not necessitate an agreement for a unique renewable procurement deal. Local businesses and regional operations may desire smaller, regional capacity to support operations.

Instead, local businesses and regional operations may desire smaller, regional capacity to support operations, requiring more distributed agreements. While companies such as LevelTen may make this possible now, this aggregation deal may be illustrative of the type of products utilities and energy providers may offer in the future for renewable energy buyers.

The Renewable Energy Buyers Alliance (REBA), originally founded by four NGOs in 2014, officially spun out into its own nonprofit organization in March. Major corporations and renewable energy buyers, including Google, Apple and Walmart, joined the alliance, which touts itself as a trade association for buyers.

The organization hopes to make the process of procuring renewable energy simpler for organizations large and small by communicating the collective and wide-spread demand from corporates. REBA, which has a history of supporting renewable procurement deals, hopes utilities and others will provide more "off the shelf" options in the future, which would streamline the process for corporates and obviate the need for bespoke procurement solutions, such as green tariffs.

If the trend of utility options continues to grow, and if REBA achieves its goals, it is possible that renewable procurement deals will become fewer and farther between as market-ready solutions meet corporates’ renewable appetite. That is, if REBA is successful, it would put itself out of business. Watch this space.