The record second quarter of 2019 saw deals inked to add over 2.8 gigawatts of capacity and 490-gigawatt hours (GWh) annually to corporate energy portfolios.

The second quarter of 2019 was one for the record books for corporate renewable procurements, as deals inked added more than 2.8 gigawatts (GW) of capacity and 490 gigawatt-hours (GWh) annually to corporate energy portfolios.

The capacity contracted during Q2 was about a 60 percent increase from the second highest quarter on record, Q4 2018, during which companies added 1.75 GW through power purchase agreements and utility programs. On top of that amount, several deals disclosed during the second quarter were reported in megawatt hours (MWh), meaning the increase is more significant, although the two figures can’t be combined without additional information. 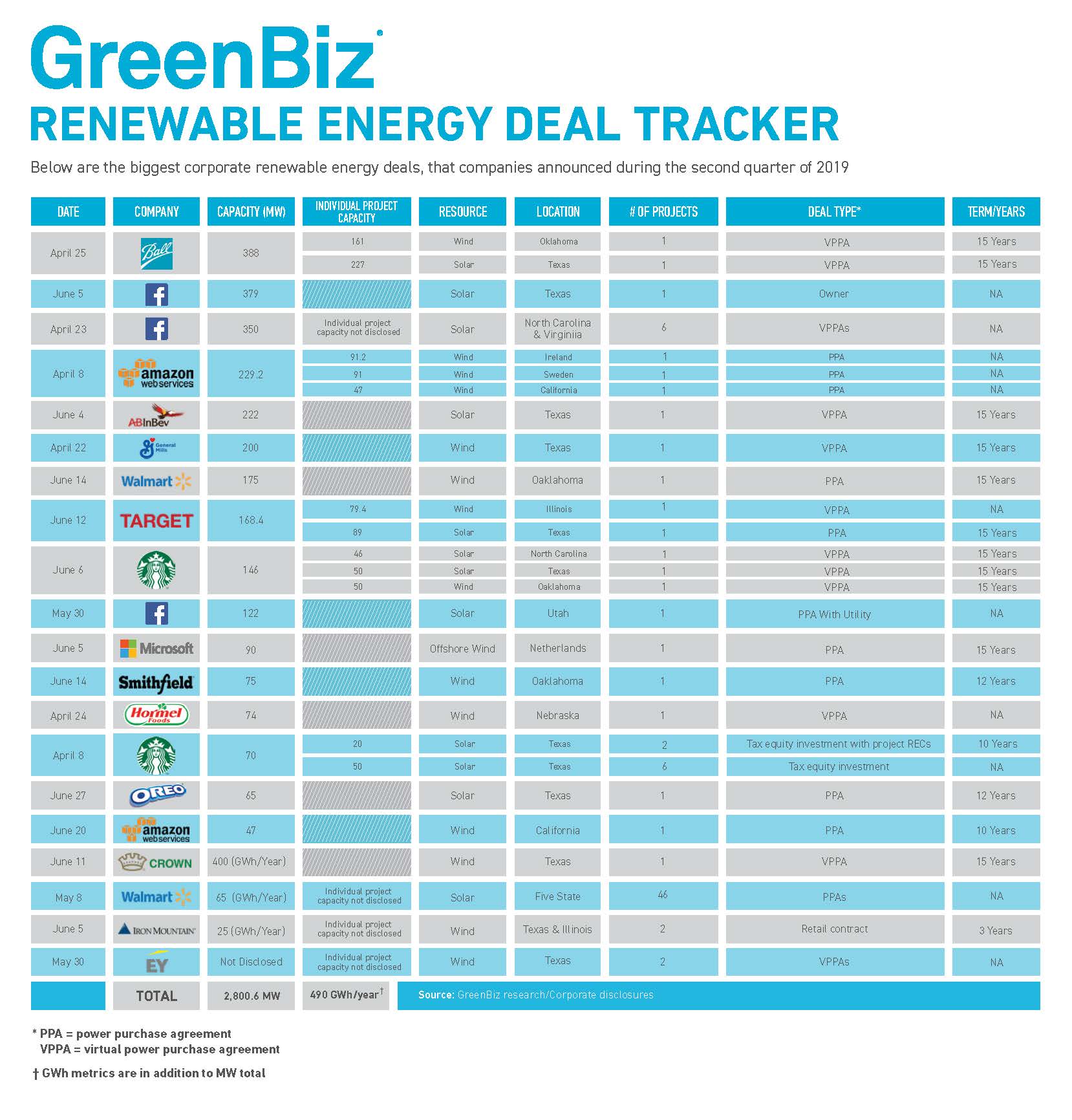 The banner quarter featured some familiar names — including Facebook, Walmart and Amazon, all of which have commitments to power their operations with 100 percent clean energy — along with new players, such as Hormel Foods, Mondelēz International's Oreo division and Ball Corporation.

Taken as a whole, three trends pop out.

This is in contrast to transactions disclosed in past quarters, which were mainly represented by single contracts for single projects (although 2018 Q4 foreshadowed this trend with both Walmart and ExxonMobil signing aggregation deals for two projects).

Notable multiple project deals in Q2 included one orchestrated by Starbucks, which signed three virtual power purchase agreements (VPPAs) in three states that include wind and solar resources; one announced by Ball, which signed two VPPAs (one wind and one solar) in two states; and one disclosed by Amazon, which inked a deal for three wind power-purchase agreements (PPAs) across two countries.

This aggregated deal structure reflects the growing options for corporate clean energy procurements that bring value and minimize risk for the off-taker. Aggregating multiple projects diversifies the energy portfolio by location and resource, much like how a mutual fund reduces risk in an investment.

"Inherently, diversity of technology, location and developer should all result in a better balance of risks than picking a single project," said Patrick Leonard, energy manager for Starbucks stores in the United States and Canada, in an email.

Other corporates used this structure to acquire energy from many small contracts. In a separate deal, Starbucks acquired capacity from seven solar projects in Texas at once, and Walmart announced it executed 46 rooftop solar PPAs across five states. The Walmart rooftop deals, which are behind the meter making them different from other transactions on the leaderboard, are notable as Walmart strives to take bigger steps to time and location-match clean energy use.

The diversity of projects means that clean energy resources may be located closer to the point of use. Walmart and Starbucks, both of which have thousands of locations, have the potential to better time and location match with their renewable power resource, while relieving congestion on the grid.

"Buying renewable energy from multiple projects across the U.S. reflects how we use electricity across our store portfolio," Leonard said.

The emergence of this business model is just one example of how the market is providing more options to fit more use cases as companies step up clean energy commitments.

2. The timing is right

The uptick in the number of deals and size of deals reflects market forces that may be spurring on renewable procurements.

For many companies, renewable procurements just pencil. The cost of the technology continues to decrease, with the cost of large-scale solar and wind cheaper than dirtier options on a levelized cost basis, even without subsidies.

Additionally, the uncertain future of federal tax breaks may be spurring on companies to enter PPAs now instead of later. The solar investment tax credit and the wind production tax credit, the major pieces of federal policies that are designed to encourage investment in clean energy, begin to phase down at the end of the year. Once the tax credits expire, financing of new projects may be more expensive.

This confluence of forces is one reason why AB InBev, Anheuser-Busch’s U.S. arm, entered its first VPPA, a 222-megawatt (MW) solar plant in Texas. The massive plant, expected to be operational by 2021, will be the size of 1,500 football fields, the company said in a statement.

"Timing is good with the investment tax credit and the production tax credit that may not be there into the future," Angie Slaughter, vice president of sustainability at AB InBev, said in a phone interview with GreenBiz.

Timing is good with the investment tax credit and the production tax credit that may not be there into the future.

Finally, as the public becomes more aware of the imperative to reduce emissions, companies are recognizing the reputational advantages of striving for clean energy goals.

AB InBev, for example, has put an emblem on every Budweiser bottle and can, noting that it is brewed with renewable energy.

"Now it’s in the hand of every one of our Budweiser consumers on a daily basis," Slaughter said. "I do believe our consumers are very curious about specific things that are used to produce the product they buy every day. They want to be informed, they want to know more about the products they buy, they want a value proposition and to feel good and understand that what they’re buying is a positive product."

After corporate and tech trailblazers have tested the water, food brands new to our roundup are making impressive showings.

Ball topped this quarter’s list with a deal reaching 388 MW, enough to cover all of its North American electricity load. While not a completely new player — Ball entered a 4.5 MW wind PPA in 2016 — the new deal vaults Ball into one of the leaders in renewable procurements, as the deal is one of the largest recorded by GreenBiz.

Smithfield Foods entered a 75 MW PPA that would cover 15 percent of the company’s energy use in the United States. The company has explored smaller clean energy options prior to this deal, including using on-site wind generation and capturing biomethane from pig manure, all in its quest to reduce emissions by 25 percent.

Oreo’s parent company, Mondelēz International, signed its first U.S.-based renewable deal to procure 65 MW from a solar project in Texas. The energy, Mondelēz says, is enough to power the production of half of the Oreos consumed in the U.S. — about 10 billion cookies.

Hormel, owner of Skippy, Applegate and Wholly Guacamole, says it is on track to procure 50 percent of its energy from renewables following a 74 MW VPPA, in addition to other initiatives, including subscribing to community solar gardens.