Q3 2019: This corporate renewable thing is kind of a big deal

In quarters past, GreenBiz aimed to create a comprehensive record of every major corporate renewable procurement deal disclosed within the past three months. It was doable. There weren’t very many, the deal types were straightforward and the megawatts of capacity were modest.

Now the market has matured. With hundreds of companies committed to reaching 100 percent renewable energy and many more aiming for some sort of renewable target, there are more buyers than ever. And with them comes more deal structures to fit more use cases. (I went into more depth about these trends in the second quarter 2019 tracker.)

Corporate renewable procurements are now so common, it is no longer practical for the casual follower to capture a complete list of contracts. So this quarter, we’re evolving the Clean Energy Deal Tracker to focus on the 10 largest deals we’ve observed for July, August and September. 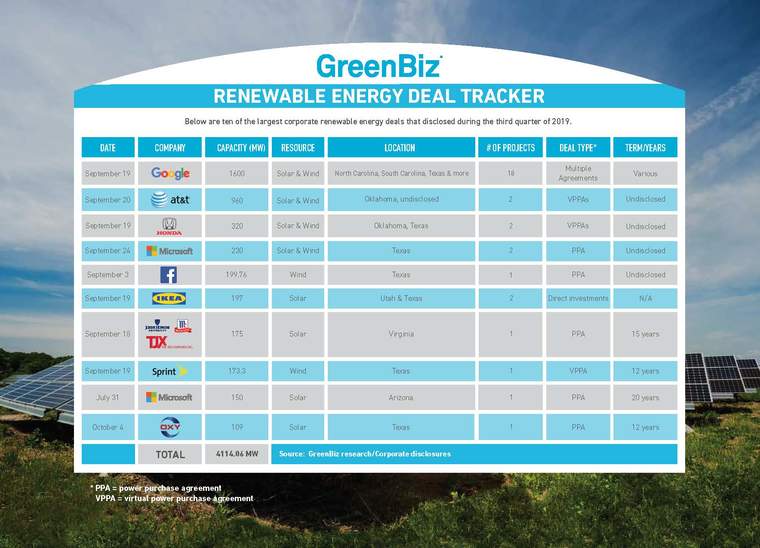 Here are some trends we noticed as we looked through the numbers.

Big deals are getting bigger

This quarter, two deals — Google’s mammoth 1.6-gigawatt (GW) deal and AT&T’s 960-MW transaction — were both multifold larger than anything we’ve seen in the past. In fact, the top 10 deals of Q3 all were above 100 MW — an uptick from quarter’s past. Calculating the average of the top 10 deals from each quarter of GreenBiz’s quarterly tracker reflects a trend towards increased deal size, as shown in the chart below. 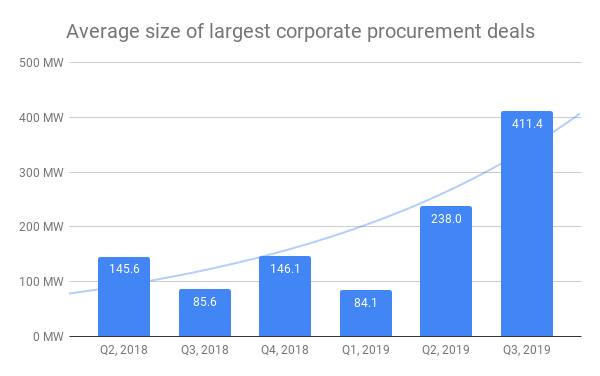 Before this quarter, the biggest single deal we had identified was Ball’s acquisition of 388 MW of capacity in the second quarter of 2019.

Shannon Carroll, director of global environmental sustainability at AT&T, said the reason the company was able to make such a large step up in capacity was because of two main factors: more offerings that met the company's criteria of a renewable project and the experience the team gained from earlier deals.

"As the market for [virtual power purchase agreements] has matured, so have the opportunities," Carrol said. "As we examined the current VPPA market, we were looking for deals that reflected our geographical footprint, the size and scale to match our needs, strong financials, and the right developer. Building on the invaluable experience of executing our initial deals in 2018, combined with multiple offerings that met all of our criteria, we were able to make a big leap forward in 2019. ... If any of these factors had been missing from the offerings, we likely would not have been able to do as many of these large-scale deals as we have."

Most renewable procurement announcements during Q3 coincided with Climate Week NYC, with seven of the 10 major deals all announced within days of one another.

Together, the collective capacity of deals announced that week — 3.7 GW — was significantly more than that of the second quarter of 2019, the largest quarter for renewable procurements at that point, according to the Clean Energy Deal Tracker.

The collective capacity of deals announced that week — 3.7 GW — was significantly more than that of the second quarter of 2019, the largest quarter for renewable procurements at that point.

The slew of announcements reflects how companies want to be associated with acting on climate. Other companies took the opportunity to sign onto other corporate leadership initiatives, such as joining the We Mean Business coalition or committing to deeper clean energy goals. Amazon issued The Climate Pledge, outlining a commitment to reach the goals of the Paris Agreement a decade early, under pressure from employees.

The intersection of climate commitments with the rising public interest in climate action shows how consumer-facing companies see clean energy as a reputational advantage.

Company commitments are expected to continue to drive the shift to a clean electric grid. Today, renewables only represent 5 percent of the energy used by Fortune 1000 companies. Research from Wood Mackenzie says that there is a "peer pressure" effect, where major companies are creating an atmosphere of "increased market participation" in renewables. As companies play catch-up with the big players, we may see a surge in renewable energy demand — to the tune of 85 GW by 2030, according to WoodMac.

An increase in mid- and small-company deals

Not included in this deal list chart is the increase in the number and diversity of buyers. This reflects the new types of corporate renewable procurement options and deal structures that meet more use cases. This quarter foreshadowed what some of these models might look like in the future. Notable mentions include:

The growth in the number and type of buyers also have made room for more service providers to help companies enter into deals that fit them. Examples include LevelTen, Schneider Electric, Customer First Renewables , 3Degrees and HST.

Watch this space to see what new structures emerge.