The corporate renewable procurements disclosed in the fourth quarter of 2019 were remarkable for being unremarkable.

The corporate renewable procurements disclosed in the fourth quarter of 2019 were remarkable for being unremarkable.

After two blockbuster quarters of contracts for solar, wind and other renewables — more than 2.8 gigawatts in Q2 and 4.1 GW in Q3 — the largest 12 corporate deals from U.S. companies between October and December pegged a respectable 819.6 megawatts in additional capacity.

The top deals showcased the new contract models that have grown in popularity in the last few years, notably agreements that aggregate the buying needs of several companies.

The replication of these contract models show they’re no longer novel; they’re how companies are procuring clean energy. 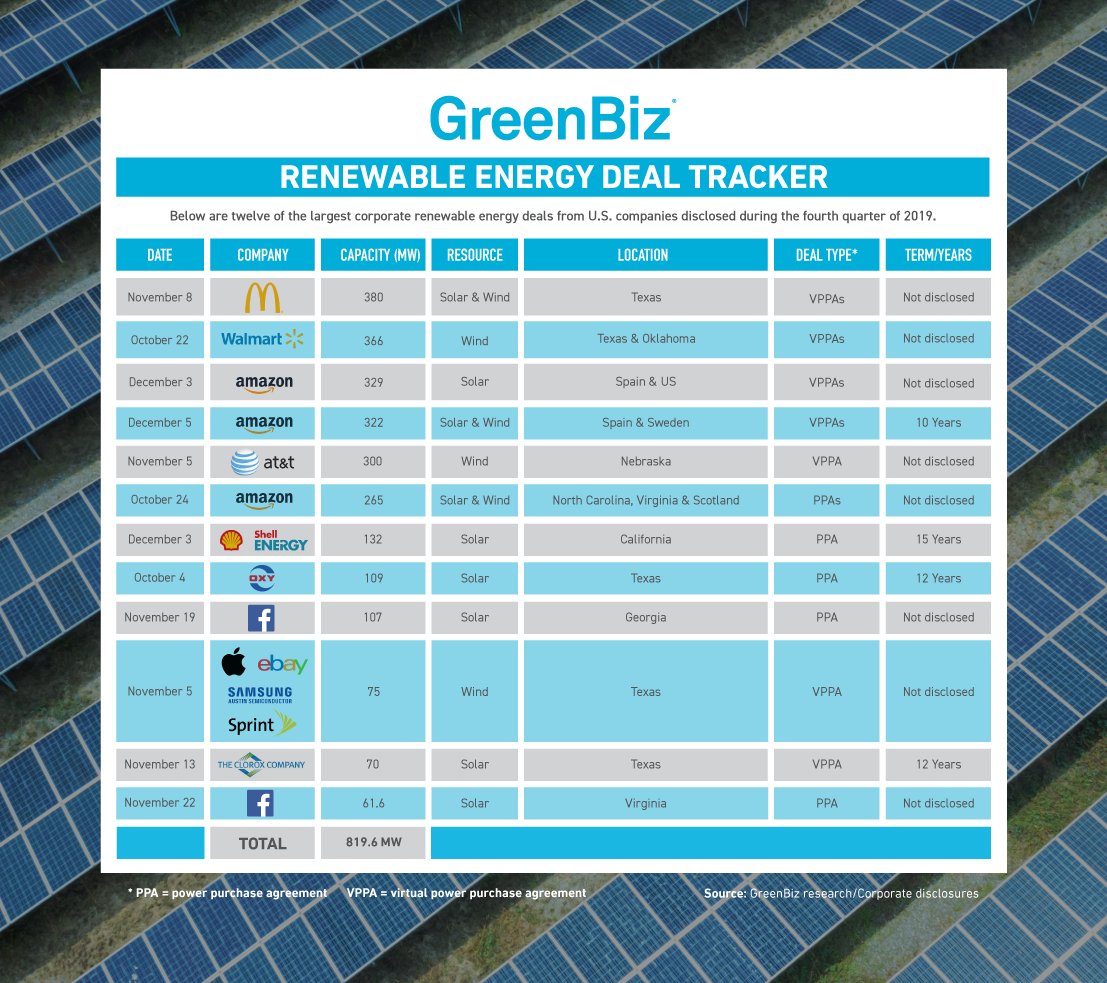 1. Amazon is addressing climate, thank you very much

Three of the top clean energy deals in the fourth quarter were inked by online retail and logistics giant Amazon. Together, the three power purchase agreements (PPAs) represent 916 MW of capacity.

Two deals were announced during the same week: 322 MW from solar projects in Spain and wind farms in Sweden; and 329 MW from solar developments in Spain, Illinois and Virginia.

The company says that the procurements will supply energy to Amazon Web Services data centers and help put it on track for its net-zero carbon by 2040 goal.

Amazon’s power purchase agreement (PPA) spree — all three of which included at least one deal in Europe — show the "arms race" among tech giants to buy renewable power. The confluence of the falling cost of renewables with the increased demand to step up climate ambitions are putting the squeeze on companies including Amazon, Google and Microsoft that are coming under increased pressure to act on climate.

Ironically, Amazon is also cracking down on an employee group that demanded the company step up on climate action in the first place, saying the group’s public comments on this issue are in violation of the company’s communication policy. This comes after Amazon announced its Climate Pledge in September, which appeared to be in response to the employee activism.

The move looks to try to muzzle employees from publicly pushing the tech giant to do more beyond renewable procurement, such as ending contracts with oil and gas companies and addressing its transportation-related emissions.

As was already mentioned, Amazon inked deals in Spain and Sweden. Elsewhere, Ford signed onto a biomass deal in the United Kingdom (which is not included in the graph due to its relatively small size).

The deals track with the rising trend of PPAs in Europe. Activity has increased tenfold since 2013 (which sounds impressive, but reflects that there were only four in 2013 and 45 as of last year). European companies — not included in this analysis — are inking deals in Norway, Sweden, Spain, Italy, Germany and Portugal.

The rise of European corporate renewables transactions likely reflects policy indicators such as the European Green Deal, which sets a net-zero emissions target for the European Union by 2050, and the New Renewable Energy Directive, which sets targets for corporate renewable procurements in Europe. Additionally, the "Greta Thunberg Effect" is putting new public and internal pressure on the private sector.

Corporations with a carbon footprint in Europe are facing pressure to reduce their emissions there, and now that key administrative hurdles are coming down, they have the ability to act.

Additionally, Europe has been making an effort to standardize contracts across jurisdictions, noted Ben Serrurier, senior manager of origination at LevelTen Energy, in an email.

"Corporations with a carbon footprint in Europe are facing pressure to reduce their emissions there, and now that key administrative hurdles are coming down, they have the ability to act," Serrurier wrote.

Europe isn’t the only market making moves. India remains the second-largest corporate PPA market after the United States (despite policy changes that slowed growth), and China is expected to roll out policies that could lead to a surge in corporate procurements in the coming years, including its first renewable portfolio standard and the ability for companies to sell excess generation.

The end of the year brought more headlines from Europe, where several U.S.-based companies signed onto renewable energy deals.

Scotland’s wind sector is taking off and with it corporate procurements. One of Amazon’s procurements included 50 MW of wind on Scotland’s Kintyre Peninsula (its first in the country), and Tesco, the U.K.-based supermarket chain, entered a 60-MW procurement deal that included a Scottish wind farm.

These procurements aligned with Scotland’s milestone of hitting record-high electricity generation from wind power in the first half of 2019, creating enough electricity to power all of its homes twice over. Scotland is also home to the world’s first operating offshore wind farms, and advocates say further development of the sector could deliver billions to the economy.

Every two years in Scotland the government holds a lease auction for wind, which is paired with a contract for difference (CfD) mechanism. This clear local market signal enables supply chain investments, upgrades to infrastructure and allows for public and private entities to prepare the workforce.

Due to the Scottish government cutting subsidies, new projects have slowed. However, Scotland holds lease auctions for wind every two years, providing clear market signals that are expected to spur the market forward, according to Mary Collins, principal of MC Renewables Consulting.

"Scotland is ripe for continued offshore wind investment and is a market to watch," Collins said. “The prices were low in the last Scottish auction, which might spur some new offtake models."

While the corporate PPA market for offshore wind is nascent, there is some movement. Last quarter, a German chemical company signed a 100 MW offshore wind agreement (the largest to date) with Ørsted for a farm located in the North Sea.

Corporate demand for renewable energy has been driving grid-scale renewables for years. Last quarter, two pieces of news showed the rising tide of renewables is making a difference.

First, analysis from the Rhodium Group shows carbon emissions from U.S. power plants dropped by 10 percent in 2019 as renewables and natural gas displaced coal power generation. Unfortunately, the electricity sector was pretty much the only good news; every other sector’s emissions basically flatlined or rose in 2019. 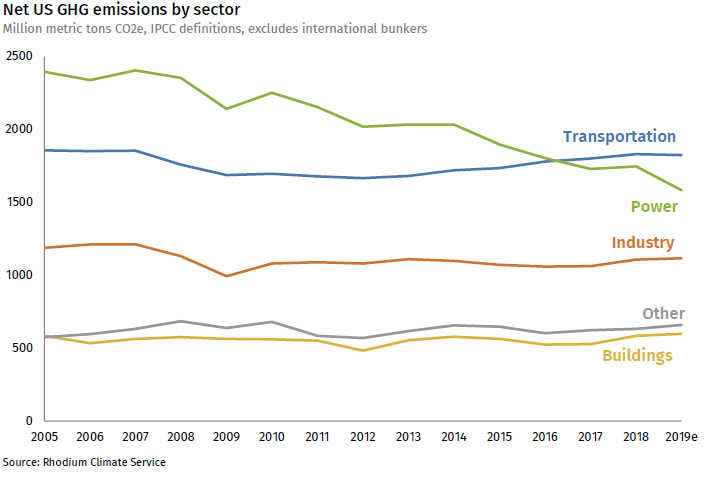 Corporations (that) put a focus on ensuring they’re adding new renewables to the grid with their procurement contracts deserve some credit in the acceleration of grid-scale adoption.

Corporations, many of which put a focus on ensuring they’re adding new renewables to the grid with their procurement contracts, deserve some credit in the acceleration of grid-scale adoption. And as the projects announced in the last two years come online and utilities and states strive to meet clean energy goals, the power sector likely will continue to be a bright spot in emissions reductions (although hopefully not the only one).

A second development worth repeating: renewables accounted for 100 percent of the capacity added to the grid in October, according to the Federal Energy Regulatory Commission (PDF). Data from the U.S. Energy Information Administration shows this trend will continue; more than three-quarters of electricity capacity coming online this year in the U.S. will be wind or solar.

While corporations have pushed blockbuster renewable deals, universities have begun dabbling in renewable energy. Academic institutions are spearheading new contract models that reduce risk and could pave the way for similar models for other campuses and municipalities.

Last quarter, 20 U.K. universities signed an aggregated PPA to procure energy from a Norwegian wind farm. The deal provides electricity at a fixed price to reduce the institutions’ exposure to price volatility.

In December, the University of Illinois announced a 12.1-MW PPA for an on-site solar facility. The university anticipates the solar farm will save it $5 million over the life of the project while bringing the campus closer to its clean energy goals.

Also in December, the University of Iowa signed a 50-year partnership agreement with Engie. While the deal doesn’t include specific clean energy projects at this time, the arrangement tasks Engie with determining the school’s strategy to reach its clean energy goals. The deal is similar to one inked two years ago between Engie and Ohio State University.