Rob Ruiz is single-handedly making the seafood we consume in the U.S. more sustainable.

The award-winning sushi chef spends his days and (late) nights running his new restaurant, The Land and Water Company, outside San Diego in Carlsbad, Calif. In his “free time” he works with the National Oceanic and Atmospheric Administration, World Wildlife Fund (WWF) and other leading international organizations to develop and promote initiatives — such as edible QR codes used to track where fish come from — aimed at making the seafood industry more reputable and sustainable.

Ensia recently caught up with Ruiz for an early morning conversation from his home base in Southern California.

Todd Reubold: When did you first realize you wanted to become a chef?

Rob Ruiz: I was born here in North County, San Diego. When I was 17 or 18 years old, I got accepted [to the University of Hawaii] and ended up choosing to go there. I wanted to get back in touch with the ocean and have a chance to unplug a little bit.

I was dead broke. I was a student. A friend of mine from school gave me a chance to wash dishes … at his bar. One thing led to another and I worked my way up from short order [cook] to fine dining and sauté to Hualalai Resort, which is a Four Seasons property on the Big Island of Hawaii.

My chef career came to fruition at the Hualalai. We raised our own fish. We raised our own shrimp. We had our own garden. All of these things came from the island. That’s how I was trained to be a chef. That was what was imprinted upon me early.

Reubold: How was your experience in Hawaiian restaurants different from what you experienced upon returning to the mainland?

Ruiz: When I was over there, we were routinely going to fishermen who were local. We were going to the ranchers on the island. You could go walk through their pasture. A friend of mine had a boutique garden on this huge coffee plantation. I brought up a chef’s book and looked at what he was growing: purple Romanesco, 20 varieties of chard and cherry tomatoes. All of these unique things flourished on the island in the volcanic soil. We pulled those veggies down and put them on a plate at the Hualalai. We had direct access to the land and the people who have dedicated their lives to each one of these trades.

When I arrived back in San Diego, the drastic difference I noticed is that here we are so highly regulated. From city zoning and permitting and the Health Department. There’s so much regulation. Not in the sense that everything is traceable, but in the sense that I can’t serve sport-caught fish at my restaurant. I have to find a fisherman that has the resale license. I have to get a buyer’s license in order to do this in a way that’s legal. Running a restaurant, in itself, takes a lot of dedication. To be able to go forage my own shellfish or any greens requires another licensing program. It takes years and years to be able to get to those points. 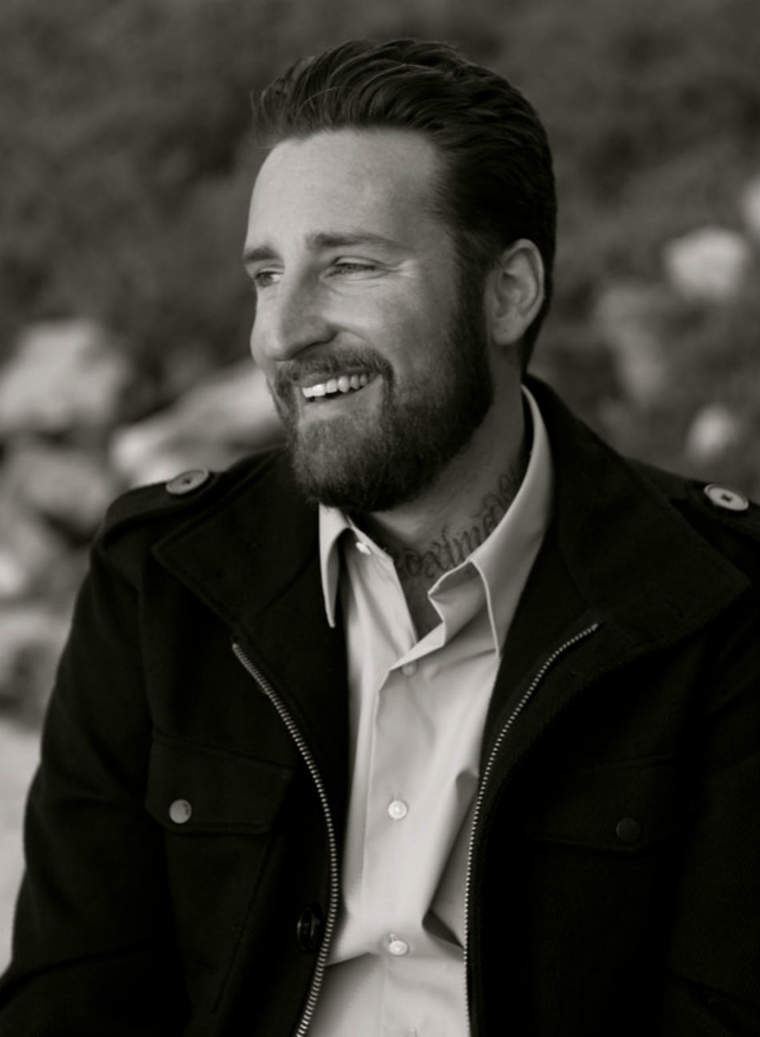 Reubold: What are the challenges of selling seafood that’s sustainably harvested?

Ruiz: The people and restaurants I worked with when I came back here would be serving trash to maximize margins of profit. Why pay $20 per pound when I can buy a similar fish for $3 per pound? This is fish fraud. Some of it is intentional. Some of it is not.

Reubold: Was that your inspiration behind the edible QR codes you developed for tracking a fish’s origin?

Ruiz: Absolutely. You start with wanting to do good for your local environment. Then you realize you can impact the city, the state and beyond. The sushi economy globally is billions of dollars. Our oceans are now in the most critical state they’ve ever been in. That’s the crux of why I’m doing what I’m doing.

Reubold: I read that you received pushback from some in the seafood business when you first launched the QR codes.

Ruiz: Nobody likes change. When sushi came to the States back in the late ’60s, early ’70s, fish and rice were cheap. Everybody started opening up sushi bars like people open pizza chains now. It was a fast way to make money, and no one knew what they were doing. Now, 30 years later, the situation is different. With the QR codes, I’m saying we need to provide accountability and traceability so we can harvest the ocean responsibly. Any time that you’re going to start messing with other people’s money, they get upset.

I’m just pulling the wool back and showing when you go into low-budget sushi bars, there are many issues. All the spicy tuna that these sushi bars are ordering is called Saku tuna. It’s basically tuna by-product. They chemically treat it and gas it with carbon dioxide to give it this artificial color. This Saku tuna is illegal in Japan. It’s by no means good for you.

Reubold: You recently opened The Land and Water Company. What’s the statement you’re trying to make with a sustainable seafood restaurant?

Ruiz: As a chef, you’re only as good as your last plate. The conscious consumer is important to us. There are customers who come in who have had chemotherapy, who have celiac disease, who have thousands of different ailments. They want to go somewhere where they know they’ll eat something that’s going to help their body to not just survive but revitalize itself.

Reubold: Your mission seems bigger than just the restaurant, though.

The vaquita to Mexico is like the panda to China. It’s their national, cute mascot. It also happens to be the most critically endangered marine mammal in the world. There are only about 78 of them left on the planet. When we start exterminating species on the planet, those are obviously red flags that the overall health of our environment is in trouble.

Reubold: What’s been done to protect the vaquita?

Ruiz: In the last few weeks the President of Mexico closed the Northern Gulf of California to gillnet fishing, which is the main way that they’ve been fishing down there for 50 years. Not only is this being closed to gillnet fishing, but also the Mexican Navy is out there sinking boats they find that are violating this new law.

And they’re patrolling the Northern Gulf with drones to protect this [porpoise]. What I’ve done with NOAA is connect their scientists with the fishermen down there to develop these new low-impact trawling nets. They have big wheels so they don’t hurt the bottom of the ocean. They also have escape hatches for turtles and the vaquita porpoise, yet they’re still able to catch shrimp and fish.

Reubold: Are there actions the U.S. government can or is taking to make seafood more sustainable?

Ruiz: The Obama administration recently released the IUU, Illegal Unreported and Unregulated, catch program. [The Presidential Task Force] created an action plan last year, and now they’re starting the first phase of this plan. The goal is to control all of the seafood that’s brought into the United States.

Ninety percent of the seafood consumed in the United States is imported. Of that, 1 percent or less is typically inspected by the FDA and other government officials as it’s filtering into our country. It’s a huge issue. I’ve worked with the Department of Commerce on QR codes and traceability nationally. In three to five years most of the seafood entering the U.S. will be traceable. When you asked about why I opened the restaurant, it’s to educate locally and speak globally about the impact that one person can make.

Reubold: I was intrigued by the Select of the Sea program you launched using bycatch in new and innovative ways in the kitchen. Is that still something you’re doing or was that a springboard for some of your more recent efforts?

Ruiz: It’s both. It’s something that we’re still doing, but it’s seasonal for us. We work with a 100-year-old fish purveyor called Santa Monica Seafood. They’re on board with the sustainability program. They have a group of fishermen that fish out in Morro Bay, just a couple hours north of here. The name of the boat we were getting halibut from is called the South Bay. It’s what they call a drag boat.

I knew from working with NOAA and having friends that own fisheries up in Alaska who have fished for salmon for 20 years, what an issue bycatch is. I knew that as a drag boat, for every fish the South Bay keeps, they’re throwing back 10. At my restaurant, we have a staff of six chefs that have butchered fish for 20 years. We have no problem with butchering large volumes of fish.

We just asked the captain of the boat to stop throwing away any fish that had a little bit of protein on it. Any of the bycatch that you get, please throw it in a box, charge us the price per pound on it and send it down to us. He gets paid for everything he was throwing away and we get to have a variety of species that most customers haven’t seen.

Reubold: Are others doing this?

Ruiz: There are a lot of guys out there doing similar things. There’s a program called Trash Fish that’s doing a series of dinners nationally. They’re showcasing lower food chain fish. I think that’s brilliant. Eating lower on the food chain is better for you and helps the ocean as well.

Reubold: What more needs to be done to sustainably manage seafood?

Ruiz: The simplest answer regarding what any individual can do is just vote with your mouth. If people would just take one second when they’re about to shop for something or order something and think, “Is this good for me? Is this good for my family?” And remember, the ocean and our environment are part of that family, too.

Let me give you an example. Shrimp is the No. 1 protein from the sea consumed in U.S. We catch 63 billion pounds of bycatch globally a year, according to Oceana. For every pound of shrimp that lands on a plate, seven pounds of bycatch have been caught and discarded back into the ocean. It’s baffling when you think about the volume.

Reubold: What gives you hope other restaurants will get on board with your vision?

Ruiz: I see more and more restaurants taking on the challenge of becoming fully sustainable. I have the keywords “sustainable sushi” set up as a Google alert and I get several alerts a week. At least two new restaurants open each month in the U.S. alone that are sustainable sushi bars. That’s a very good thing.

Can business policies untangle the fate of sea life?

Inside the Most Sustainable Sushi Restaurant in the U.S.