Elon Musk took the energy storage world by storm with his announcement of the much-anticipated Tesla Powerwall battery. The Powerwall is sleek, modular and oozes with the high level of design quality Tesla has become known for. More important, it’s cheap — much, much cheaper than anyone was expecting. The Powerwall is advertised at $350/kWh for its 10 kWh battery (the smaller 7 kWh battery costs $429/kWh), and the Powerpack (a utility-scale battery solution) is priced even lower at $250/kWh.

Industry analysts and organizations focused on the relationship between battery costs and adoption are still wrapping their heads around these cost announcements — RMI included. In the wake of this announcement, one specific question came to the forefront of our minds: How many more customers will be able to adopt energy storage systems in the near term due to the dramatically lower price point? Our "Economics of Load Defection" analysis forecasted cost-effective, grid-connected solar-plus-battery systems for millions of customers in the next decade. Yet our analysis used conservative battery price projections far less aggressive than what Tesla has brought to the market today. 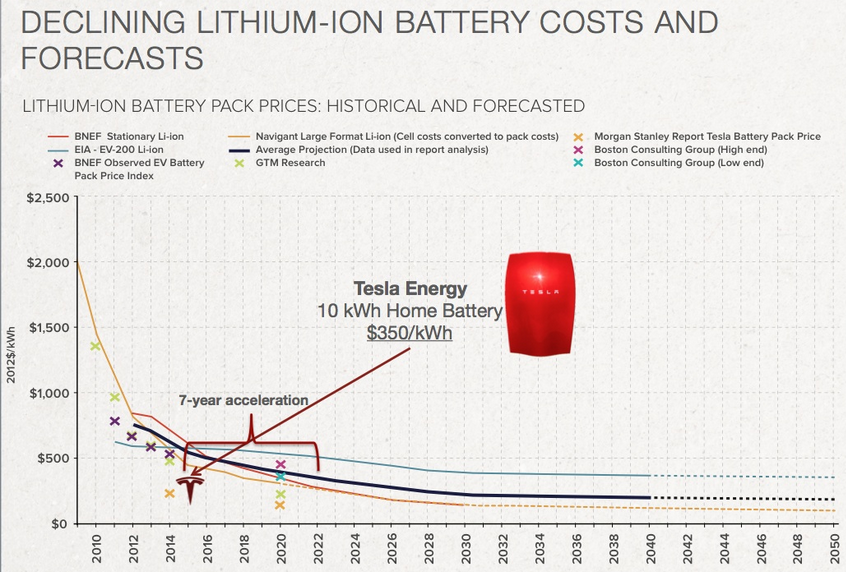 This means Tesla’s batteries are seven years ahead of the prices we modeled. (The $250/kWh utility price point didn’t appear in our models until 2028, although we didn’t specifically model a utility-sized solution.) A seven-year accelerated price reduction means tens of millions more customers will be able to cost-effectively install solar-plus-battery systems than we originally modeled in our analyses.

Granted, Tesla’s prices are aimed at installers, and there will be some markup before they reach the customer (SolarCity has stated systems will be installed for about $5,000 all-in). There also have been several articles discussing whether Tesla’s price truly incorporates all the bottom-line costs a customer might be charged, which certainly affect overall economics, but a broad theme is coming clear.

Costs are falling faster than projected. And with such a customer-friendly, aesthetic, well-designed solution that undercuts the cost of all current lithium-ion energy storage providers, competitors are feeling the pressure to revamp their own offerings.

And as with Tesla’s own announcement, further evidence of this can be seen from the electric vehicle battery front crossing over into the stationary storage market as well. For example, Daimler recently announced that it would sell Mercedes-Benz-branded lithium-ion residential and commercial batteries by the end of this month with deliveries in October.

A new study by Nature Climate Change analyzed over 80 cost estimates from electric vehicle manufacturers for their lithium-ion battery packs. It found that cost estimates declined 14 percent annually during 2007–2014. The study points out when production doubles, the cost reduction is an additional 6–9 percent, meaning costs continue to decline nearly as rapidly as solar.

Another compelling article points out that if this 8-percent rate continued through 2024, the cost of electric vehicle batteries could be cut in half to about $150/kWh. At that price, it would be very difficult for combustion-powered vehicles to compete with their electric counterparts on a cost basis — even in a world of $2–3 per gallon gasoline.

If we assume that Tesla’s battery won’t hit the market until 2016 and that it will do so at the price just announced, that has big implications for our original Load Defection analysis — especially in two of the more vulnerable regions we analyzed: the Northeast and Southwest.

The chart below illustrates the impact of Tesla’s announcement. The dark blue bars show how much annual value in energy sales we projected grid-connected solar-plus-battery systems could capture by 2016 in our original Load Defection report. The lighter blue bars illustrate the greater value that can be captured if we use Tesla’s new prices.

Furthermore, our original analysis indicated that this higher value would not be unlocked until 2022, whereas the value in the light blue bars below can be captured across the Northeast and Southwest by 2016 because of Tesla’s prices. 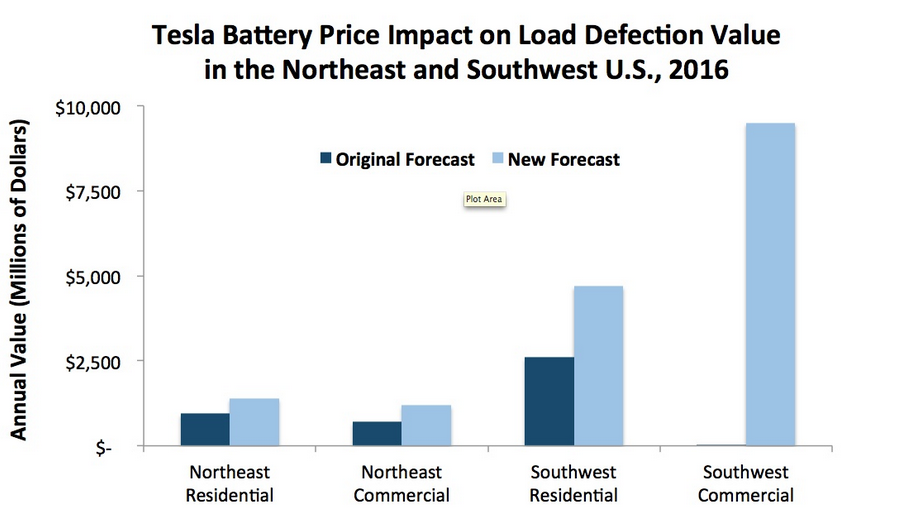 The Southwest commercial story is particularly interesting: Our original analysis did not indicate that solar-plus-battery systems would be cost effective in the Southwest for several decades. However, as illustrated above, the Tesla announcement enables cost-effective deployment of systems for commercial customers throughout the Southwest in the near term.

Bottom line: Thanks to Tesla’s announcement, in the Northeast and Southwest, an additional 60 million annual customer megawatt-hours cost-effectively can defect from the grid to solar-plus-battery systems more or less immediately, resulting in an additional $12.5 billion in annual utility revenue erosion.

Another factor to consider, which was not included in this comparison, is what might happen should solar prices drop faster than expected. Current prices and updated forecasts are coming in lower than what we modeled as well, meaning the economics could further accelerate.

In the wake of the Powerwall announcement and other signs that cheap storage is coming soon, if not already here, the market has responded in at least three big ways:

The Powerwall battery already has received 38,000 reservations, with some of those for multiple batteries. The Powerpack already received an additional 2,500 reservations, including from customers such as Target, Amazon, Southern California Edison and OnCor, with a typical installation size of 10 Powerpacks. This means Tesla is potentially sold out until mid-2016 with these non-vehicle batteries easily capable of taking up the $5 billion Gigafactory’s entire capacity.

Vermont utility Green Mountain Power is one of the first utilities already signed on to provide the Powerwall to its customers via on-bill financing and incentives. Green Mountain Power has announced that the systems will be used for resilience, sustainability, local power generation, peak demand reduction and to generate overall cost savings for its entire system.

Green Mountain Power’s interest in the Powerwall is of particular note because the utility actively will be investing in behind-the-meter assets to produce grid-level benefits — a utility business model that’s been talked about for decades by groups such as RMI but has yet to manifest at scale.

Additional utility interest in Tesla’s new product also has been signaled by Duke, which wants to use the batteries to participate in PJM’s wholesale electricity market as well as for a University of South Florida solar project.

With third-party offerings coming down the line that pair solar with Tesla’s Powerwall, the solar-plus-battery combinations forecasted in the Economics of Load Defection analysis are becoming reality. Nowhere is this more apparent than in Hawaii. Our initial analysis showed how both load and complete defection are cost-effective in Hawaii — today.

However, we’ve yet to see mass customer defection from Hawaiian utilities. One primary reason is the relative difficulty of finding providers capable of installing solar-plus-battery systems. However, with the Tesla announcement, this no longer may be the case.

Just look at what Tesla business partner SolarCity had to say on the topic:

In Hawaii, people are frustrated with utilities for having put a hold on rooftop solar in their territories. We hear often from people seeking a solar battery system that will allow them to sever ties from their utility completely. ... We don't think this is optimal for the grid.

The race has begun; let’s see who crosses the finish line

No one knows for certain what lower-priced batteries means for the grid. Readily available, cheap storage is certainly capable of changing the grid as we know it, but other factors including regulation, rate design and incentive structures such as net metering will play an important role in the importance and relevance of batteries moving forward.

What can be said with certainty is that the elusive, iPhone-like “coolness” factor that was missing from the storage space is finally here. 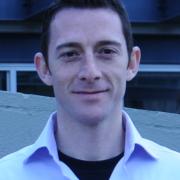 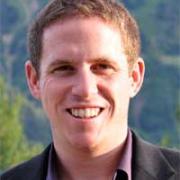 Batteries included: The 'grid of the future' takes shape

See all by Bodhi Rader