Fifty years ago this month, a marine biologist published a book about birds and pesticides, an unlikely pairing with an unlikely result. Rachel Carson’s book, Silent Spring, brought worldwide attention to the chemical industry’s impacts on nature and ecosystems. By all accounts, it launched the modern environmental movement — along with a half-century of controversy, and counting.

Silent Spring wasn’t Carson’s first book; years earlier, she had written two others, about oceans. As early as the 1940s, she became concerned about the impacts of pesticides, and in the 1950s focused on a U.S. government program to eradicate fire ants using aerial spraying of an organochlorine insecticide best known by its shorthand: DDT. The insecticide already had been used with great success during World War II to control malaria and typhus among civilians and troops.

That concern led her to write Silent Spring. The title, originally intended for a chapter in the book about birds, became a metaphor that suggested a bleak future for the natural world. It was serialized in The New Yorker starting in June 1962. In September, it was published as a book. It became a New York Times bestseller and facilitated the banning of DDT in the U.S. a decade later.

It also spurred heightened public concern about chemicals, bordering on, some would say, chemophobia.

Up to then, chemicals were seen as progress. Dupont captured the zeitgeist best with its 1930s advertising slogan “Better Things for Better Living ... Through Chemistry.” During World War II, chemical companies produced a cornucopia of innovations, including from neoprene to nylon, used in the military effort and, afterwards, in consumer products. Some of this was showcased at Dupont’s “Wonderful World of Chemistry” exhibit at the 1964 World’s Fair in New York.

Carson’s book brought much of that goodwill to a screeching halt. She railed against what she saw as indiscriminate and profligate use of pesticides. She wrote:

These sprays, dusts, and aerosols are now applied almost universally to farms, gardens, forests, and homes—non-selective chemicals that have the power to kill every insect, the "good" and the "bad," to still the song of birds and the leaping of fish in the streams, to coat the leaves with a deadly film, and to linger on in the soil—all this though the intended target may be only a few weeds or insects. Can anyone believe it is possible to lay down such a barrage of poisons on the surface of the earth without making it unfit for all life? They should not be called “insecticides,” but “biocides.” 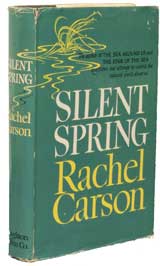 Carson asked: “How could intelligent beings seek to control a few unwanted species by a method that contaminated the whole environment and brought the threat of disease and death even to their own kind?”

The book had its impact. A nation once enamored of chemicals and their benefits grew uneasy and suspicious.

There are those that to this day blame Carson and her book for oversensitivity to chemicals, which, they say, do much good to eradicate disease. Her harshest critics call her a mass murderer for having caused a ban on DDT to kill malaria-spreading mosquitoes in developing countries. But that's simply untrue. The Stockholm Convention on Persistent Organic Pollutants allows the use of DDT for that use — and that use only.

Nonetheless, Silent Spring was only the first of what would be several punches to the chemical industry’s gut. In 1969, the Cuyahoga River in Ohio caught fire, a flare-up of oil-soaked debris — a two-hour blaze that lasted for decades as a symbol of chemical contamination. In 1976, a legacy of toxic dumping by a chemical company in Niagara Falls, N.Y., was found to contaminate homes and schools and sicken residents in a neighborhood called Love Canal. Then came the Bhopal disaster in 1984, in which a leak of methyl isocyanate at a Union Carbide plant in India killed more than 10,000 people and injured hundreds of thousands more.

Public outcry about toxic pollution and its impacts on people and nature reached critical mass. By the late 1980s, surveys found that only 37 percent of Americans thought the chemical industry was even essential. It ranked next to the bottom in public credibility; only the tobacco industry was lower. Even the nuclear power industry was seen in a more favorable light.

It was unprecedented: An entire industry’s right to operate was being questioned.

In 1988, the industry’s main trade group, the Chemical Manufacturers Association (now the American Chemistry Council) launched Responsible Care, a code of ethics for the chemical industry consisting of 10 general principles as well as guidelines on management practices for process safety, pollution prevention, product distribution, and community awareness and emergency response. It was immediately controversial: Under Responsible Care, companies were left to evaluate their own environmental performance. In 1988, CMA made participation in Responsible Care mandatory for membership.

Responsible Care was the first industry campaign to promote transparency, albeit of self-reported data. Its unofficial motto — "Don't trust us. Track us." — acknowledged the industry's lack of credibility. In 1992, the U.S. Public Interest Research Group (PIRG) took the CMA up on its motto and tracked the industry to see how well it was complying with its own guidelines. The study revealed that despite the industry's enthusiastic endorsement of Responsible Care, the program had not fully made its way inside the gates of U.S. chemical plants.

The industry’s struggles have continued, despite the industry’s overall improvement in chemical safety and hazardous waste disposal techniques. Such improvements have been offset — some would say overwhelmed — by the gusher of chemical introductions each year. According to the California Department of Toxic Substances Control, there are more than 85,000 chemicals in commerce in the United States, including 2,500 “high production volume” (HPV) chemicals, which are manufactured at a rate of more than one million pounds annually. “Nearly 45 percent of these HPV chemicals lacking adequate toxicological studies conducted to evaluate their health effects on humans and wildlife.” The principal U.S. law to track disposal and releases of toxic chemicals — a database called the Toxics Release Inventory — covers only 650 chemicals.

Meanwhile, about 2,000 new chemicals are introduced into commerce annually in the United States — a rate of about eight new chemicals every business day.

All of which brings continued challenge for business — chemical manufacturers and their customers — a half century after Carson’s book. In the age of transparency, where information is now more widely available about companies and products than ever before, how do you manage and track the chemicals being used? How do you balance public concerns with manufacturing needs? How much can customers be persuaded that the chemical you’re using are safe, assuming they are? And how do you define “safe” — for whom, at what stage, and for how long?

These aren’t easy questions. Do you adopt the Precautionary Principle, a conservative approach that leads to avoiding any chemical suspected of being problematic, or assume something is safe until proven otherwise? Each approach brings its own risks and reward. Company blacklists, graylists, greenlists, and whitelists help to sort out the worst (and best) options, though their use is not widespread.

One frustration is that alternatives to conventional chemistry are still emerging. Green chemistry is growing, embraced by many of the world’s largest chemical companies as well as many smaller firms, though it represents just a drop in the chemical bucket. Cradle to Cradle thinking — in which products are designed with ingredients that are sufficiently benign that they can return to the soil without consequence, or be put back into productive use in manufacturing — has barely left the drawing board. Biomimicry, another promising framework that mimics nature’s benign designs and manufacturing processes, remains relatively unknown. Toxic chemicals aren’t going away any time soon.

All of which brings us back to Rachel Carson — who died in 1964, just two years after Silent Spring's publication — and the concerns she raised in Silent Spring: Her words still ring true. I’ll leave you with a brief excerpt that speaks to the book’s currency, even after a half a century.

The history of life on earth has been a history of interaction between living things and their surroundings. To a large extent, the physical form and the habits of the earth's vegetation and its animal life have been molded by the environment. Considering the whole span of earthly time, the opposite effect, in which life actually modifies its surroundings, has been relatively slight. Only within the moment of time represented by the present century has one species—man—acquired significant power to alter the nature of his world.

During the past quarter century this power has not only increased to one of disturbing magnitude but it has changed in character.

The most alarming of all man's assaults upon the environment is the contamination of air, earth, rivers, and sea with dangerous and even lethal materials. This pollution is for the most part irrecoverable; the chain of evil it initiates not only in the world that must support life but in living tissues is for the most part irreversible. In this now universal contamination of the environment, chemicals are the sinister and little-recognized partners of radiation in changing the very nature of the world—the very nature of its life.