This is an excerpt from Rancher, Farmer, Fisherman: Conservation Heroes of the American Heartland by Miriam Horn. Copyright 2016 by Miriam Horn. Used with permission of the publisher, W.W. Norton & Company, Inc. All rights reserved.

In the desiccating heat of a late June Kansas afternoon, Justin Knopf is in the air-conditioned cab of his cherry red combine — a 13-foot-tall, 18-ton, $375,000 mobile harvesting factory — cutting a 40-foot-wide swath through a field of ripe grain. With his two brothers, he’s bringing in close to a thousand acres of hard red winter wheat, enough to bake 3.6 million loaves of bread. Strong spring winds have left some of the wheat “lodged”: bent to the ground, the slender heads too heavy with ripe grain to stand back up on their own.

So Justin is moving slowly, giving the combine’s rotating rake, or “reel,” a chance to right the stalks before the sickle lops them a few feet from the ground. A conveyor funnels a steady flood of the long, spiky heads into the machine’s monstrous mouth and on into its belly to be threshed and winnowed: the grains pried loose from the heads by a spinning cylinder armed with sharp serrated bars, blown clean by a fan and dropped through sieves. As the chaff and straw fall back into the field, the grain piles up in the hopper behind Justin’s head, glowing like a mountain of fairy-tale gold.

Sitting happily in Justin’s lap is his two-year-old son Andrew, content for hours to watch the workings of the bright shiny machines his Grandpa Jerry, raking a nearby field of alfalfa, calls “great big toys.” When his dad allows, Andrew pushes the buttons on the joystick that tip or raise the combine’s 40-foot-wide header with the satisfying whoosh and zing of an arcade game. Four-year-old Charlotte sits nestled against Justin’s side, absorbed in her books and princess dolls and ignoring their slow slalom through the field until Grady, a hired hand, brings the bright green grain wagon alongside. Expertly aligning it with the combine’s path, he matches speeds so that for a few minutes the two behemoths move as one. 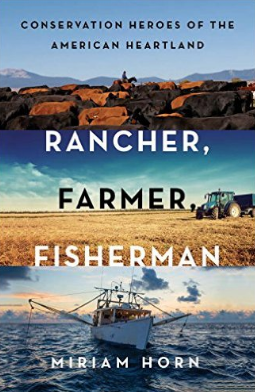 Charlotte loves to push the button that swings out the combine’s 28-foot auger and pours a torrent of grain into the waiting wagon. Her dad did too, thirty years ago when he was her age, though then it was a mechanical lever he’d get to pull, and sometimes they’d take off their shoes and climb right into the wheat to play. Filled to the brim, the wagon peels away and rumbles across the stubble to unload into the white tractor-trailer waiting at the edge of the field. Stenciled on the truck door is the logo of this family business, Knopf Farms, whose local roots stretch back 160 years: an alfalfa leaf and a cross.

Grady radios to say the hitch has failed on the grain wagon, so Justin pulls up and climbs down from the combine to improvise a quick repair. Though six feet three inches and broad-shouldered, he has the lanky legs, baggy dungarees, close-cropped hair, round cheeks and joyful guffaw of a sweet, earnest boy. Slower to reveal itself is his complexity and strength: a formidable firmness of conviction, a calm solidity as imperturbable as the prairie he loves.

Retrieving a set of giant washers from the shop, Justin threads them onto the hitch-pin to keep it from slipping loose again. Though he’s still as resourceful and adept with a wrench as his pioneering forebears, most of Justin’s tools are light years distant from the open tractor his dad used to bounce around on, its bare metal seat exposed to the sun and wind.

The GPS that steers his tractor maintains a course accurate to the inch, freeing Justin to attend closely to the field. When he spots a patch where the wheat is thin, its heads pale and scrawny where the alfalfa crop that preceded it drowned in pooling water and failed to renourish the soil, a shadow briefly clouds his handsome face and he makes a note to tell his dad which corners of the field will need leveling.

Over his right shoulder, multiple data streams flow across the combine’s computer screen: moisture levels in the grain, ambient temperature and humidity, pounds harvested each second—all mapped against ground speed, latitude and longitude to generate a real-time acre-by-acre map of yield. (As recently as 2010, he would know his yield only when it was weighed at the elevator, and only in 160-acre blocks.) Justin’s smartphone brings still more information: the history of the crops he’s grown here and the fertilizer he’s applied, wheat prices on the Chicago commodities floor, near- and long-term weather forecasts, details on the soil strata beneath every acre of his land.

The ill-timed winds have left the Knopf family stretched for hands. Jerry will work most of the night with a crew in the alfalfa fields, gathering up the wind-scattered hay before threatening rains leach out its proteins and much of its value, and leave a soggy mess that chokes off new growth underneath. (A perennial — which they cut four times a year for sale to dairies in Ohio and Indiana—alfalfa grows back like a lawn when mowed, if it’s not buried in darkness under wet hay).

Justin and his brothers Jeff and Jay will drive combines deep into the night — navigating by headlight the ghostly fields they know by heart — climbing down to catch a few hours’ sleep just before dawn, when the dew makes the straw too moist and pliable to chop. The faster they harvest, the less chance they have of falling prey to a hail-storm, which can shatter the herringboned heads of grain and in three minutes destroy an entire season’s crop.

Justin texts his wife Lindsey to tell her they’re in the “field across from Grandma’s” and she brings out sandwiches and cookies for a quick lunch, though with the wind still blowing the kids huddle in the car and their parents' picnic standing up, in the lee of Lindsey’s SUV. Under the midday sun, the wheat is a towhead’s white-gold, brilliant against the dark green of young corn and sorghum fields and, where the landscape swells, the stark blue of the Midwestern sky.

As the harvest hours stretch into the late afternoon the wheat turns caramel-colored and fragrant, like the nourishing loaves it will be baked into in Lagos or Cairo, the destination for most of the grain in the elevator Justin sells to, one of the largest in the world.

At six o’clock the extended family and hired hands gather again, this time for a harvest dinner prepared by Rachel, Jeff’s wife. Jeff and Rachel’s house, one of several scattered about the 4,500 acres the family farms, overlooks the wooded banks of Gypsum Creek where it meets the Smoky Hill River. It’s a special place for the family.

“Our grandpa grew up fishing right in this spot,” says Jeff. “I have a lot of channel catfishing, flathead catfishing memories. It’s a wonderful place to raise my two boys.” From here, the water flows into the Kansas (or “Kaw”) River, the Missouri and finally the Mississippi, where it travels 700 miles to the Gulf.

“Farming along this creek, seeing it all the time, you’re aware of the interconnectedness, of everyone and of the water and the land,” says Justin. “You’re reminded that what we do as we farm impacts folks on down the river.”

How farmers, millers, bakers and brewers are reinventing bread

What Michael Pollan gets wrong about Big Ag

Can an ex-Googler use big data to help farmers grow more food?