Ghana’s per capita income is $31 a week, according to the World Bank. But the roughly 500 female farmers who cultivate and harvest the leaves of moringa oleifera trees in the Tamale region of the West African nation earn five times that amount.

That's because the women supply ground leaves of the nutrient-rich moringa plant to Oakland-based Kuli Kuli Foods, which markets and sells energy bars, teas and nutrition supplement powders made from the "superfood" at stores including Whole Foods.

For the Ghanaian women who work at the beginning of the Kuli Kuli supply chain, skills such as hygienic food processing and packaging have helped both boost the products’ utility in the local market, as well as given them a toehold in the global export market.

The farmers in the cooperative were previously subsistence farmers with very little power. Now, they are exemplary footsoldiers of the "base of the pyramid" model of economic development — a movement to start self-sustaining business operations in impoverished Third World communities.

"The poorest people in the world grow food for a living. The people at the base of the pyramid are all farmers, but subsistence farmers. So when you invest in those farmers you are lifting up their economy, giving them a way to earn an income," said Lisa Curtis, the 27-year-old founder and COO of Kuli Kuli Foods.

"For us, just the idea we have the opportunity to help people grow this plant that is incredibly nutritious and grow it right here where it was hardly eaten, and benefit from it and earn an income from it means a lot."

A former Peace Corps volunteer who learned about moringa from villagers when she served in Niger and suffered from a lack of vitamins, Curtis aimed to start a business where West African communities could benefit by their own enterprise.

Because Kuli Kuli pays what it considers fair wages, the company reports that farmers whose incomes rose are also buoying their whole village economy by spending on school fees, clothes and better food for their children. They are circulating wealth that wasn’t there before and feeding aspirations of others to do the same.

Back in Oakland, Kuli Kuli is also reaping the rewards of sourcing a unique product. As the first U.S. food manufacturer to use moringa as the major ingredient in food products, demand is growing quickly. Sales are on track to triple this year, Curtis said, and pass $400,000 from the sale of $2.99 health bars, teas and powder protein supplements in the U.S.  Farmers keep about 25 percent of the moringa they grow for sale to the local market or for their families. 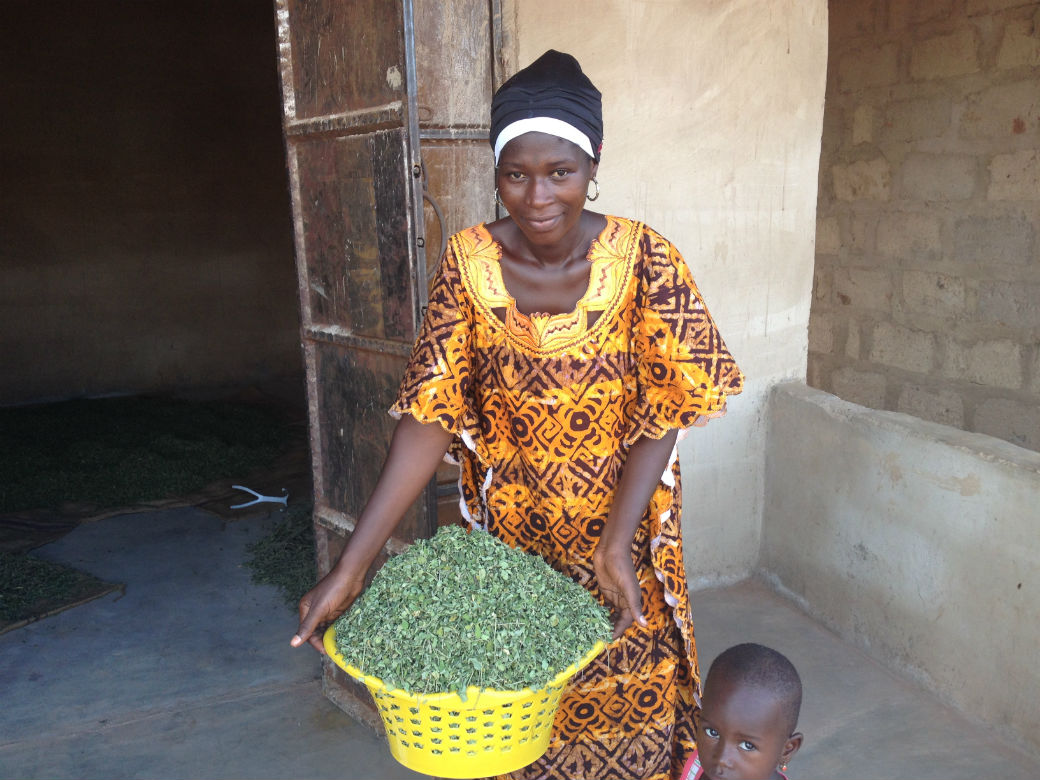 In the U.S., Kuli Kuli hits upon a few trends that are fueling that growth: consumer interest health foods — moringa has 15 vitamins and nutrients and 46 antioxidants — and a desire by consumers to buy products that do good (or at least less bad) in the world. The double bottom line approach is key to both the company's marketing and its success, which, in turn, has allowed Kuli Kuli to finance the Ghana farm cooperative’s purchase of equipment needed to process foods for U.S. export.

“We’re providing financing in the form of pretty large pre-payments, as well as loaning them money so they are able to do all of this work to meet our standards and then harvest the moringa,” Curtis said.

Kuli Kuli is part of a new crop of businesses engaging populations at the base of the pyramid.

Spurred by the same double-bottom-line instincts — and heightened consumer consciousness about what is happening at the other end of product supply chains — social enterprises are being formed by Western entrepreneurs as well as larger companies.

According to many economists, such efforts to set up quasi-independent manufacturing or production businesses are working to provide more than one-time Band-Aid approaches to world poverty.

Yet such enterprises typically battle similar obstacles that Kuli Kuli encountered working with farmers in places with no business systems or infrastructure in place. Those missing pieces, in turn, reinforce the very reason that under-developed economies remain under-developed.

Writing in Harvard magazine about business school author C.K. Prahalad's book "Fortune at the Bottom of the Pyramid: Eradicating Poverty through Profits," editor John Rosenberg describes a growing interest in launching social enterprises in the poorest of poor countries and how Prahalad and other theorists believe that private enterprise is the only way to lift them out of a cycle of poverty.

Still, enterprises in rural communities run into a host of infrastructure and business system deficiencies, from lack of all-season roads to bring goods to market to lack of electricity to the fact that most people in these rural areas don't use banks or have any cash flow.

Financing notoriously has been the biggest stumbling block; banks don't want to finance an enterprise whose goods may not make it to market or which might fall apart when electricity stops. Still, too, potential abounds in vulnerable poor areas for labor abuses, environmental degradation and other notorious supply chain ills.

The question now, as countries and businesses turn to the exigency of tackling climate change, is whether new approaches can address these ingrained challenges. In the meantime, businesses both big and small are watching to gauge how — or even if — new models can be implemented and paid for at scale.

Financing with a tool for another purpose

As governments buckle down to reduce carbon emissions and pass laws to stave off climate change, a new financing tool has emerged that could solve this logistical piece of the puzzle: income from carbon offset purchases.

Jonathan Shopley, managing director of the Carbon Neutral Company, said he is excited about the possibilities.

“In my experience, there are technologies that are incredibly relevant, but the expense of building them out can be formidable,” Shopley said in an interview with GreenBiz.

But after 18 years in the business of packaging and selling carbon offsets that companies and countries buy to meet regulatory emissions reductions targets, Shopley is seeing a transformational impact of these offset purchases, aside from carbon reduction.

“One thing that defines a carbon credit is functionality — the direction of money to something that would otherwise not get money,” Shopley said. “We have directed a lot of our clients’ money to projects in developing countries, and it has shown us that financing appropriate delivered technologies that are being accepted in those projects can be transformative."

That's all possible because of the international system of carbon offsets that have grown up since the Kyoto Protocol was signed 18 years ago, along the trend of more national governments requiring large emitters to either pay carbon taxes or trade for carbon offsets. Carbon offsets have been evolving ever since, and Shopley's Carbon Neutral Company formed as the world’s first business packaging and selling carbon offsets to companies and consumers.

The Kyoto Protocol requires that carbon offsets, to be counted, must reduce carbon or raise opportunity in countries where no reduction targets were set because their economies are still developing. Signatories to the Protocol agreed to reduce carbon emissinos by 5.2 percent from 1990 levels by the period 2008-2012.

Now, Shopley said, the world is beginning to see the value of these offsets not only as a way for large companies and countries to reduce carbon in a net global way, but as a financing tool for economic development in places where it is hard to attract capital.

SELCO’s principles note on their website that India’s rural banking system just didn’t have a portfolio for financing solar lighting technology, and yet — as India strives to overcome the problems of scarcity of electricity —  solar micro-grids are becoming the way that many villages, schools and standalone manufacturing projects in rural areas are getting energy.

SELCO provides solar in underserved communities. It finances these projects in many ways, but one increasingly popular way is developing packages of projects that can be sold as carbon offsets through the Carbon Neutral Company. 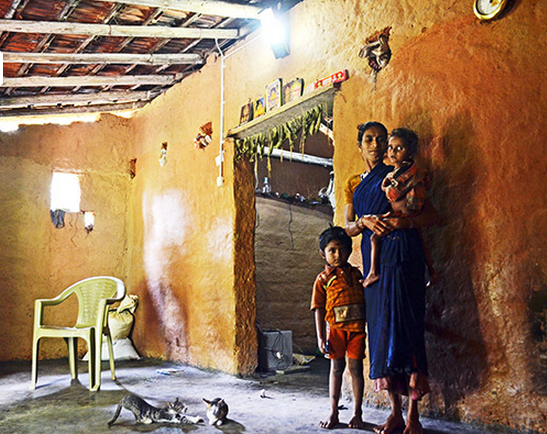 Shopley says similar social enterprise financing packages are being formed in Guatemala, Africa and throughout the developing world.

In Guatemala, one such effort receiving carbon offset money is Ecofiltro, a tiny company manufacturing water filters using technology applied to locally available materials — clay pots — to create water filters. Manufactured locally by Guatemalans, Ecofiltro is not only improving health by expanding access to clean water, it is also providing jobs and a manufacturing infrastructure in the hills outside of Antigua, Guatemala.

One major differentiator between these enterprises and philanthropy or donations is an emphasis on economic empowerment, creating real job opportunities

“That is in stark contract to philanthropic programs where filters are handed out,” Shopley said.

Instead, Guatemalans are manufacturing the filters for their own communities and learning how to operate a sustainable business.

“Our experience with carbon offsetting is taking us directly into this space of locally based manufacturing, distribution, maintenance of appropriate technologies in country," he said. "We are getting to maximize return on the use of these technologies, reduc(ing) carbon through the carbon offset and help(ing) eradicate poverty."

Although one perennial sticking point with carbon offsets is the extra step of adding a rigorous mechanism to ensure that carbon is actually reduced, Shopley said that the approach — if done well — can pay dividends in other social and economic realms.

“You can build a series of co-benefits that are much more empowering," he said. "You can see a chain of how health benefits are supported or gender equality is supported."