Google's Urs Holzle, the Renewable Energy Buyers Alliance and John Goodenough have the imagination and capacity to make the impossible possible for renewable energy.

There are moments when, suddenly, big change looks much more possible than previously imagined.

For advocates of renewable energy, one of those moments came two years ago when executives from a few major corporations met with officials from a half-dozen utilities. It was the first meeting organized by the Renewable Energy Buyers Alliance (REBA).

"There was a lot of skepticism coming into room," recalled Marty Spitzer, senior director of renewable energy and climate change at the World Wildlife Fund, one of REBA's founding organizations.

"The utilities thought the corporate customers were threatening to go off grid," and were skeptical as to why corporations would want to go renewable while the companies presumed the utilities weren’t interested in their needs as customers because utility revenues were already assured by rates.

Businesses want to work in collaboration with utilities to make it easier to acquire renewable energy.

"A couple of utilities showed they were really interested in what the corporate customers had to say,” and things began to change, Spitzer recalled in an interview. “Business said they want to work in collaboration with utilities to make it easier to acquire renewable energy. That request opened the door," he said, and renewable acquisitions have accelerated since.

REBA — a collaboration between the Rocky Mountain Institute's Business Renewables Center,  Business for Social Responsibility's Future of Internet Power intiative, the World Resources Institute's Charge Initiative and WWF's Corporate Renewable Energy Buyers' Principles, which is also supported by WRI — had already made it easier for corporations to buy renewable power through creating a methodology for power purchase agreements with energy producers.

Now, it’s making it easier for companies to deal directly with utilities to get that power. As a result, 13 utilities operating in 10 states now offer green tariffs for procuring renewable power. 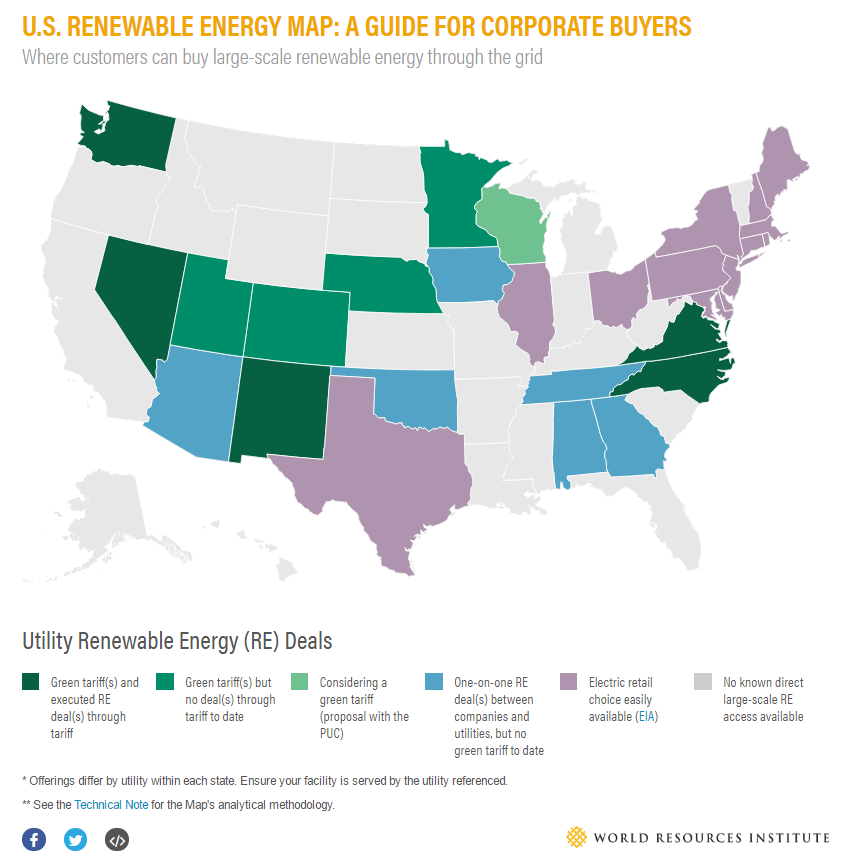 Sure, that’s only a drop in the nation's energy consumption. REBA's goal is to see its corporate members install 60 gigawatts of renewable energy by 2025. But the change is on its way.

Sure, the massive facilities that process the world’s requests on the Internet do use a lot of energy — 2 percent of the world’s electricity consumption today, by one estimate. And with Internet use soring, data centers are proliferating.

Then, according to Urs Holzle, Google senior vice president for cloud infrastructure, "two years ago, we tried a new way that uses machine learning."

Google cut the cooling energy use in its data centers by 40 percent.

"We found out that if we fed the machine learning system the history of the last year, where people made changes by hand and sort of what the impact of each was, the system learned much better settings some of which were not intuititve," and made adjustments multiple times an hour, 24 hours a day, to keep cooling in an optimal place, Holzle said in an interview.

A data center, as you can imagine, has lots  to adjust and monitor. "There are just lots and lots of knobs. You have pumps and fans.You have 10 cooling towers," and "for humans it is really difficult" to keep them optimally adjusted because their minds can't compute all the variables quickly enough, Holzle said. 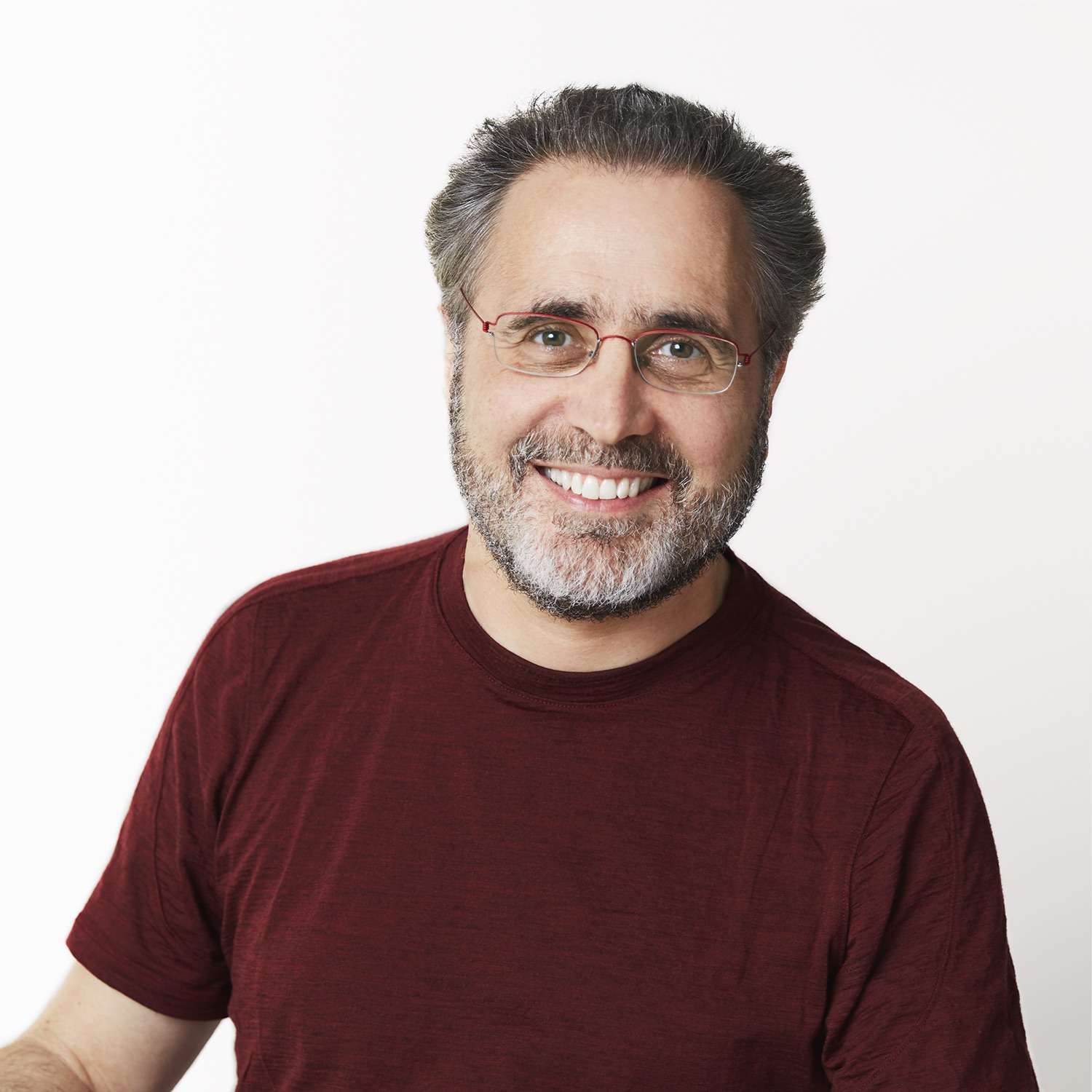 Holzle led the energy efficient data center redesigns. He told GreenBiz that every time the team thought it had reached some limit in squeezing out the most energy efficiency possible, they decided to go for more.

Holzle also propelled Google to aggressively pursue renewable power installations and renewable power purchase agreements. This year, Google reached its goal of 100 percent renewable energy and carbon neutrality having installed 2.6 gigawatts of renewable power, more than any other company on earth. The emissions savings, according to Google, is equivalent to taking 1.2 million cars off the road.

For these accomplishments, Holzle also received the C.K. Prahalad early this week.

Physicist Dr. John Goodenough turned presumptions on their heads three times in his career.  He developed the magnetic element that allowed the first random-access memory systems for computers. Later, he helped develop the first lithium-ion battery, which transformed wireless communications and computation into a marketable technology. 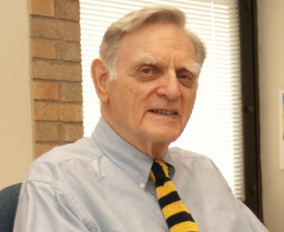 And now Dr. Goodenough is co-developing a new battery technology that could provide the breakthrough needed to make battery energy storage a widely used, low-cost technology in electric vehicles and on electric grids.

Goodenough said that lithium-ion batteries, while they allowed "the wireless revolution," are not practical for storing energy in electric vehicles because their components are flammable.

But he predicted that in four years, he and his collaborator M. Helena Braga of the University of Porto, Portugal, and their teams of scientists will have developed and commercialized a battery technology that is safe, low-cost, charges quickly and lasts longer than current EV batteries. And it uses widely available sodium rather than lithium.

New storage battery concepts show great promise to be developed to power an electric road vehicle at a competitive cost within the next four years.

For work on this battery, as well as his life-long achievements in battery and computer technologies and sustainability, Dr. Goodenough received the C.K. Prahalad award Tuesday night

"The development of a solid glass electrolyte by Maria Helena Braga of the University of Porto, Portugal (his collaborating partner) has enabled us to develop new storage battery  concepts that show great promise to be developed to power an electric road vehicle at a competitive cost within the next four years," he told the audience at the awards ceremony in San Francisco.

For his efforts, he received thunderous applause and a standing ovation.