What a difference a year makes. Just 12 months ago, procuring clean power was a daunting process for corporate buyers — in large part because available solar and wind projects were difficult to identify, utilities weren’t always ready to engage and the commercial contracting process was still relatively undefined.

Today, not only are more businesses — and not just multinationals — actively participating in the alternative electricity marketplace, more utilities and developers also are amenable to the idea. Still, make no mistake: it remains difficult to procure clean power, especially electricity that can be used directly within a company’s operations.

The process has become more straightforward thanks in part to the coordinated advocacy of the four non-governmental organizations acting in concert as part of the Renewable Energy Buyers Alliance (REBA): BSR, Rocky Mountain Institute (RMI), World Resources Institute (WRI) and the World Wildlife Fund (WWF).

Although the group has collaborated on an ad hoc basis for several years, their decision to formalize that collaboration 12 months ago came at exactly the right time. The mission announced at their launch: help commercial buyers "deploy" at least 60 gigawatts of clean power by 2025 – representing new generating sources. (REBA’s next formal summit is planned for Sept. 17 to Sept. 19, leading into VERGE 2017.)

What’s more, the pipeline of projects (potential and otherwise) represented by the BRC "marketplace" stands at more than 23 gigawatts. That’s a good thing: Separate data from a new report published in April, Power Forward 3.0, suggests that more than two dozen Fortune 500 companies have committed to running the entirety of their operations using renewable energy sources.

"Corporates have gotten more sophisticated about the process," said Lily Donge, principal with RMI’s electricity practice, where she manages the BRC. "They are more savvy about negotiating with developers on the market." 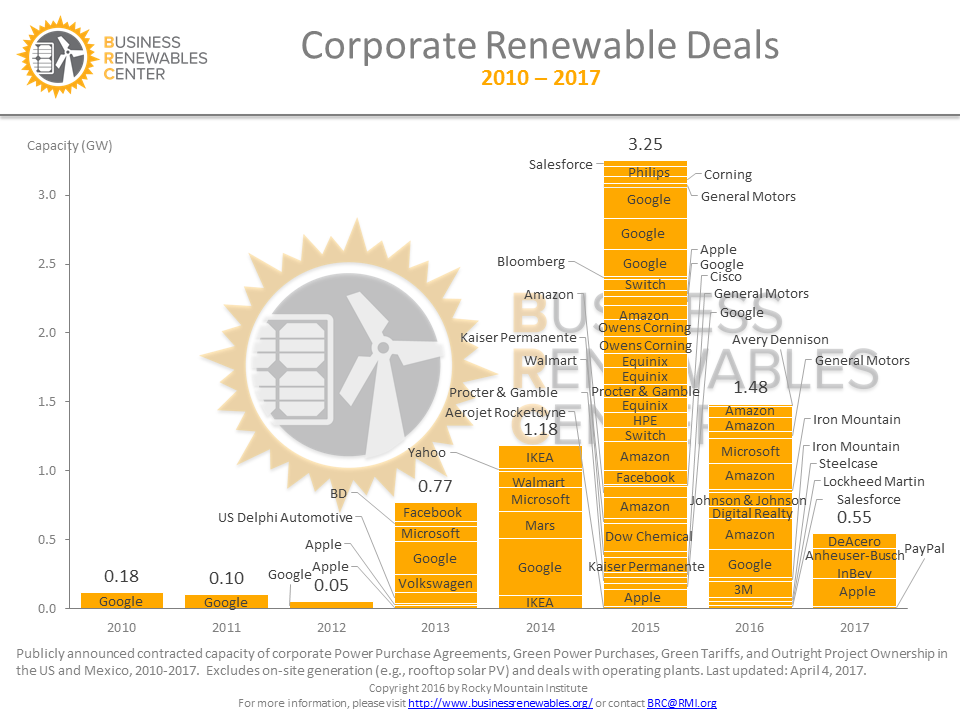 Each of the REBA member organizations contributes to the overriding strategic mission in different areas, from identifying states friendly to their mission to brokering discussions between corporates and utilities to ensuring that success stories get mainstream attention.

One of BRC’s biggest missions is education. The group has held more than 30 boot camps and publishes case studies that outline examples of constructive relationships between corporate buyers and utilities, such as the back story of e-commerce and cloud computing giant Amazon’s arrangement with Dominion Virginia Power.

The diversity of companies involved in the renewables movement is evolving quickly, according to Donge. BRC plans to chronicle their experiences so that companies can better understand risks that might be particular to their industry sector.

"Not all buyers are the same," she said, noting that hospitals and universities are among the organizations becoming more proactive.

One of the most influential buyer groups, of course, remains cloud computing and Internet companies such as eBay, Facebook and Salesforce, all of which are involved with REBA member BSR’s Future of Internet Power initiative. In fact, they and almost 20 other companies have committed to their own twist on the Corporate Renewable Energy Buyers’ Principles. It’s called the Corporate Colocation and Cloud Buyers’ Principles, and it has six main declarations, outlined in the graphic below. 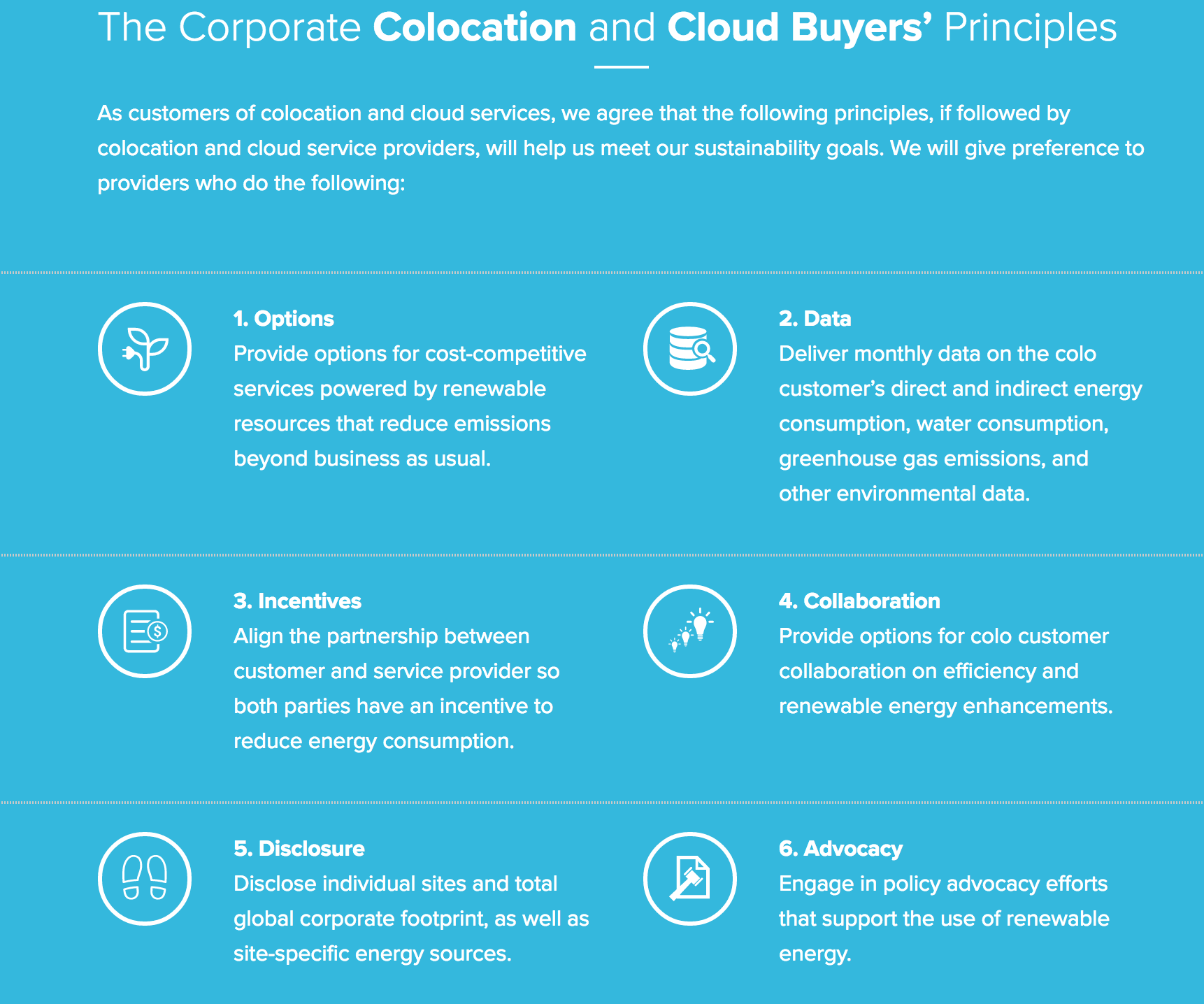 "We hope this becomes a ‘North Star’ resource for all companies that use data centers," Gallo said. "Some of them aren’t aware of the digital carbon footprint these operations create."

Bringing utilities into the fold

Since REBA formalized its ties in May 2016, the number of U.S. regulated utilities offering green tariffs, or financial arrangements that enable business to procure clean power more easily and cost-effectively directly from utilities, also has increased.

"They get that they are at risk of losing their loads," said Letha Tawney, director of utility innovation at WRI. "They have woken up to that, and they get that they have a positive role to play."

In April, for example, Omaha Public Power District (OPPD) started talking up a new rate plan that caters specifically to large buyers of renewable electricity. Facebook also was involved in helping design the program, which caters to companies seeking to procure at least 20 megawatts of capacity. It took the utility about four months to design the offering and secure the necessary approvals.

"We have recognized the need to continue to evolve our rate offerings to attract new companies and assist with current companies’ expansions," said Tim O’Brien, manager of economic development for OPPD, in a statement. "And we were able to create a new plan, within a rate framework we already had, to support this trend."

Another program to watch comes from Washington state, where Puget Sound Energy has introduced an offering called "Green Direct" that caters to cities, public sector organizations and companies. The idea is to find buyers that commit to long-term contracts, enabling the utility to invest in projects. Among those that already have signed up for the first one: King County; several cities including Anacortes and Bellevue; and local facilities for REI, Starbucks (which hopes to include all of its Washington state stores) and Target.

Tom MacLean, manager for customer renewable energy development with Puget Sound Energy, credited REI with helping inspire the idea of this program several years ago. "We’re trying to be their energy company of choice, even though they don’t have a choice," he said.

Right now, Green Direct caters to pretty large companies. In order to participate, an organization needs to make a 10-year commitment to purchase at least 10 million kilowatt-hours annually, he said, although the utility hopes to accommodate smaller contracts over time. Its focus is on inspiring local development, to keep transmission costs as low as possible.

"We were well along this path before we were introduced to REBA, but it was good to partner," MacLean added. "We were growing together. We just didn’t know it."

Another state to watch closely is Minnesota, where XCEL Energy got permission in January to sell up to 50 megawatts of a new wind farm to customers directly as part of its Renewable Connect program. The chart below illustrates where buyers can arrange large-scale deals through the grid. (Click here for an interactive version with more information about the highlighted markets.) 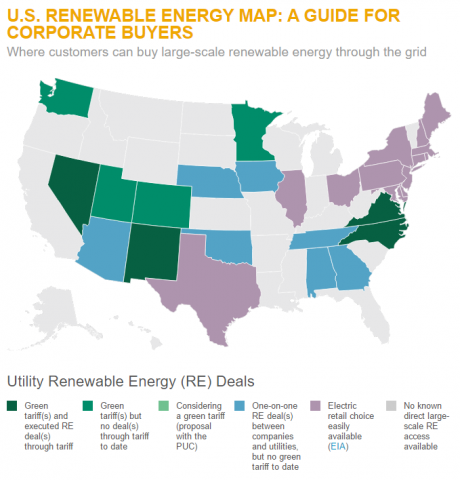 Looking beyond the United States

Marty Spitzer, senior director of climate and renewable energy for WWF, said utilities are working much harder to deliver similar offers, which is necessary if REBA is to reach its aspiration of adding 60 GW of clean energy to the grid. After all, companies can still only buy directly from developers in 17 U.S. states.

By the end of 2016, about a half-gigawatt of clean power was linked to special contracts in 10 states that are pioneering this space, according to the Power Forward 3.0 report, co-authored by WWF, Calvert Investments, CDP and Ceres.

"This is about making renewables the norm," Spitzer said. "Utilities are really starting to get into place and we have spent a lot of time showcasing and helping create those deals."

Another development to watch closely in the coming year: activity in markets outside the United States, particularly in places such as India, China and Mexico. "All of the REBA members have some global footprint," Spitzer said.

So it stands to reason that they will seek arrangements in places such as Europe and Southeast Asia, closer to their international operations and to their supply chain partners. "When you do an analysis  of the energy consumed by these companies, much of it is in their supply chain," noted Tawney. "Across the board, the REBA partners are hearing a lot of interest from the big buyers in other markets."

Whither climate tech? A new fund, plus some predictions

What corporate fleet managers want out of EVs