REBA shows what it takes to scale corporate renewable energy

Amory Lovins, chief scientist and chairman emeritus of the Rocky Mountain Institute (RMI), has an expression I love: applied hope. It captures that rational middle ground between the unbridled optimism of a noble and vital goal — like taking action on climate — and the practical path to actually doing something toward that goal.

I felt a strong sense of applied hope at the Renewable Energy Buyers Alliance Summit (commonly referred to by its country-western-tinged name, REBA) I attended Thursday at Microsoft in Redmond., Wash.

As GreenBiz senior writer Heather Clancy described recently, REBA is the creation of a heavyweight group of three-letter NGOs: BSR’s Future of Internet Power working group, RMI’s Business Renewables Center and the Corporate Renewable Energy Buyers’ Principles, a project of WWF and WRI. The goal is to radically scale corporate adoption of renewable energy projects, specifically to get to 60 gigawatts by 2025.

What was striking at the Summit was the engagement, breadth and clout of the participants in the room. Every flavor of big company was represented: tech giants like Microsoft and Facebook, major retailers like Walmart, auto makers from GM to Tesla and, more so than last year, utilities as well as renewable energy developers.

What was striking at the Summit was the engagement, breadth and clout of the participants in the room.

Microsoft president Brad Smith kicked off the meeting by noting the key role that energy now plays at his company: “When I joined the company 20-plus years ago, I never imagined that energy would be so important to our business.” He talked about Microsoft’s commitment to get its data centers using more than 50 percent renewables by 2018, and that the company would “use its voice” to further the push for renewables.

Facebook’s Bill Weihl called for “collaboration and speed that fits with companies’ competitive interests.” However, an energy buyer from a large industrial player replied that manufacturers sometimes have different considerations than tech companies or retailers and those differences need to be kept in mind as the alliance grows. 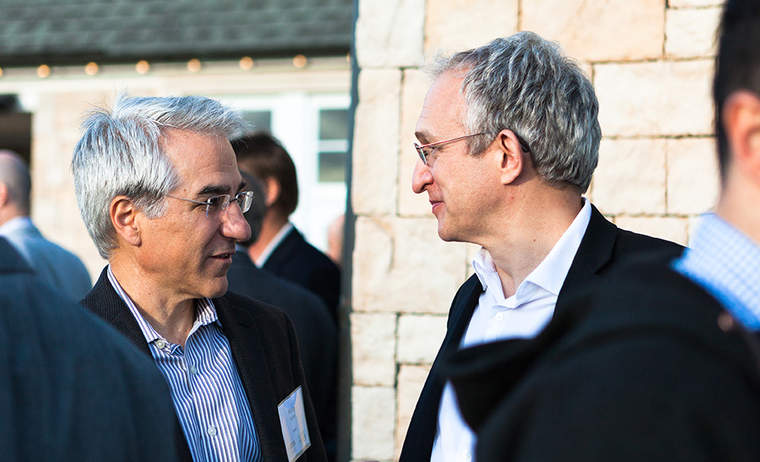 ©Keith D. Arnold/WWF-US
<p class="p1"><span class="s1">WWF's Marty Spitzer and Rocky Mountain Institute's Herve Touati discuss clean-energy buying.</span></p>
Berkshire Hathaway Energy’s Jonathan Weisgall delivered the day’s most memorable line in describing himself as a “bottom-feeding scum-sucking DC lobbyist.” More substantively, he talked about the business case, how renewables were scaling and the diverse constituents that benefit from it. For Berkshire Hathaway, renewables are a clear risk hedge against uncertainty in fossil fuels. And in many places, they are reaching grid parity.

He also outlined the emerging and diverse constituencies behind renewables: “This isn’t just about the Googles and Facebooks. Our Iowa farmers love the wind payments we send them.”

Currently only 17 of the 223 Fortune 500 companies that have sustainability goals have embarked on renewable projects.

Hervé Touati, Managing Director of RMI, presented some great data showing the upside for corporate renewables. One interesting fact: Currently only 17 of the 223 Fortune 500 companies that have sustainability goals have embarked on renewable projects. This highlights the great untapped potential if renewables companies can gain momentum among a wider swath of players.

The REBA initiative is ambitious, no doubt. As Marty Spitzer of WWF and others pointed out, buying renewables has not been easy for companies, burdened with financial, technical and regulatory hurdles. REBA aims to help streamline that process and make platforms and best practices available to help develop scale.

Applying best practices and policy muscle to dramatically increase the pool of corporate renewable energy projects. Sounds like a tangible goal, not just a hope.