In an era of rising congestion and shrinking budgets, big cities face a major challenge making the most out of aging transportation networks. Some, such as London and Singapore, have opted to use a stick: congestion fees to nudge commuters out of their cars, onto subways, buses, bikes or even their feet. Yet congestion fees can be politically unpopular. Similar efforts in New York City have failed.

But what if city planners could use a carrot, instead, to induce different commuting behaviors? That’s the vision behind re:route, a new program being rolled out by Transport for London (TfL) and developed by New York-based Recyclebank, a pioneer in the field of using incentives to spur greener behaviors.

Announced this week, re:route is an iPhone-based app that encourages Londoners to walk and cycle more by awarding points for each trip they re-route away from conventional alternatives. The credits can be redeemed for valuable rewards, from food perks to products, at participating retailers. 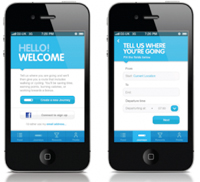 For London, the goal is to reward switches that improve public health, reduce pollution and ease congestion. “By virtue of human nature, people tend to respond more immediately to a positive signal than they do to a negative one based on penalties,” said Ian Yolles, chief sustainability officer at Recyclebank, in a phone interview last week.

Part of a broader effort by TfL known as Get Ahead of the Games, the launch of re:route is timed in advance of the summer Olympics. (Read more about the greening of the Games here.) With 350,000 visitors inbound, TfL hopes to lure Londoners out of the city’s overtaxed subways and taxis and onto bicycles and footpaths. Last week, the city’s taxi organization announced that 40 percent of drivers would quit the streets during the Olympics in anticipation of potentially paralyzing gridlock. Many city streets will be closed for official use only.

TfL’s goals with re:route reach past the Olympics though. As part of a multidecadal, city-wide effort to lower greenhouse gas emissions and improve public health, TfL has set out a long-term goal of boosting cycling by 400 percent by 2025, compared with 2000. TfL also wants to boost the share of trips done on foot above its 24 percent share.

For Recyclebank, re:route is a first step into the urban transportation market, a bid to help cities devise new solutions to help ease the large and growing problem of congestion, spur the use of public transport and enhance public health.

By marrying available technology -- mobile phones, apps, GPS, transport schedules and online maps -- "we can create greater efficiencies in cities, catalyze citizen engagement and drive behavior change for public benefit," Yolles said. "We’re launching this in London, but it would be easy to reskin the front end to use in New York, Chicago, Washington or San Francisco."

Here’s how re:route works: After downloading the free iPhone app and signing up for a free Recyclebank account, a user enters a starting point and destination. The app will show different options, including walking, cycling (using either one’s own bike or a bike share) and public transportation. Upon arrival, re:route uses GPS to sense the end of the commute and rewards the user with five Recyclebank points. Users also see the calories they’ve burned, and CO2 they’ve saved compared to other transport modes.

One of the appealing features of the program is that it encourages small-scale incremental shifts. Rather than substitute an entire subway commute with a bike ride, for instance, re:route is built to exploit “switchpoints”: spots along a regular commute where a user could exit and switch modes. “So perhaps you exit the tube a stop or two early and walk or bike the remainder,” Yolles said. This increases exercise, reduces congestion and can shake up force-of-habit commuting behaviors.

Behind the scenes, the complexity is much greater. The app relies on information provided by TfL’s journey planner, which serves up relevant data about location, travel distance and trip time, and helps calculate travel options. “TfL’s choice to develop and open that data to developers has made all of this possible,” explained Yolles. TfL hopes to use the data to guide future plans. As users and trips multiply, the resulting database can help TfL refine or augment existing transportation infrastructure.

Back on the London’s streets, users will find the program is geared to generate meaningful rewards quickly. By joining, participants earn 75 points. For each trip that is rerouted to a greener option, five points are added. A back of the envelope calculation shows that if a participant modifies each commute, five days a week, 50 weeks a year, the annual tally will hit 2,500 points, though it would be easy to boost that figure significantly with addition trips during the day.

At this rate, the rewards initially offered under the program are easily achievable, and include both useful and mildly indulgent offers. A quick sampling: For 75 points, participants can get £5 off a £25 tab for food, wine or booze at Marks & Spencer. For 100 points, they can score half off a Champneys Town & City Spas treatment, or get a free bar of soap at LushFree. Recyclebank predicts participants will be able to earn up to £250 worth of credits per year using re:route.

To tap users’ competitive impulses, the app awards achievement badges for accumulated savings, and makes it easy to share results through Facebook and email.

It remains to be seen just how much re:route can influence the tide of London’s commuting crowds. With a population of 7.6 million, plus another million commuting to and from the city each day, Recyclebank hopes to attract more than 100,000 users near term, with the ultimate goal of “motivating and tracking” half a million journeys per week.