'Red flag for COP26': Most high-carbon companies shooting 'wide of the mark' for a 2C world

The vast majority of companies in carbon-intensive industries such as oil, electricity, cement, metals and transport remain far off track for alignment with the Paris Agreement goals, which "raises a red flag" ahead of the critical United Nation climate change talks in Glasgow later this year.

That is the headline warning from the multi-billion-dollar-investor-backed Transition Pathway Initiative (TPI), which last week unveiled its latest deep-dive analysis (PDF) of high carbon industries' preparedness for the urgently needed shift to a low carbon economy.

It found more than 80 percent of the highest-emitting companies in the world remain off-track for a 2 degrees Celsius of warming trajectory, the lower-ambition target of the Paris Agreement, and few are taking active steps to disclose and address the significant risks to their business posed by climate change and the related net-zero transition.

The study looked at 238 energy, industrial and transport companies on their projected carbon performance, and found that just 43 firms — 18 percent — have emissions plans and targets in line with limiting global warming to 2 degrees C, and only 13 percent are aiming for below 2 degrees C of warming.

Unsurprisingly, oil and gas firms and airlines were found to be particularly lagging behind with their carbon performance, while the report also highlighted urgent need for improved decarbonization efforts across the steel and cement sectors.

More positively, across all sectors, average emissions intensity is falling by a rate of around 1.9 percent annually, and 95 percent of the firms assessed at least have a broad policy commitment to act on climate change, the report found.

But as the TPI points out, the rate of decarbonization is not taking place nearly fast enough to reach the Paris Agreement goals to avoid "dangerous" levels of climate change, and far too many firms are still failing to put in place targets and measures to back up their commitments and ramp up the pace of decarbonization.

The IEA has warned while carbon emissions will likely decline this year, in the medium term the coronavirus outbreak could slow down the low-carbon transition.

As a result, it said these high carbon firms risked becoming far less attractive for long-term investors, particularly in view of the pressure on national governments to strengthen their climate strategies ahead of and during the crucial U.N. climate change summit in Glasgow, which remains scheduled for later this year.

There has been speculation that the summit could be delayed as a result of the coronavirus pandemic, but U.K. Foreign Secretary Dominic Raab confirmed last week that the government still would like to host the summit as planned in November, while recognizing a postponement may become necessary in the months ahead. Commentators also noted that under the rules of the Paris Agreement, even if the summit is postponed, governments still would be expected to come forward with updated national climate action plans before the end of the year.

Loretta Minghella, first church estates commissioner at the Church Commissioners for England, one of the TPI's key supporters, said the fact that four in five high-emitting companies remain wide of the mark in their climate performance would "worry the markets."

"Most of the world's largest investors have accepted climate change as a material financial risk, yet [Friday's] results show companies are not responding with the ambition and pace required," she said. "These results raise a red flag for COP26 in November when the aspirations set out in the Paris agreement are due to be turned into tougher national commitments, and we can expect to see more capital flow away from those companies failing to align with a 2C pathway."

Supported by more than 67 investors together representing almost $19 trillion in assets under management, the TPI's work is aimed at helping to inform asset owners and managers on the actions needed to encourage high-emitting companies towards more ambitious decarbonization efforts.

Research for the report was undertaken by the Grantham Research Institute on Climate Change and the Environment at LSE, with the data provided by FTSE Russell, and funding from asset managers including Aberdeen Standard, BNP Paribas, Legal & General, Neuberger Berman, and Robeco.

The report's findings Friday do highlight some bright spots and improvements over the past year since the group's last major assessment in 2019.

For example, it shows European companies in carbon-intensive industries are leading their global peers in the low carbon transition, with more than a third — 36 percent — having set out plans to reduce their emissions in line with 2 degrees C or 1.5 degrees C of warming, as set out in the Paris Agreement.

In contrast, just 16 percent of high carbon firms assessed in the United States, 10 percent in Japan, 5 percent in China, and none whatsoever in Russia and Africa, have done the same, according to TPI.

The group also found the transition to a low carbon economy was "well underway in some sectors," including shipping, paper manufacturing and electric utilities, which together accounted for most high carbon firms around the world targeting 2 degrees C or below trajectories.

Moreover, electric utilities and paper companies which have set decarbonization targets for 2025 are on average reducing their emissions by around 4 percent annually, which if the trend continued would more than deliver on their targets, the TPI said.

Additionally, there has been a slight uptick in companies across all sectors promising to decarbonize in line with 2 degrees C or below, with the proportion rising from 16 to 18 percent over the past year after firms such as U.S. carmaker Daimler and India's Shree Cement joined the fray.

But while the report notes a small but growing number of net-zero pledges from companies over the past year, it warns that these targets are often patchy in detail and can rely too heavily on carbon offsetting rather than emissions reductions — an approach "which presents risks," the TPI concluded.

More than 20 of the energy firms assessed in the report have set net-zero targets, it said, but the scope of these pledges varies and they often cover "usually much less than 100 percent of lifecycle emissions" across Scopes 1, 2 and 3. 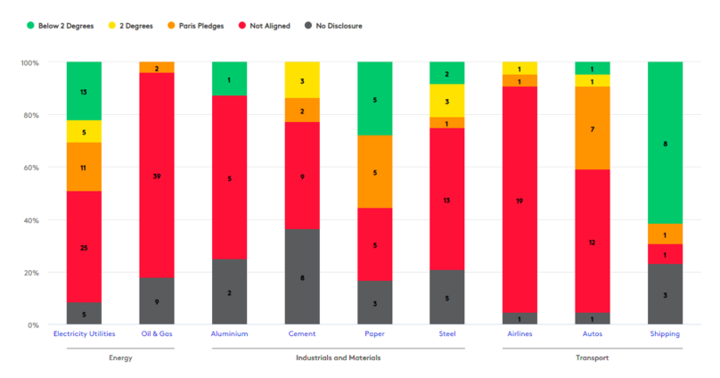 The report also assessed 332 high carbon companies on their climate risk governance efforts, which found 29 percent had stepped up their efforts in this regard over the past year.

At the same time, however, it found 9 percent actually had rowed back on their climate risk governance mechanisms, and overall concluded almost 40 percent of all firms assessed were still "demonstrably unprepared for the transition" in terms of their target setting, risk disclosure and climate policies.

Most of the world's largest investors have accepted climate change as a material financial risk, yet today's results show companies are not responding with the ambition and pace required.

Investors should, therefore, urge companies to put in place more advanced carbon management practices, such as tying climate change performance to executive pay and remuneration, and incorporating climate risks and opportunities into business strategies, according to the report.

But Faith Ward, TPI co-chair and chief responsible investment officer at Brunel Pension Partnership, warned that the sluggish progress on climate from carbon-intensive firms could be further compounded by the escalating coronavirus pandemic gripping the global economy.

"The IEA has warned that, while carbon emissions will likely decline this year, in the medium term the coronavirus outbreak could slow down the low carbon transition, as green investments are put on hold by cash-strapped governments and businesses," she said. "It is therefore of deep concern that so few companies were on the right path before the virus struck. Investors must now use their influence to ensure that climate commitments are ramped up, not discarded in the face of short-term financial pressures."

The TPI said it would look to significantly expand on its research and engagement in 2020, aiming to take in data from 800 high-carbon companies representing 80 percent of the greenhouse gas emissions associated with listed markets, in addition to placing more focus on investors and finance rather than just the high carbon companies themselves.

Coupled with today's findings, it places increasing pressure on high carbon companies to establish more ambitious decarbonization plans, particularly with hopes pinned on this year's climate summit in Glasgow to push countries to deliver on the targets set out in the Paris Agreement.

Yet even if COP26 is overshadowed or postponed in the wake of the coronavirus fallout, calls for a green stimulus to spark the global economy back into life could well gain traction, while growing support for the TPI amongst investors indicates asset managers are increasingly keen to get their investment portfolios in line with a climate-safe trajectory. Against such a backdrop, high carbon companies without clear and ambitious carbon reduction plans at the heart of their strategy soon could find themselves isolated.

How Michelin and Bridgestone are accelerating green tire innovations