After the biggest eating fest of the year in the United States — Thanksgiving Day — food waste is likely piling up in dumpsters and landfills, as leftover asparagus, squash, turkey, potatoes and pie get tossed.

With only 5 percent of U.S. households and businesses composting, and not nearly enough hotels, restaurants and stadiums donating extra food to hunger programs, the wasted food goes into garbage cans headed for landfills.

There, it decomposes and emits methane. Food waste and loss creates 3.3 gigatons of greenhouse gas emissions, according to the FAO.

In a world battling hunger, one in three calories of food produced is wasted, according to the UN Food and Agriculture Organization.

And as global leaders meet in Paris to negotiate how to mitigate global warming, it’s worth noting that if  food waste were a country, it would be the the world’s third largest emitter of greenhouse gases, right after China and the United States, according to the World Resources Institute.

Reducing food waste is a humanitarian, environmental and economic issue.

But it can also be a giving issue. Today, Dec. 1 is Giving Tuesday and nonprofit programs as well as tech-based startups have proliferated to help businesses divert excess food to the hungry and help consumers waste less. 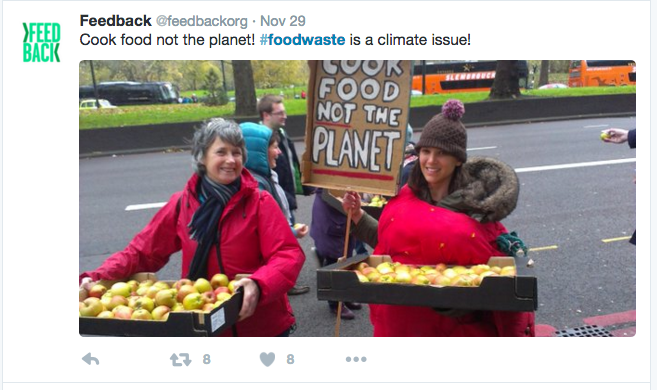 The U.N. FAO says that all of the world's roughly 800 million people who chronically experience hunger could be fed if food waste were completely eliminated.  Cities could save money on landfills, since food waste is the largest component of municipal solid waste.

“There is a big opportunity in all this excess food,” said Kai Robertson of WRI’s Food Loss and Waste Protocol, which it developed in conjunction with the Consumer Goods Forum, the World Business Council on Sustainable Development, the U.N. and several other international organizations.

The protocol is an accounting standard for measuring food waste, which they developed on the belief that the first step to solving a problem is measuring it.

LeanPath created an app for individuals and organizations to track their food waste.  This week it released a guide for food service companies on “20 waste-cutting tips Every Foodservice Chef Should Know.”

Food Cowboy is a logistics app that pairs  hotels, restaurants and caterers with hunger relief orgznizations in a timely manner so that when a hotel ends a big event and finds itself with lots of extra food it can find a nearby food pantry or soup kitchen in need of donations that same day.

“Our focus is how do we not have this waste in the first place. This is not something that can be fixed by edict, or by better IT (information technology),” Shakman said. “It is something that requires behavior change.”

So Lean Path developed a smart phone app to try to change behavior.  When companies or individuals are aware of the amount of food waste they are responsible for and at what point in the food production stream it occurs, then they are motivated to take steps to cut waste.

Growing awareness of the problem is beginning to reap results.

Some waste is simply what is trimmed off of meat or vegetables at restaurants and grocery stores to make the food present well on plates or in packages. Other waste is actual spoilage from over production of food. Then there is post consumer waste that eaters leave on plates.

Both the U.N and the US government’s USDA and EPA brought attention to the problem this fall, letting companies, schools and consumers know of their goals to cut food waste in half by 2030.  That goal is among the UN’s Sustainable Development Goals.

Food waste is a money loser for groceries and supermarket chains. As consumers have come to expect a range of fruit and vegetables in any season, the loss of non-cosmetic and too ripe to sell food has escalated because of the shipping.

Safeway is one chain that has been on a campaign to cut food waste, donate more of its excess food, and convert some food waste to energy.

Chris Ratto, director of sustainability for Safeway/Albertson stores, said the chain gives away 62 million to 72 million pounds of food a year to soup kitchens and hunger relief pantries from perfectly good food that is not aesthetically fit for store shelves. Often it is the food containers rather than the food that has lost aesthetic appeal, such as boxes that are squished or cans with ripped labels, he noted.

But Safeway is also experimenting with ways to turn food waste into fuel.  It has installed bio-waste digesters next to some of its facilities to turn food scraps to biofuel which is then used by the delivery trucks at those sites.

“We’re looking at (purchasing) trucks that can haul food to stores but runs on methane gas,” Ratto said.  Safeway would put digesters onsite at distribution centers, say, so that in theory the food waste could go immediately into production of energy and then used as fuel for the trucks that distribute food from that center.

At the city level

MissionPoint Capital Partners, an impact investment firm, has sought to build collaboration among municipalities, business, pastors, and NGOs and find opportunities for how excess food can be put to good use feeding people.

That work involves the efficient logistics of procuring food before it rots. Getting the fruit that is not attractive but still fresh from grocery stores or even distributors and bringing the fruit to pantries has been a challenge throughout the food industry that has kept more food donations from happening.

“We look at where there are opportunities to fill gaps,“ said Sarah Vared, an associate at MissionPoint.

Donating excess food or food nearing its best sell by dates has become easier since Congress passed the Bill Emerson Good Samaritan Food Donation Act that reduces donors' liability for donations of food and groceries. But some restaurants and food establishments are not aware of this law.

The U.S. Department of Agriculture's announced goal for the U.S. to cut food waste 50 percent has served mostly as a consciousness builder that food waste is an issue.

Armed with that awareness, food companies, hotels, university campuses, sports stadiums – places that prepare a lot of food and could generate a lot of waste — have participated in efforts, including USDA efforts, to reduce waste and to divert unused food to the hungry.

A way out of food waste: Upcycle food to hunger relief