Reflections on the Season: Gratitude is the Best Attitude

Greenbuild usually has a couple of blowout parties before the final day and after cruising the USGBC's most-excellent party at the Merchandise Mart, I headed over to the Green Umbrella Group party held at a local club.

After a couple of hours of vodka-infused dancing, I looked out over the couple hundred people on the dance floor of all sizes, shapes, colors, ages and had this thought:

It wouldn't be Thanksgiving without thanks and there is so much for which to be thankful.

Naturally, my gratitude begins with my family: my muse and inspiration, Peg, and my amazing son, Max, who is everything I wasn't at his age. I'm thankful that I didn't die last summer in the cardiac intensive care ward with a heart rate of 27, the result of second-stage Lyme disease. 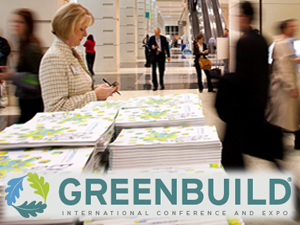 I'm also thankful for having rediscovered yoga, which keeps my body strong and head on straight. I'm thankful for being a part of something much bigger than myself: being with 30,000 compatriots at Greenbuild and realizing that several times that number would have liked to have been there, but were not able to make it. Sharing hugs with old friends who have been in the trenches for decades. Witnessing the enthusiasm, energy, and knowledge of the emerging green builders -- I did not know a fraction of what these guys know when I was their age, and that is really, really cool.

Those of you who were at Greenbuild in 2007 may remember how Chicago rescued USGBC from the perfidy and betrayal of the Los Angeles Conference Center -- and the chaos of the last-minute squeezing of a bigger-than-expected show into half of this year's space at the McCormick Center. Those at the conference last week got to see Chicago demonstrate that it really knows how to put on a show when it is prepared. Things were so seamless at Greenbuild it was like driving in a Prius: No sound and smooth as silk.

For me, this year's Greenbuild was quite different from previous years: I wasn't coming into this introvert's nightmare already tired out from three days of USGBC board events. I got to spend a lot of time on the show room floor and, with 1,800 exhibitors, it was quite overwhelming, but in a good way. GreenBiz Group's Leslie Guevarra and staff posted a series of blogs highlighting some of the most interesting products on the showroom floor (further GreenerBuildings.com coverage is available here) and USA Today even had a reporter covering the show and blogging on it.

I also got to attend more sessions. It was very exciting to see all of the data being gathered about the performance of LEED buildings through the Building Performance Partnership and privately initiated and funded research, which we will discuss below.  At the closing plenary, I was inspired by the leadership of Chicago Mayor Richard Daley who put Chicago in a position of global green leadership, the commitment of Housing and Urban Development Secretary Dan Donovan and by all of the USGBC Leadership Award winners, including my hero Ray Anderson and another hero (but not a leadership award winner … yet) Paul Hawken.

This week's Look-Grandpa-I-picked-up-the-$20-bill-you-said-was-fake-but-it's-real! award goes to CB Richard Ellis, University of San Diego and McGraw-Hill, for their important contribution to green building knowledge.

The survey found that larger, publicly traded and nonprofit companies tended to opt for certification over private non-traded entities. In terms of average rental rate, the non-LEED buildings were nearly 5 percent below the market average, while the LEED buildings were well over 7 percent above the market average, demonstrating the clear economic advantage of the green building label.

In addition to evaluating the green building performance of these properties, nearly 600 tenants -- from office managers to occupants -- were interviewed to gauge their satisfaction with the performance of the building, whether green or not. Of the buildings evaluated, just over half were certified to LEED while the rest were either in process of certification (10 percent) or not certified but considered "green" due to the presence of energy saving, water saving and indoor environmental parameters. Generally, the occupants expressed high satisfaction with such features as access to daylight and views, good indoor air quality and other environmental programs. But the survey found that there was little difference between the LEED buildings and the non-LEED buildings in terms of these various features.

Why solar is on the VERGE of a breakthrough

Next-Gen Buildings: Too smart to fail or too busy to think?

See all by Rob Watson