Is regenerative agriculture the answer to the guilt-free burger?

Properly managed cows are part of the suite of agricultural practices that captures and stores carbon in plants and soils.

In sustainability circles familiar with programs such as Meatless Monday and author Michael Pollan’s often quoted words — "Eat food, not too much, mostly plants" — the message to eat less meat is a known adage. The recent update on dietary guidelines from medical journal Lancet reinforces this message and stresses that agriculture accounts for roughly a quarter of all greenhouse gas (GHG) emissions, most produced by raising of cattle and lamb.

In early April, the Grassfed Exchange conference provided a different message, that restorative or regenerative agriculture — which includes grass-fed, pasture-raised beef — is part of the solution to climate change. I must confess that my body craves a good hamburger every once in a while, and when I indulge this craving, I often feel a twinge of guilt. Last weekend, when I ordered a Marin Sun Farms grass-fed, pasture-raised burger, here are three reasons why I didn’t feel guilty:

As I walked up to the entrance of the Grassfed Exchange conference in Santa Rosa, California, I was struck by the sea of cowboy hats waiting to board the buses for the tours of local Sonoma ranches and dairies. Personally, I was drawn to the conference’s title "Regeneration Rising" and the opportunity to tour two local Sonoma dairies. I was struck by how passionate the ranchers and dairy families I met are about their businesses.

The dairies we visited, and the ranchers I met, are practicing restorative agricultural practices such as carbon farming, which the Sonoma County Farm Bureau defines as "a suite of agricultural practices that captures and stores carbon in plants and soils, while reducing greenhouse gas emissions." The key practices include applying compost on fields, rotational grazing, riparian restoration and range planting.

Regenerative agriculture, according to Regeneration International, aims to boost microbial activity, carbon retention and water infiltration in soil. Edible Silicon Valley explains, "Regenerative ranching mimics how ruminants, or grass-eating animals, lived in the wild before industrialized ranching took hold. Instead of keeping cattle fenced in on grasslands to eat new growth down to the nubs, regenerative ranchers move animals regularly to avoid the overgrazing that damages pastureland."

It’s all about the soil

George McClelland, one of the owners of McClelland’s Dairy, an organic family farm and dairy that is part of the Organic Valley cooperative, drove home a key principle of restorative agriculture — it's about the soil.

McClelland and his family spoke passionately about their worms, soil microbiome, increased biodiversity and the carbon benefits of well-managed cattle. The decision to go organic and embrace carbon-beneficial practices, such as compost application and rotational grazing, has kept the dairy in business. It has completed a Carbon Farm Plan and is part of the Healthy Soils Program, which supports farmers and ranchers who adopt management practices that reduce greenhouse gas emissions and increase carbon sequestration in soil and plants.

Keynote speaker Charles Massy, farmer and author, stressed that industrial agriculture is a major player in destabilizing the system and regenerative agriculture has the ability to reduce carbon and increase biodiversity. He referred to Gabe Brown's book "Dirt to Soil: One Family's Journey into Regenerative Agriculture," for those interested in learning more about soil health. (You can read an excerpt of Brown's book on GreenBiz Reads.)

Regenerative agriculture is part of the solution to climate change

A consistent theme of the conference was that well-managed cattle can sequester carbon. Project Drawdown supports this wisdom. It identifies regenerative agriculture as solution No. 11 to climate change —  "bringing carbon back home through regenerative agriculture is one of the greatest opportunities to address human and climate health, along with the financial well-being of farmers."

Doniga Markegard, who runs The Markegard Family Grass-Fed ranch with her husband, spoke about why properly managed cattle is a sustainable form of agriculture that "builds soil, sequesters carbon, captures and purifies water and increases biodiversity."

She is working to scale grass-fed beef. "We are losing the propaganda war," warned Markegard, who is concerned that the "plant forward" movement story is overshadowing the importance of properly managed livestock. The benefits, according to Markegard, include "sequestering carbon and increasing biodiversity." 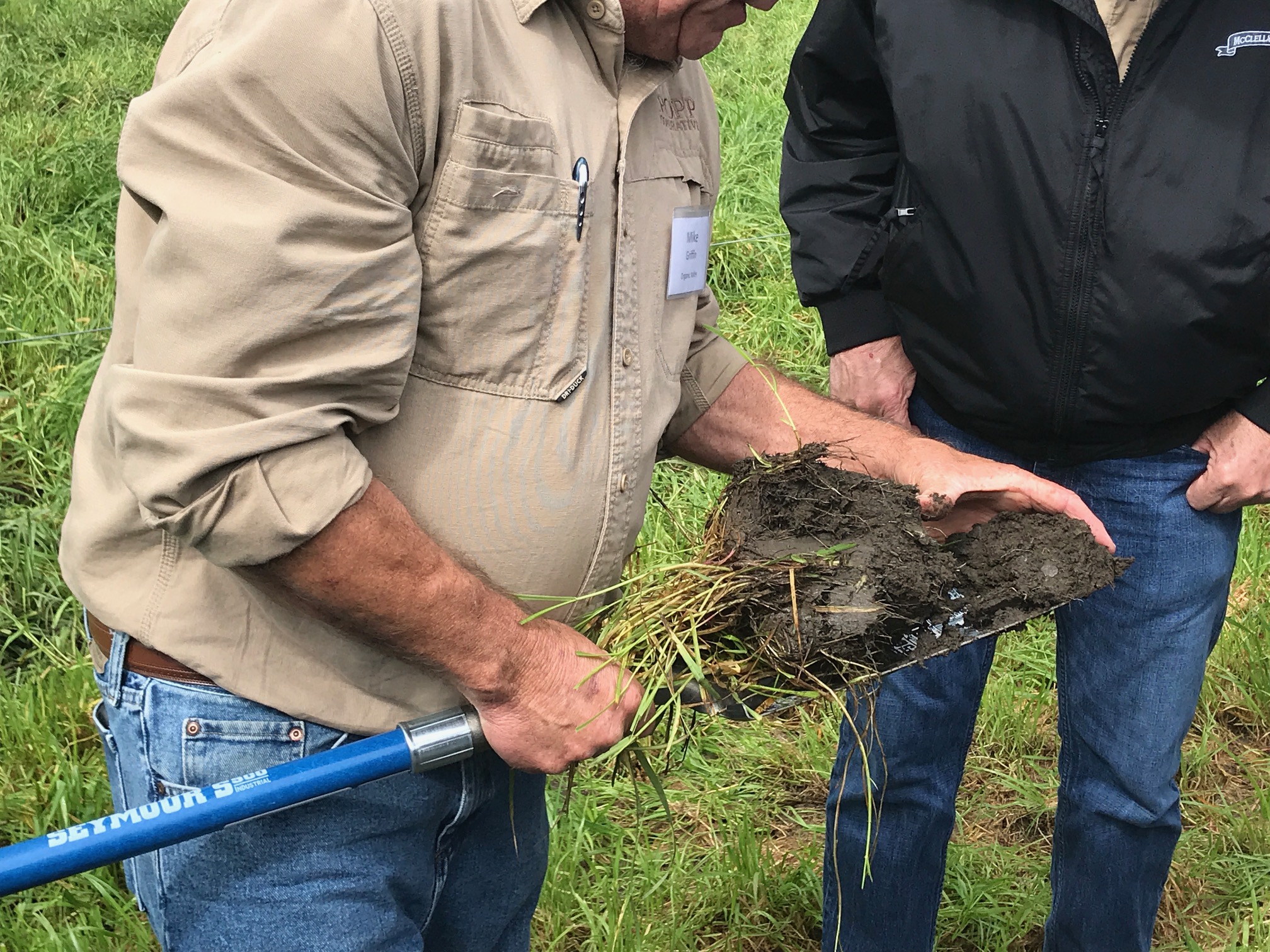 The same week of the conference, Burger King announced it would offer an Impossible Burger, a meatless, vegetarian patty from the startup Impossible Foods, raising concern that this venture capital-backed company with a big marketing budget is winning the battle of the burgers.

Speakers at the conference cited a new study from Michigan State University that suggests that if cattle are managed in a certain way during the finishing phase, grass-fed beef can be carbon-negative in the short term and carbon-neutral in the long term.

The study looks at the entire lifecycle and found that well-managed cattle on grass produced a net carbon sink. The key to these results is adaptive multi-paddock (AMP) grazing that can improve animal and forage productivity, and sequester more soil organic carbon (SOC) than continuous grazing. (The term soil organic SOC is a metric for tracking carbon sequestration in soil.)

More science is behind these claims. One tour took participants to Loren Poncia's Stemple Creek Ranch, where he practices restorative agriculture practices, such as rotational grazing, compost application and riparian restoration. "We found a clear correlation between the addition of manure to the soil system and an increase in carbon numbers," explained Jeff Creque, director at the Carbon Cycle Institute, a key player in the carbon farming movement.

One thing that struck me during the tours is how much work it is keeping happy cows happy. I was also struck by the threat to our beloved open spaces should the remaining Bay Area working lands go out of business, leaving them vulnerable to becoming a sea of estate homes and vineyards.

The iconic green pastures scattered with happy cows could be a thing of the past if consumers and businesses don’t educate themselves about why paying a premium for restorative agriculture products delivers big benefits: reduced carbon emissions; increased biodiversity; healthier soils; and economically viable working lands.

See all by Deborah Fleischer