Money is the prime mover for a meaningful response to the climate crisis at scale.

Climate change is making its presence felt around the world. In just the last few weeks, wildfires have scorched California, and two hurricanes slammed into the Gulf Coast. Meanwhile, scientists know that our warming world is pushing animals and their viruses closer to humans, making it unlikely that the current pandemic will be our last. If we stay on our present course, things will only get worse.

Against this backdrop, Climate Week NYC 2020 is fast approaching. The annual September event is meant to focus global business and government executives on our situation’s direness. For environmentalists and anyone who cares about our collective future, now is the time for hard truths.

We all must push these leaders to shift climate action into the next gear. And there’s only one way to do that. Whether we environmentalists like it or not, money is the prime mover for a meaningful response at scale. If we’re serious about minimizing the damage from a warming world, we must align market incentives with more environmentally responsible decision-making.

Toward this goal, we should applaud Morgan Stanley for its decision in late July to be the first U.S. bank to disclose how much its loans and investments contribute to greenhouse gas emissions.

Their announcement is another indicator that things are changing in the world of finance. It comes directly after the European Central Bank saying it will pursue climate-conscious accounting and investment — the first central bank to do so.

Morgan Stanley is leveraging more than $0.5 trillion in assets under management to incentivize change. Its initiative raises the chances that executives will consider corporate climate action a "must-have" strategy to attract investors. It also will help move such efforts from a rubric in an ESG statement to a central position in annual reports and corporate decision-making.

There remains considerable leeway for this announcement to end up as a feel-good business story that doesn't translate into the meaningful action we need.

The bank’s effort comes by way of joining the Partnership for Carbon Accounting Financials (PCAF), an organization developing a global accounting standard that institutions can use to measure and reduce their climate emissions and impact.

As an example of the tangle, many large companies use internal metrics to assess climate impacts. Some, such as Microsoft and Swiss Re, calculate an internal carbon fee on their activities and invest those fees in accelerating their transition to greener technologies. Others use shadow pricing to assess their projects’ carbon costs under potential regulatory scenarios. And different organizations price carbon differently. LVMH’s luxury brands contribute $13.50 per metric ton of carbon emitted to finance innovative sustainability projects. Unilever’s Ben and Jerry’s ice cream brand, meanwhile, uses a $10-per-metric-ton carbon fee.

If Morgan Stanley’s move heralds a sea change in accounting practices, it is still only one step in the right direction. There remains considerable leeway for this announcement to end up as a feel-good business story that doesn't translate into the meaningful action we need. Sure, emissions reporting will help investors see their money's impact, but how does that connect to stock prices, dividends and ROI — everything that investors genuinely care about? Right now, it doesn’t.

We must link disclosure with price signals.

It is nice to hope that the market will implement carbon-risk pricing on its own and that carbon-intensive industries will see the consequences of inaction in their share prices and profits. This is what’s behind the idea of portfolio decarbonization. Stock markets have not yet priced carbon risk into carbon-intensive industries, which should experience a downturn when such risk gets factored in.

But the data are not entirely backing up this notion. In 2019, researchers studied 36 publicly traded large emitters and related sector indices in Europe and North America before and after major climate protocols were brought online to increase these companies’ carbon risks. Only nine showed any detectible carbon-pricing signal to investors.

Here’s the reality: Investors are largely unmoved by this risk. Sure, many say they want to combat climate change. And they also see that consumer choice is bending toward sustainability. Yet, more than 45 percent of American investors say they are primarily looking for return rates in an investment.

Beyond socially conscious investment — where lower return rates might be acceptable — a market-driven shift out of high-emission business operations will happen only if carbon-intensive industries provide weaker returns that make them dispensable to portfolio managers. There is no doubt that many investors are moving towards a decarbonized portfolio. But as long as there remains a market for products generated by heavy emitter industries, many will continue to invest in them.

An index that holds emitters accountable

Banks and investors need to make the critical next step — connecting emissions disclosures to instruments and policies that drive real shareholder value. For these tools to work, they must push the negative externality inherent in emissions production onto the producers and shareholders who directly benefit from it.

The market can help investors decide how to value companies that reduce emissions by factoring their climate impacts directly into pricing. Despite a warming attitude to planet-friendly investments, cold capitalist calculations still rule on Wall Street. Creating shareholder value and acting with fiduciary responsibility are established drivers. These must be at the center of a carbon-pricing mechanism. A benchmarked carbon emissions index can be created for publicly traded companies as part of a strategy to achieve this goal. While measures could include various factors such as plastic packaging use or renewable energy investment, there must be consistency and transparency.

Under this scenario, each company receives a rating. This metric would allow investors to trade within the index where financial and carbon data come together in a combined performance rating. Strong performance on both measurements would make companies attractive to investors looking to minimize their climate impact.

Some may see a similarity between this idea and other green indices such as the Dow Jones Sustainability Index (DJSI), which identifies companies based on a corporate sustainability assessment that includes environmental and social justice elements. The DJSI uses a total sustainability score based on complex measurements and criteria.

The index proposed here would measure only carbon emissions and doesn’t require a carbon tax to implement. Companies can be removed from or included on the index based on performance. Developing this benchmark will not be simple, but Morgan Stanley’s and PCAF’s efforts show how to define standard indicators.

An essential premise of this effort is that the market should reward companies that reduce carbon emissions and mitigate climate change. Equally, investors also should reap benefits for directing funds toward more conscientious businesses. Giving investors a break in their capital gains taxes related to share-trading in NASDAQ Green companies would be sufficient to attract investment. Of course, government regulators would need to accept this approach. But because so many governments worldwide are grappling with finding market-based climate change solutions, this approach offers a relatively straightforward answer.

Companies, particularly those involved in finance, insurance and pensions, must start pricing carbon risk correctly into their asset allocations. Some argue for a carbon tax to help markets achieve this goal. Others claim this approach would be insufficient as a mitigation tool and instead advocate for a complete overhaul of the financial system. But such drastic moves would trigger significant disruptions and are unlikely to materialize any time soon.

Climate-impact reporting lacks the specificity and teeth to do what needs to be done to mitigate the global threat. We should all applaud Morgan Stanley for taking a big step in the right direction. But the markets and regulators must find more direct ways to create the mechanisms that align and link market forces with emissions reductions. 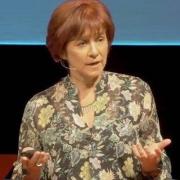 See all by Deborah Brosnan