This year Americans filled out an estimated 70 million brackets for the NCAA’s men’s college basketball tournament. And every year, family, friends and work colleagues look for the secret formula to completing the winning bracket.

The President of the United States likes to weigh in, and last year Warren Buffett even offered $1 billion to the person who completed a perfect bracket. (Just one day into the tournament, a full 99 percent of CBS and ESPN brackets already were busted.)

Although no one has picked a perfect bracket, there is no shortage of strategies (such as those here, here, here and here) that could help gain an edge.

We at RMI have a strategy, too: going all in on renewable energy.

After the tournament bracket was released, we collected data on the renewable energy portfolio of the utility serving the main campus of each school playing in the tournament.

How we made our picks

Almost immediately in our analysis, we were presented with a challenge: how to rank the teams — and the utilities that power them — based on renewable energy. Which types of renewables to include or exclude? Did renewable energy credits (RECs) count? Rank by installed capacity or actual energy generation? How to account for on-site generation not included in utility portfolios? And the list of questions went on. 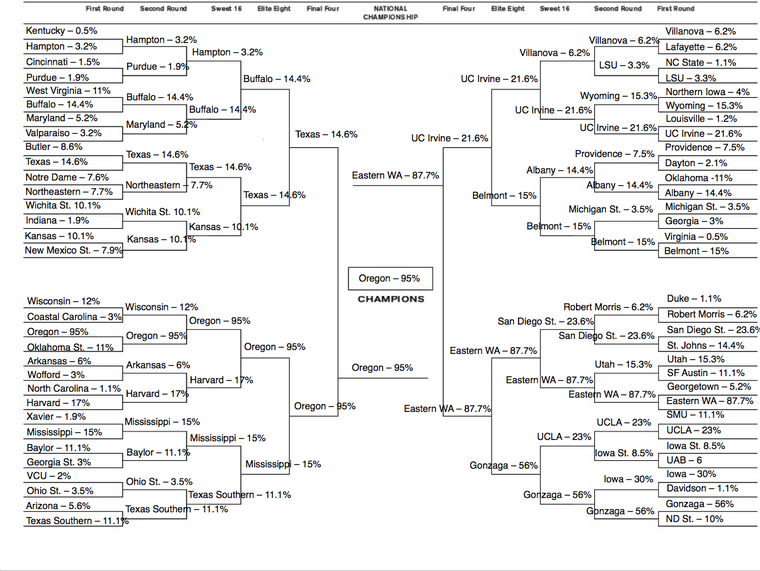 Despite having a number of industry-savvy staff on RMI’s roster, it proved surprisingly difficult to find renewables data for many utilities. Sure, the release of the brackets Sunday only provided us with a little more than three days to review utility resource portfolios for 68 teams.

But it’s startling how detailed stats for the Naismith Award finalists — and pretty much any other collegiate basketball player — are readily available at the click of a button, yet basic renewables stats are comparatively buried. Many customers likely would have great difficulty parsing through utility integrated resource plans and renewable portfolio standard compliance reports, to say nothing of the difficulty of navigating many utility websites.

Amidst that sea of plans and reports, we applaud two approaches in Texas: the "Electricity Facts Label" (PDF) used by many competitive retailers, as well as the detailed transparency in the corporate reports provided by municipal utility Austin Energy.

Our bracket picks reveal a tournament outcome that not even ESPN Bracketologist Joe Lunardi could envision:

The 2015 Final Four will be played at Lucas Oil Stadium in Indianapolis, Ind. (when will Lucas Oil Stadium add on-site renewables like Wells Fargo Arena at Arizona State University? NRDC offers a nice guide to help stadiums add solar). Although five teams from Indiana qualified for this year’s tournament, none are represented in our Final Four picks.

And our choice for the ultimate winner? The University of Oregon Ducks.

Now we’ll watch and wait — with the rest of the country — to see how March Madness really unfolds. In truth, the probability of our Final Four picks actually making it to the Final Four was very low: Texas (2 percent), Oregon (1 percent), UC-Irvine (less than 1 percent), and Eastern Washington (less than 1 percent). (Editor's note: Three teams did not advance from the opening round, and the one that did — Oregon — was defeated Thursday in the Sweet 16.)

But that doesn’t take away from the high percentage of clean energy powering their campuses. They’re our picks, and we’re standing behind them. Renewable energy is a winning proposition — for the electricity grid, if not on the basketball court.

This article originally appeared in the Rocky Mountain Institute

Electric Vehicles: A March to Madness?

A greener Saints team marches into the Superdome