A funny thing happened on the way to the bank for the solar and wind industries. The erstwhile "alternative" energy that turned off traditional investors as too risky is now attracting traditional financing — piles of it.

As commercial customers and utilities take up solar and wind projects in big numbers, banks and even pension funds and mutual funds are increasingly seeking to finance these projects.

The Climate Bonds Initiative reported that in just the past six months, the issuance of green bonds nearly has met the full-year total for 2015, which means 2016 is on track to double last year's total. Specifically, by mid-July $38.43 billion worth have been issued, which compares to $41.8 billion for all of 2015.

The organization cited "a huge demand for green bonds with most of the issues oversubscribed," and from a range of investor types. They include "mainstream institutional investors: Aviva, BlackRock, State Street," as well as specialty environment-focused investment funds, corporate treasuries such as Barclays and Apple, sovereign and municipal governments and retail investors.

Pure energy plays accounted for about one-fifth of the bonds yet the majority were linked to renewable energy projects. 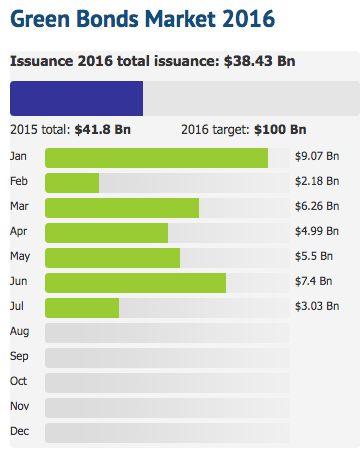 At last week’s Intersolar industry trade show in San Francisco, solar engineering companies described very strong demand from banks asking for third party due diligence and analysis of projects they wanted to finance. Solar as well as solar plus storage projects were getting keen interest.

"In the early phases of any technology, systems are typically funded by cash sales or equity investors or research grants, but as industry matures then the financing industry gets interested in putting money into the projects because they like to make money," said Terence Schuyler, principal consultant in Energy Advisory services for DNV GL. He described a very brisk business in DNV GL providing the engineering analysis and due diligence for solar and solar-plus-storage projects.

His colleague Michael Kleinberg, a senior consultant, added: "Energy storage is becoming bankable because it is becoming technology that is able to produce reliable returns that investors can count on," especially when combined with solar because it solves solar's intermitancy problem.  "Solar-plus-storage is one of those interesting technologies where they can produce more together than either one on its own," he said.

As GreenBiz has reported, Bank of America, Wells Fargo, Citi and Goldman Sachs are just some of the banks with large lending portfolios for renewable power generation.

And Bloomberg New Energy Finance analyst Ethan Zindler in June said that Bloomberg is tracking increasing interest by pension funds and mutual funds in putting money into large-scale operating solar and wind projects. This is providing a pool of money heretofore unavailable for renewable electricity generation projects, he said.

"So the exciting thing we starting to see a little bit more of is pension funds trying to invest directly into projects or portfolios of projects," Zindler told GreenBiz. "That is where things start to get very exciting because those are very, very big pools of capital, much larger on a total basis than the volumes of capitals we’ve seen invested so far."

To be sure, pension and mutual funds still don’t invest in startups and new projects because of perceived risk in a startup, he said. But these funds are investing in already operating, already profitable projects, replacing the early-stage investments that got such projects started.

Pension funds are open to investing in things that produce long-term, steady, reliable returns — such as an operating long-term solar or wind project that has a long-term operating contract that is going to get paid as long as it produces electricity.

"Grandma’s pension fund does not want to be investing in very risky stocks that go up and down and have volatility but those kind of pension funds are open to investing in things that produce long-term, steady, reliable returns — such as an operating a long-term solar or wind project that has a long-term operating contract that is going to get paid as long as it produces electricity," Zindler said.

All this is providing hope that the trillions of investment needed in low carbon projects and zero emissions energy generation for the world to meet its Paris Accord commitment of keeping global temperatures below 2 degrees Celsius might be within reach.

In fact, Bloomberg forecast last month that two-thirds of all new electric power generation between now and 2040 will be renewable. Its June 16 New Energy Outlook predicted: "Wind and solar will account for 64 percent of the 8.5 TW (terawatts) of new power generating capacity added worldwide over the next 25 years, and for almost 60 percent of the $11.4 trillion invested."

That translates to $7.8 trillion that will be invested in renewable electric power generation between now and 2040, Bloomberg found.

It will be driven largely by cost as wind and solar "become the cheapest ways of producing electricity in many countries during the 2020s and in most of the world in the 2030s."

But even that huge number is not enough for the world to meet the goal of the Paris Accord to prevent global temperatures from climbing 2 degrees Celsius or more. Reaching that goal, Bloomberg calculated, would require $12 trillion in renewable electric generation projects.

That is where things start to get very exciting because those are very, very big pools of capital.

In its June forecast, Bloomberg also reported that a record $348.5 billion was invested in renewable energy electricity projects last year — revising upward its estimate of an already significant $330 billion invested in 2015.

Paradoxically — even as 2015 total renewable electricity generation investment is off the charts and traditional pension funds and mainstream banks move to finance utility-scale and big commercial solar and wind projects — Bloomberg also reported that so far in 2016 global investment in renewables trails last year significantly. That level is 23 pecent below totals at the midpoint of last year, even as solar installations hit another record high. Solar installations in the US alone hit 8 gigawatts so far this year and the Solar Energy Industries Association expects 14 gigawatts will be installed by year end.

Bloomberg ascribed the drop both to cheaper solar equipment prices and China's pulling back on infrastructure investment as energy demand softens with its slower economy.

"Cheaper photovoltaic panels and lower financing costs have reduced capital spending needs of developers even as installations of the technology have hit a record," Bloomberg reported.

China's investment in renewables fell 34 percent in the first half of this year, Bloomberg figured, as demand for energy softened and government policies changed.

REC Solar said it will structure and vet power purchase agreements and provide financing for mid-size solar projects using $225 million renewable energy fund that Duke Energy set up as part of its acquisition of the company.

Ryan Stepp, a sales director at REC Solar, told GreenBiz that his company is "unlocking an entire market segment" in performing due diligence to vet and finance projects in the 50- to 500-kilowatt range that, until recently, have been outside the focus of lenders and bond investors.

He said these projects are "too small for the big guys," such as green bonds investors and utility debt funders —  and "too big for the little guys" that invest in individual projects for equity. But he acknowledged that more investors are interested than in the recent past.

At Intersolar, REC Solar was getting positive inquiries from all sides of the industry, he said — adding that REC Solar and Duke would consider financing deals across the U.S. (outside of Duke's service territory). 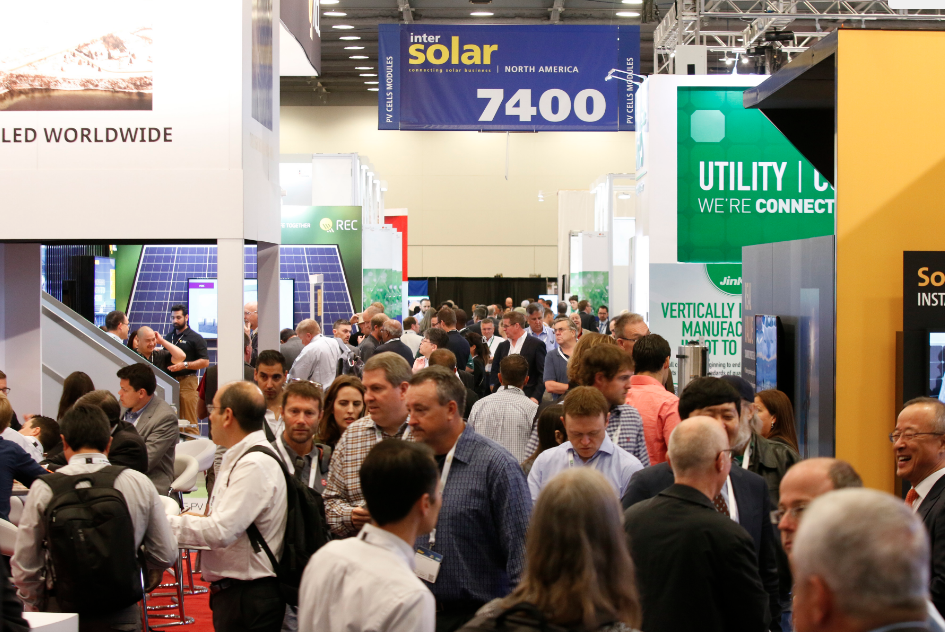