Report Report: So, COP21 happened — what next?

Going on three months after a historic international climate change agreement, the jury still is out on what exactly its significance will in the fight against climate change, or the future of sustainable business.

Some, including Al Gore’s Climate Reality Project, have called the agreement a "turning point," which sends a clear signal to markets and investors that the future of energy is in renewables such as wind and solar. Indeed, a low-carbon economy would be a boon to renewables, energy storage and the IT sector, among others.

But, with the COP21 agreement having so many moving parts, could it be premature to declare victory? What will it mean for business? Here are some of the most notable reports that strive to get at what comes next after the Paris agreement:

Mapping the Gap: The Road from Paris 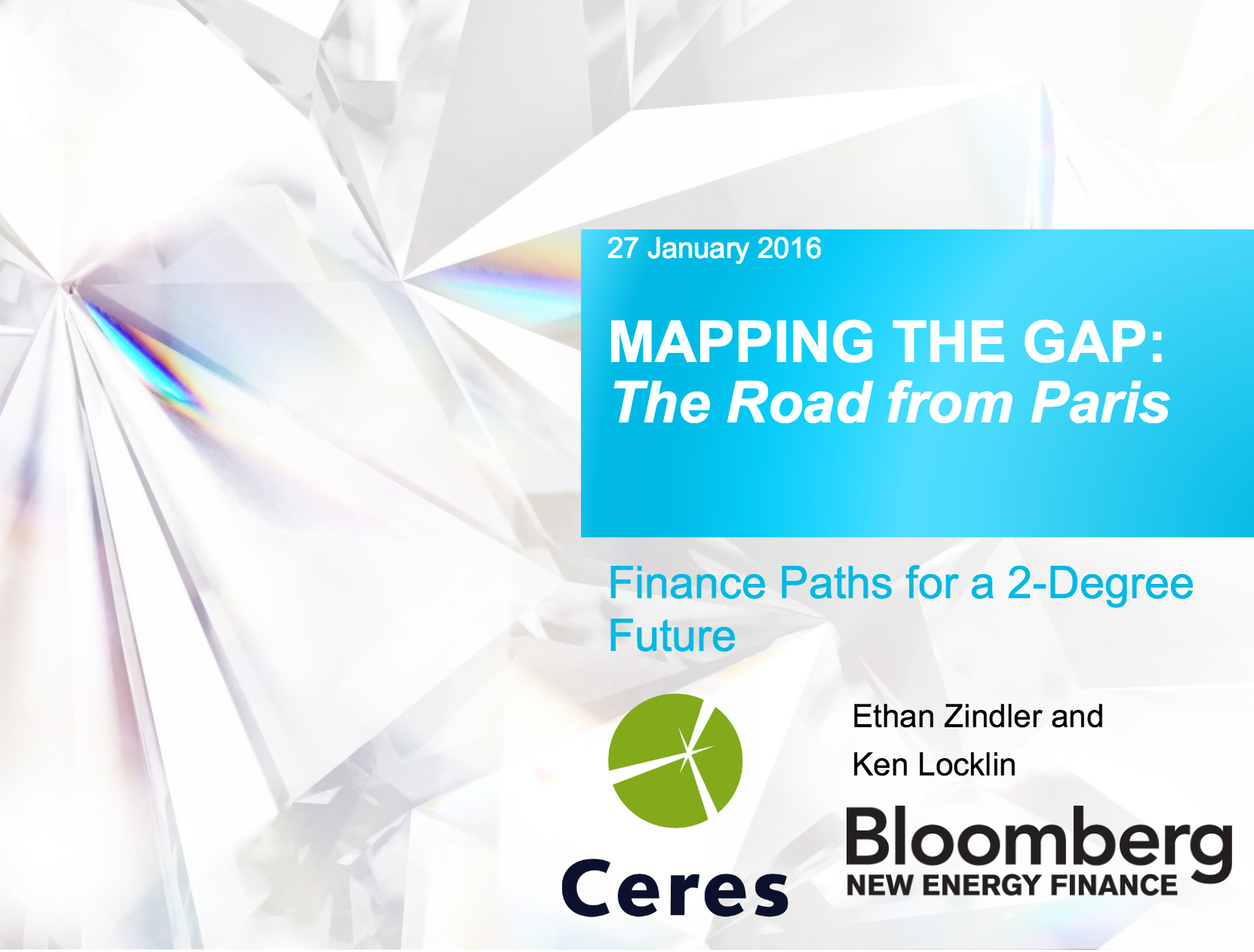 Assuming that the world seeks to "lock in" carbon dioxide reduction benefits earlier that will pay dividends in critically needed carbon pollution reductions over the longer term, Bloomberg Energy Finance anticipates a sharp ramp up in overall investment into lower-carbon technologies over the next decade.

It’s no secret that some of the biggest business opportunities for low carbon technologies exist in the developing countries of the global South. Global demand for electricity is expected to grow by 56 percent between 2010 and 2040, with most of this coming from developing countries — where strong economic growth is driving demand.

With many of these regions filled with communities living off-grid, there is a huge market opportunity for small-scale solar and wind technologies, microgrids and energy efficiency innovations. And this also offers hope to increase energy access to the 1.1 billion people currently living without reliable access to electricity, which would improve economic prospects and help alleviate some longstanding social and environmental issues. 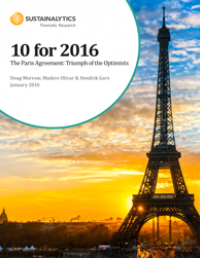 The Paris Agreement and follow-up national climate commitments are expected to serve as a positive long-term economic signal for low-carbon technologies. While current INDC targets are forecasted to limit the increase in global temperatures to 2.7 degrees Celsius — well above the 2 C pathway — countries’ future pledges must be progressively ambitious and may close some of this gap.

"While the Paris agreement may pose a long-term structural challenge for oil, gas and coal companies, it is far too early to herald the end of fossil fuels. … We expect the deal and the follow-up emissions reduction initiatives implemented by countries will serve as a positive economic signal for low-carbon technologies."

The report details 10 companies that are "getting ahead of the climate change curve," including Tesla, Cisco, Kellogg and L’Oreal, which offer investors unique ways to play the regulatory, market and physical impacts of climate change.

The cautiously optimistic approach this report takes to the post-COP21 world does a good job of balancing the business opportunities offered by a low-carbon world with the reality that the Paris Agreement doesn’t mean the fossil fuel industry will go quietly into the night.

The 10 companies highlighted shows the diversity of approaches that may be taken by companies to address the myriad challenges posed by climate change. Tesla, Borregaard and Cisco are developing products that are likely to thrive as emissions regulations tighten. The story on Kellogg shows how food companies can minimize their exposure to the physical risks of climate change by setting aggressive emissions reduction targets and pushing adaptation strategies through their supply chains.

Another important point raised by this report is that institutional investors are increasingly contemplating the extent to which their investment decisions may be contributing to systemic risks related to climate change and are redefining their role as more forceful stewards of their investments.

Corporate Disruptors: How business is turning the world’s greatest challenges into opportunities 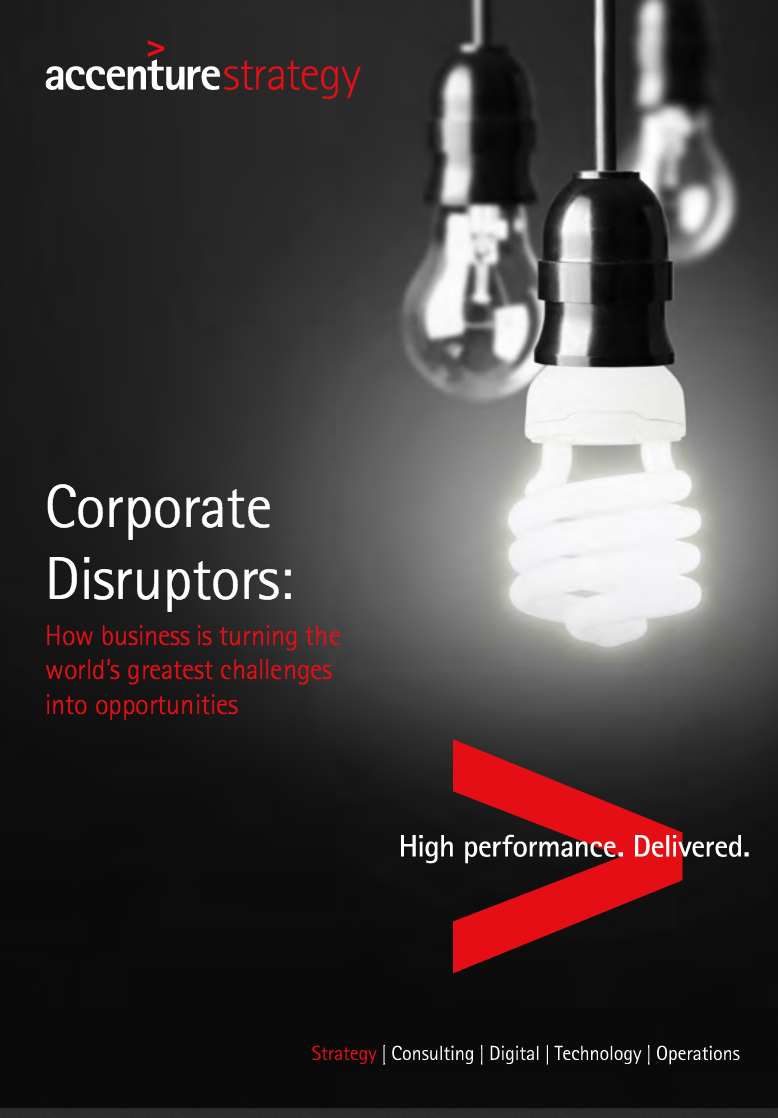 Shifting patterns of global growth — particularly in emerging economies — are making customers a "moving target." Demographic changes are affecting both the consumer and labor markets, posing big challenges for customer and talent acquisition and retention. In addition, digitally empowered consumers have higher expectations than ever, and are holding companies that do not meet them accountable. Enormous business potential exists in the data companies collect, but pressure is increasing to be much more vigilant in how that data is secured and used.

"The implications for businesses are significant: With these changes fundamentally redefining the rules of the game, companies increasingly recognize they must take a deeper look at what this new day dawning means for them and how they should respond."

It is well-understood that the next few decades will see significant shifts in consumer demand, buying power and expectations, driven by massive population migrations and widespread information availability. Meanwhile, an increasingly resource-constrained world will be forced to deal with decades of unchained growth and unsustainable consumption of natural resources.

Digital technology has a big role to play in the future of sustainable business — both as a means of maximizing resource efficiency and for holding companies accountable for their actions. Information communication technologies could generate over $11 trillion in economic benefits per year by 2030, according to research by the Global e-Sustainability Initiative (GeSI) and Accenture. That is the equivalent of China’s annual GDP in 2015. 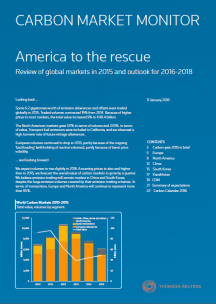 The world of carbon trading was characterized by two opposite trends in 2015: Volumes continued to contract and prices continued to increase. Traded volume dropped by 19 percent, from 7.6 Gt CO2 worth of transactions in 2014 to 6.2 Gt in 2015. However, due to higher prices in most markets, the total value increased 9 percent to $53.9 billion.

"Arguably the most interesting trend in 2015 was the rapid growth of carbon trading in the California/Quebec market known as Western Climate Initiative (WCI), and in the Regional Greenhouse Gas Initiative (RGGI) market that consists of a group of U.S. states. … Although still nowhere near European levels, North American carbon trading grew rapidly in 2015, when market volume increased from 472 Mt to 1,042 Mt (up 121 percent), and value increased by a full 220 percent to €10.6 billion [$11.8 billion]. North America now represents 17 percent of global volume and 22 percent of global turnover."

Despite warnings that adding transportation fuels to California’s cap and trade system would harm the market and hurt the state’s economy, the successful first auction in early 2015 showed that the Golden State’s economy wasn’t adversely impacted. As many as 449 companies complied with the expanded regulations, which included Chevron Products, ExxonMobil Oil, Phillips 66 and several refineries large and small. Analysts said the large participation could be a sign that industry is starting to accept the costs of doing business in a low-carbon economy..

The new growth of cap-and-trade in North American markets, and continued growth in Europe is an encouraging sign, which adds to the business case that climate change action won’t stifle business growth. In a post-COP 21 world, this will be key to helping to overcome the remaining political barriers to taking decisive action to promote a low-carbon economy and keep global temperatures at or below 2 degrees Celsius.