Companies need to shoot for the stars in thinking about resource productivity, according to a new report from McKinsey & Co. Fortunately, technology is presenting opportunities to do so.

“Rather than settling for historic resource-productivity improvement rates of one to two percentage points a year, leaders must deliver productivity gains of 50 percent or so every few years,” write Stefan Heck and Matt Rogers.

That’s a heavy lift: Between 2007 and 2013, annual U.S. nonfarm productivity grew just 1.6 percent. But, according to the report, "Are you ready for a resource revolution?" (PDF), that’s only a fraction of what’s possible. Indeed, according to Heck, a consulting professor at Stanford University and a McKinsey alumnus, and Rogers, formerly senior advisor to the Secretary of Energy and now a director in McKinsey’s San Francisco office, “The resource revolution represents the biggest business opportunity in a century.”

Rogers and Heck set out not only to reframe the crisis of resource scarcity into forcing function for the revitalization of our global economy, but also to provide managers a compelling road map for how to unlock and actualize that potential. They unpack a broad range of business approaches, contextualized in the practical frame of understanding how corporate leaders can, as they say, “integrate tomorrow’s new technologies, customers and ways of working with the realities of today’s legacy business environment.”

The foundation for their message is clear and compelling: that the underuse and chronic inefficiency which characterize our current state of the industry and operations are emblematic of the unprecedented opportunity we face to produce and manage natural resources far more creatively and intelligently.

Their case is based on three core premises: 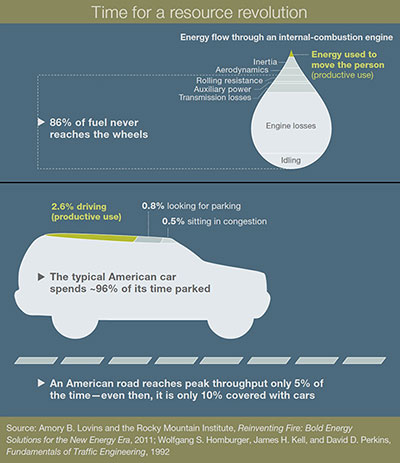 What does this look like in practice? According to Rogers and Heck, it means dramatic leaps in productivity — no more settling for historic improvement rates of one to two percentage points a year. We’re talking 10 times productivity gains, and that leaders of the new industrial era must deliver them at 50% increases every few years.

Not all of the opportunities are obvious, but many are clear. Take cars, for example: They are notoriously underused and inefficient. The typical American car spends about 96 percent of its time parked, and between looking for parking and sitting in congestion — combined with the inefficiency of internal combustion engines — 86 percent of the fuel never reaches the wheels.

It’s a similar story for utilities. Just 20 percent to 40 percent of the transmission and distribution capacity in the U.S. is in use at a given time, and only about 40 percent of the capacity of power plants. Both are compelling examples used to set up and frame the opportunity for radical optimization.

Heck and Rogers say businesses that capitalize most successfully on the resource revolution will employ five distinct approaches, either individually or in some combination. (Five are described in their new book, Resource Revolution; just three are detailed in the report.) The approaches, which rely largely on data, software and other smart technologies, include:

Much of this isn’t exactly new: turning products into services has been talked about for years; similarly, lean manufacturing and the circular economy are well-trod paths to efficiency. Nevertheless, Heck and Rogers put all of the pieces together in a compelling way.