Richard Branson Aims to Rock the Boat for Green Shipping

Look around you -- the furniture in your office or house, the electronics, the clothes you are wearing, mostly likely some of your dinner -- chances are these things moved by boat. About 85 percent of worldwide cargo travels by ship, and so it’s no surprise that shipping is a major contributor to climate change.

According to Richard Branson’s new NGO, which is called the Carbon War Room, the global shipping fleet is the equivalent on the sixth most polluting country in the world:

Annual CO2e emissions currently exceed one million tons and are projected to grow to 18 percent of all manmade CO2e emissions by 2050. Yet existing technology presents an opportunity for up to 75 percent gains in efficiency, with required investments repaid in just a few years. 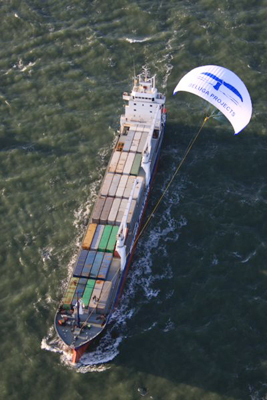 Fixing shipping will take bold ideas -- see the ship at left, which is equipped with a kite from a company called SkySails -- and it will take simple ones, like slowing ships down a little, adopting the equivalent of a 55 mph limit on the open seas. (See this New York Times story, which is literally about a slow boat to China.) And it will require bringing shipping companies, customers, regulators and others to work together to attack the problem.

Opportunities like these interest the Carbon War Room, which says its focus is to harness the power of business to bring about market-driven solutions to climate change.

“We believe that climate change is the greatest challenge facing humankind,” says Jigar Shah, the CEO of the Carbon War Room. “And we need a war room-like effort to combat it.”

I spoke recently with Jigar at the NGO’s new offices in downtown Washington. We’d met a couple of years ago, when he was running SunEdison, a solar industry startup, backed by Goldman Sachs, that was among the first to sell solar energy as a service (buy electricity, not PV panels), a business model that appealed to big customers including Wal-Mart. Jigar, who is 35, left SunEdison at the end of 2008 and became the top exec of Carbon War Room last June.

Our approach is to identify the barriers that are preventing market-based scale up of climate change solutions and thereby perpetuating the status quo. In addition to technology and policy gaps, these barriers include principal-agent problems, information gaps, and lack of common standards or metrics.

The Carbon War Room is also looking at building efficiency and seeking 10 cities to join in what Branson, speaking in Vancouver last month, called the Green Capital -- Global Challenge. It all sounds a little amorphous and vague, but the group -- which has only eight full-time staffers -- is working with others to drive change.

Its shipping campaign, for example, includes representatives from Sustainable Shipping, an online news and information portal, and the well-respected NGO Oceana, as well as Jonathon Porritt, a prominent UK environmentalist and author. They’re also working with RightShip, an Australian firm the has long vetted ships for safety and now offers environmental ratings as well.

“In shipping, there’s been an information gap,” Shah explains. “Companies that hired shipping services had no idea which were efficient and which were not.”

{related_content}That’s a problem because typically customers -- big companies like Rio Tinto, Cargill or Wal-Mart that ship vast amounts of stuff around -- pay fuel costs, according to Shah. So the owners of the ships have little incentive to invest their capital to improve efficiency.

Transparency is one way to stimulate change. Customers need to know which ships are most efficient. “We now have 160 companies that are using the data that we helped put together, and the impact has been huge,” Shah says.

Carbon War Room researchers have also identified more than 40 energy-saving technologies that they are sharing with the industry. Among them: low-friction paint that allows ships to glide through the water, more aerodynamic propeller designs and, of course, kites. SkySails, which is based in Germany, says a ship’s fuel costs can be cut by 10 to 35 percent by using wind power; its kites have been deployed by fishing trawlers as well as cargo ships.

“We’re working on technologies that currently save people money,” Shah says. “It’s far more straightforward and easier than trying to get governments to agree to binding targets in Copenhagen.” 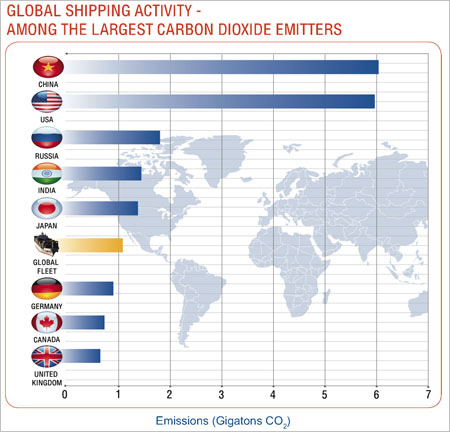