Cows, oil, the Tea Party and a true story of regenerating our land while slowing climate change.

Ranching is a rare occupation. Rarer still are the ranchers pioneering new ways to graze cattle, transforming their ranches and farms into vibrant ecosystems, producing black ink for their bank accounts and giving their incredibly robust animals a great life (with the exception of one bad day).

As you can see in our short film, "Soil Carbon Cowboys" (it’ll take you 12 minutes), AMP grazing helps ranchers regenerate their soils, with cascading benefits: More water soaks into and stays in the soil; soil microbes thrive; plant nutrition and production levels take off; and wildlife — from bugs to birds to large mammals — flocks to the ranches.

It’s a powerful story of how nature works — get the soils healthy, and the whole system rocks.

I’m fascinated with AMP grazing because of its potential to help slow climate change.

Those bustling plants and microbes need carbon to live; their storehouse of choice for carbon is atmospheric carbon dioxide (CO2). Via photosynthesis, plants suck CO2 out of the air, give us oxygen (O2) to breath and send carbon down through their roots to the microbes.

Simply put, there are three lengths of time carbon stays stored in the soil: days, decades and centuries.

This centuries-old carbon can have a great effect on climate change — if enough ranchers start practicing AMP grazing.

My idea: We know Shell and other oil companies are spending billions of dollars on Carbon Capture and Storage, or mechanical means to capture CO2 at the source of emissions. The CO2 is then compressed and pumped into emptied oil or gas deposits a mile (or so) below ground.

But what if these oil companies used their money to help ranchers transition to AMP grazing, and then shared in the credits for the carbon being stored in the soil? What if those soil carbon storage credits were cost effective for the oil companies to buy, while that same soil carbon increase helped the ranchers reduce operating costs due to a more robust ecosystem on their land, where nature takes the place of fertilizers, herbicides and pesticides?

What if we could close the loop on fossil fuel carbon? We use the energy, then return the carbon to the soil. 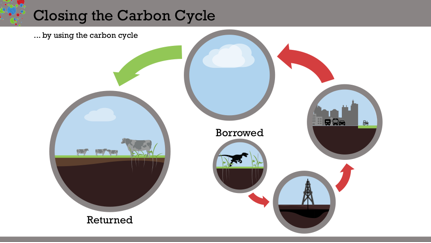 We got two grants from GameChanger. The first looks at potential business models for Shell (and other companies) that focus on soil health as a way to increase profits and reduce carbon intensity. We plan to release this research in the coming months.

The second grant is to actually measure the soil carbon on both AMP and conventionally grazed ranches to see if there’s a quantifiable difference in that long-term, centuries carbon being stored in the soils. This research is in progress, and we plan to publish in 2016.

That second grant is based on previous work done by Richard Teague of Texas A&M University. Teague studied a group of AMP and conventional ranches in North Texas. His 10-year study showed that the AMP grazers’ lands were accruing three tons of carbon per hectare per year more than their conventional neighbors.

There are 3.5 billion hectares of grazing land on earth. If — and this is a big if — we could store just one ton of additional carbon per hectare annually over all 3.5 billion hectares, then we would be able to draw down just about the same amount of carbon we emit each year that doesn’t get absorbed by the oceans, trees, plants and soils — nearly cancelling out the leftover carbon that’s causing climate change.

But, as my scientist friends say, it is much more complicated than that.

What scientists can learn from ranchers

During the filming of "Soil Carbon Cowboys," I met a group of scientists who were extremely excited to learn more about AMP grazing and whether it improved their specific studies of focus, such as soil microbes and fungi, greenhouse gas fluxes, grazing systems, cattle breeding, insects, agricultural economics and grass-finished beef production.

We since have formed a whole systems science research team to find out if, how and why these AMP ranchers are storing additional tons of carbon in their soils, and how that carbon affects the water cycle, biodiversity (of microbes, insects, plants and wildlife), animal and rancher well-being and greenhouse gas emissions.

Bring on the complication; these ranches also emit greenhouse gases such as CO2, nitrous oxide and methane.

The big question is the balance. Is the greenhouse gas equivalence (GHGe) of the stored soil carbon higher than the GHGe of the emitted CO2, nitrous oxide and methane? Basically, are AMP ranches net carbon sinks or carbon emitters? Our team’s early data suggests sinks.

The cattle’s diet is also part of this GHGe equation. Many AMP grazers produce grass-finished beef, where animals are finished on grass and never sent to a feedlot. Most cattle in the U.S. are sent to feedlots and fed corn to promote rapid weight gain.

Our team will look at the GHGe of grass-finished and corn-fed beef, including two key items:

1. Because grass-finished cattle live about a year longer than corn-finished, which animals produce more methane in their lifetimes?

2. What is the carbon footprint of growing the corn when one includes the soil erosion associated with corn production? The USDA says for every 1 pound of corn grown in Iowa, 2 pounds of soil is lost to erosion. Because soil contains carbon, this could be a huge carbon loss.

In our first GameChanger grant on business models, we spoke with over 100 thought leaders from business, agriculture, government, NGOs, academia and science.

We came away with three key insights about soil carbon storage via AMP grazing: People trust nature; finally, we can see a scalable environmental solution for climate change; and this solution creates common ground for political opponents.

In June 2014, Utah Rep. Rob Bishop, a Tea Party Republican and chairman of the House Natural Resources Committee, became the first congressperson to hold a hearing on soil carbon.

He is a strong proponent of the potential of AMP grazing being a viable solution to climate change. Will he do a good job inspiring more legislators to focus on soil carbon storage?

Of the 400,000 who hit the NYC streets in September in the Peoples’ Climate March, I’m guessing about 98 percent of them are convinced that beef production is inherently a potent contributor to climate change.

When considering intensive corn production and deforestation for grazing land, they make a strong case. So for them, it is especially counterintuitive that AMP grazing actually could be a great climate solution that produces healthy food, clean water and vibrant ecosystems.

Very few people want to be ranchers — and of those few, a smaller number are grazing pioneers, making good money while regenerating their soils.

Will more ranchers follow their lead? Better yet, is this what critical mass looks like a few years before it strikes? 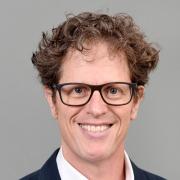 Carbon Nation at 10: The future’s not what it used to be

Why carbon cowboys are becoming leaders in their field

See all by Peter Byck