In an ironic way, the financial meltdown tipped off in 2008 — deepened by instability underlying interconnected international markets — may actually have been a good thing for global supply chain reformers.

That year, seared into history as the time Wall Street fell off a cliff, a relatively young London-based environmental NGO then known as the Carbon Disclosure Project (now simply CDP) was just starting a supply chain group focused on better tracking, and hopefully reducing, emissions linked to worldwide production.

"We were one of the areas that actually wasn’t hit particularly hard by the financial crisis," Dexter Galvin, head of supply chain at CDP, told GreenBiz. "The fallout was that people wanted more disclosure, more openness, more transparency from the big corporations."

Add to that thirst for visibility a continued emphasis on factory labor and safety, plus regulatory momentum after the Paris climate agreement, and supply chain sustainability is quickly becoming a focal point for more companies. Meanwhile, real-time data analytics and related technologies are also entering the supply chain fray.

"We’re moving into an era of more real-time data on what suppliers are doing," Galvin said. "It’s all about more and better data to help us make decisions."

For CDP, what started as an effort to better track and improve climate performance for suppliers of a few familiar consumer goods giants — Walmart, Unilever, L'Oreal — has ballooned to an 89-member organization representing $2.7 trillion in annual purchasing power.

It’s all about more and better data.

This winter, the group also will go beyond its now-familiar annual reports on the state of supply chain sustainability and actually rank companies head to head on supply chain performance for the first time. Late this summer, the NGO published its methodology for the report, which Galvin said will include climate data from 4,300 suppliers and water data from about 1,200 entities.

"Disclosure was our middle name, so we wanted to publish the methodology for companies to understand how they’ll be assessed," Galvin said. "It’s a really holistic view of what companies are doing to manage emissions."

Among the facets of supply chain management CDP will be looking for: whether companies are engaging suppliers at all; whether they have their buyers involved; whether they have data or environmental targets for their suppliers; and what sort of governance structure might be in place to monitor existing efforts.

Breaking the link to emissions

Sustainability rankings in general are nothing new, with the Down Jones Sustainability Indices being perhaps the most widely recognized across-the-board rating system. Still, as environmental scandals such as Volkswagen's dieselgate make plain, systems reliant on self-reporting are far from bulletproof.

In the case of CDP, the organization surveys suppliers rather than public-facing companies. This year, the plan is to release the first-of-its kind ranking in January, along with the usual trend report on supply chain sustainability approaches being adopted by members. Assuming all goes according to plan, subsequent years will include additional details on companies that aren't pulling their weight.

"Far too few companies are engaging their supply base," Galvin said. "I think it was 27 percent who responded to our request last year that were doing anything at all with their supply chain, which is ridiculous."

The reason Galvin finds the figure hard to believe is the outsized role that often-opaque supply chains play in the global environmental picture. 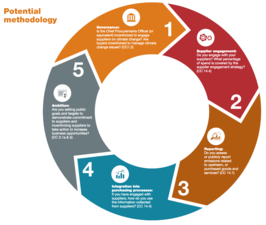 "Twenty-five percent of global carbon emissions from fossil fuels are emitted during production of goods that are consumed in a different country," said Dan Hamza Goodacre, program director for energy efficiency at CDP partner the ClimateWorks Foundation. "This has to end if we are serious about tackling climate change."

For retailers, Galvin added that supply chain emissions can be 10 times greater than a company's direct operational footprint.

Last year, more than 4,000 suppliers for CDP member organizations — among them companies ranging from Ford to Coca-Cola to Phillip Morris — voluntarily disclosed information on water and climate, although not always both and not always to report significant progress. North America, China and Brazil are all major markets for suppliers responding to the survey.

In the meantime, companies such as Apple have been quietly implementing in-country efforts to reign in the climate impacts of their suppliers — a class often referred to as "scope 3" emissions, compared to direct (scope 1) and indirect (scope 2) corporate emissions primarily covering daily operations and energy use.

One approach to digging deeper into the supply chain is incentivizing suppliers to adopt and report on efficiency projects, or even tying performance evaluations to sustainability goals.

"Where once suppliers were assessed 100 percent on price and quality, now we have that sustainability element creeping in," Galvin said. "With key suppliers to L'Oreal, 20 percent of their supplier score is based on their performance on climate change."

8 reasons to improve the climate impacts of your supply chain