How the organization enabled PPAs at prices 40 percent below median bids and plans to unlock a 5-30 GW market by 2020.

More than a year ago, Rocky Mountain Institute (RMI) announced its Shine Program would focus on community-scale solar. It claimed that community-scale solar could be procured at costs close to utility-scale solar, unlocking a 5–30 GW market by 2020. However, they could not have predicted the success of the initial projects. As RMI is enabling power purchase agreements (PPAs) at prices 40 percent below median bids, it is seeing increasing interest in community-scale solar and expanding efforts across the nation.

Community-scale solar can be a particularly good fit for electric cooperatives and municipal utilities, organizations that may not have the energy demand for large, utility-scale systems. Such small utilities often operate electric grids in rural areas where community-scale solar can add particular value: reduce costs of energy; provide a hedge against rising fuel prices; defer grid investments; and meet member demand for renewables.

A few key strategies have enabled RMI to deliver PPAs at lower prices: 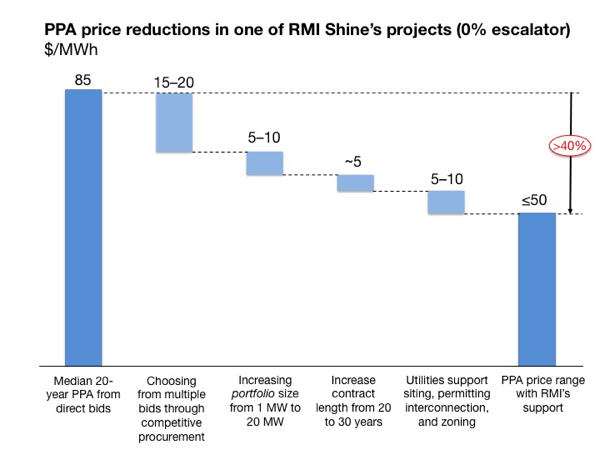 Going forward, RMI’s Shine program will continue to disrupt the market and further reduce costs by testing new opportunities, including:

RMI’s Shine program is supporting about 100 MW of ongoing projects in New Mexico, New York and Colorado, and exploring new projects in the South and Southeast, including Texas and North Carolina. This work brings them well toward reaching our goal of directly supporting 1 GW of new community-scale solar systems by 2020. Over the next few years, the program will focus on continuing to scale our efforts all around the nation.

Inside the misconception that hydrogen is a significant warming risk