As U.S. livestock farming becomes more industrial, it is changing rural life. Many people live near Concentrated Animal Feeding Operations (CAFOs) — large facilities that can house thousands of animals in close quarters. Neighbors have to contend with noxious odors, toxic emissions and swarms of insects, and have had little success in obtaining relief — but this could be changing.

On April 26, Murphy Brown LLC, a division of Smithfield Foods, was required to pay $75,000 in compensatory damages and $50 million in punitive damages in a nuisance lawsuit filed by 10 residents of Bladen County, North Carolina, over impacts from a nearby hog farm. On June 29, another North Carolina jury awarded $25 million to a couple in Duplin County in a similar lawsuit against Smithfield Foods. Other cases are pending in North Carolina and Iowa.

Smithfield Foods is the largest hog processor and producer in the world, so these verdicts are major victories for people organizing against industrialized animal agriculture. Based on my experience studying environmental health at the community level, I see them as breakthroughs after decades of government failure to protect rural communities from negative impacts of CAFOs. 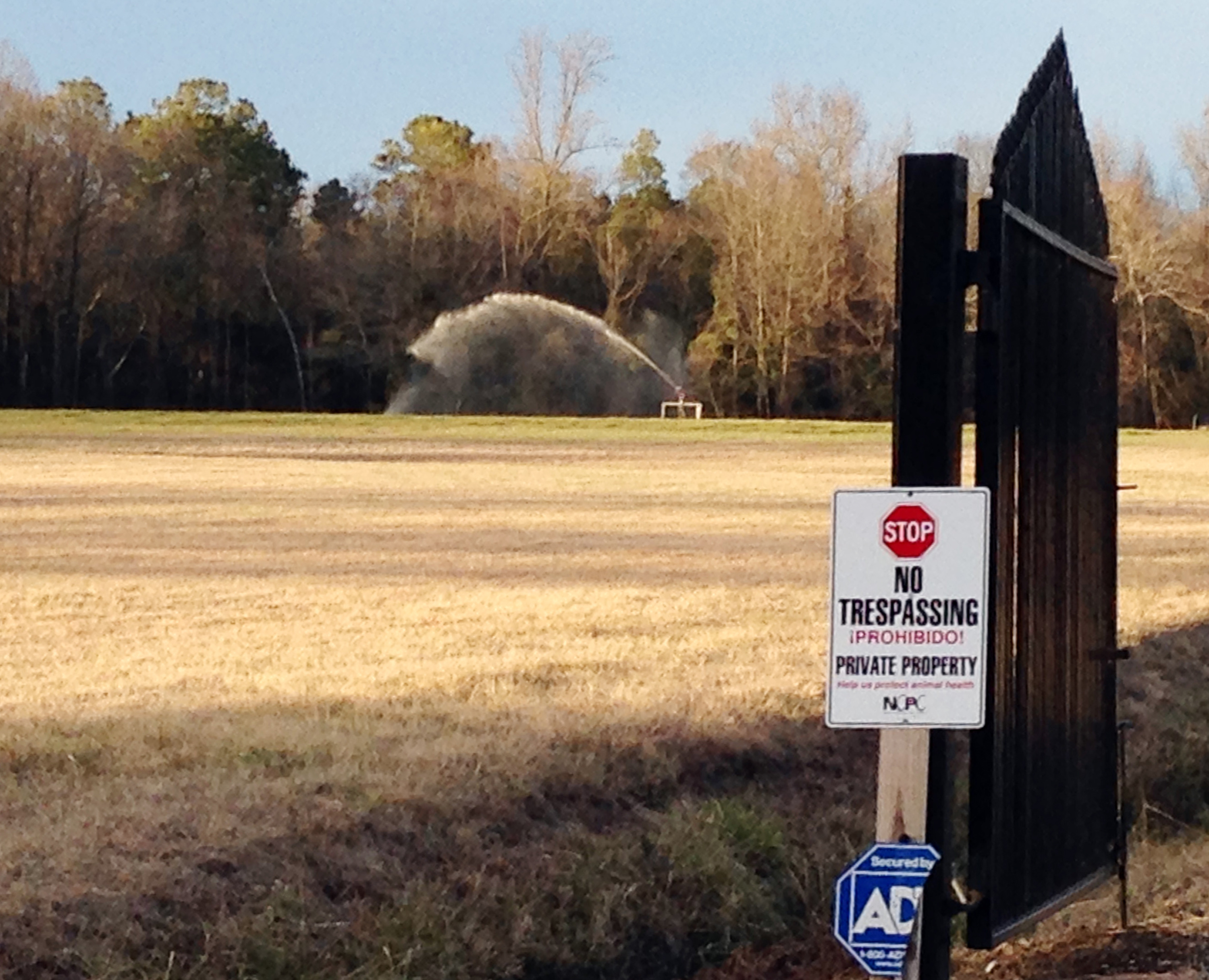 A sprayer soaks a field with liquefied manure and urine from a large-scale hog farm in Duplin County, North Carolina. AP Photo/Emery Dalesio

Threats to health and the environment

Unlike human biosolids, which must meet regulatory standards for pathogen levels, vector attraction reduction and metal content, no such standards are required for CAFO waste.

Hog waste can contaminate ground and surface water reserves through runoff, leaching and rupturing of storage facilities. High quantities of nitrates and phosphates, from both animal waste and fertilizers used to grow feed, also can contaminate rivers and streams.

Bacteria and residual antibiotics present in hog waste have the potential to cause acute illness and infection, as well as antibiotic resistance. Rural communities are especially vulnerable to water contamination because many rely on private well water, which is not regulated by government agencies. 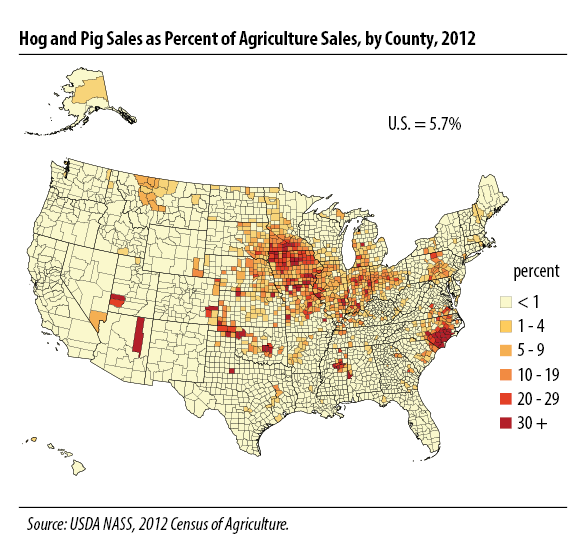 U.S. hog farms are concentrated in the Midwest and Southeast.

Impacts beyond the farm

The Bladen County lawsuit charged that waste management techniques employed by Kinlaw Farm, a local hog producer for Murphy Brown LLC, put neighbors’ health at risk and severely lowered their quality of life. The farm stored liquid manure in on-site lagoons and sprayed it on local fields as fertilizer.

High volumes of waste and frequent mishandling exposed nearby residents to noxious odors. The lagoons attracted swarms of insects onto neighboring properties, and plaintiffs complained in the lawsuit that trucks packed with dead animals drove through the neighborhood at all hours of the day.

Such conditions characterize the lives of people who live close to CAFOs. People who cherish the freedom of rural life are anguished when pollution and overpowering smells make it impossible to perform everyday tasks and engage with their community. Many feel imprisoned within their own homes.

Shane Rogers, a former EPA and USDA environmental engineer, published an air quality investigation (PDF) in May that provided evidence to support the nuisance lawsuit. Using samples collected from the air and exteriors of homes neighboring Kinlaw Farm, Rogers was able to isolate hog feces DNA at 14 of the 17 homes tested. All six dust samples collected from the air contained "tens of thousands to hundreds of thousands of hog feces DNA particles."

Based on such high concentrations, Rogers deemed it highly likely that these contaminants could enter the houses. The presence of fecal matter in homes may provide grounds for a trespassing claim, as it falls under the definition of a physical invasion of another person’s property.

Although the North Carolina settlement is a major step forward for rural communities, the industry is pushing back. Smithfield Foods has condemned such lawsuits as "nothing more than a money grab by a big litigation machine." The company asserts that because Kinlaw Farm fully complied with all federal, state and local laws and regulations, such lawsuits only threaten the livelihoods and economic prosperity of thousands of North Carolinians employed by the industry.

Although the North Carolina settlement is a major step forward for rural communities, Smithfield Foods has condemned such lawsuits as 'nothing more than a money grab by a big litigation machine.'

A few weeks after the April verdict, the judge reduced the settlement from $50.75 million to $3.25 million, pursuant to a North Carolina law which caps punitive damages at either three times the amount of compensatory damages awarded or $250,000. This allotment does not address community members’ suffering, and jurors were unaware of the law limiting punitive damages when they reached their decision.

In response to 23 nuisance cases filed by over 500 residents, the North Carolina legislature recently voted to expand its right-to-farm law, overriding Gov. Roy Cooper’s veto. These laws originally were designed to protect farms from people who moved in nearby and then complained about noise and odors. However, industries in some agricultural states have pushed legislatures to expand the statutes to make it harder to sue CAFOs.

In my view, current measures in place to protect rural communities from factory farms are grossly insufficient. CAFOs have been defined as point sources of pollution under the Clean Water Act for over 40 years. This means they should have to obtain permits to discharge waste into river, streams or surface waters. But due to industry pushback, lobbying and privacy concerns, it is estimated that only 33 percent of CAFOs operated with such permits (PDF) as of 2017.

Environmental advocates also contend that CAFOs qualify as stationary pollution source under the Clean Air Act. Instead, the U.S. Environmental Protection Agency has pursued a voluntary approach for more than a decade that centers on studying how to monitor CAFO air emissions.

In sum, I see governmental agencies as complicit within a system of production that prioritizes private interests rather than the well-being of communities and the environment. Research has shown that these operations disproportionately burden communities of color in rural North Carolina (PDF), so this is a major environmental justice issue.

In order for CAFOs and communities to coexist harmoniously, the entire structure of the present food system must change. In addition to strengthening regulations on factory farm emissions and discharges, I think regulators should provide incentives for CAFOs to invest in sustainable technologies and alternative waste management systems.

These farms also should be offered incentives to publicly report quality and safety data and expected impacts on host and nearby communities. This kind of information would increase rural residents’ negotiating power.

Given the Trump administration’s anti-regulatory slant and proposed budget cuts, the federal government is unlikely to lead in this area. However, the North Carolina verdicts and pending cases in Iowa could lead to greater industry transparency and empower more rural citizens to take action against CAFOs in their communities.

Crystal Mehdizadeh, a bachelor’s degree candidate in public health science at the University of Maryland-College Park, contributed to this article.

Can farmed fish save aquaculture?