Whole Foods Market is on track to switch two types of wild-caight fish to more sustainable supplies by Earth Day and Kroger plans to convert its top 20 seafood species to certified sustainable sources.

Safeway, though, has blown both out of the water with major changes to its policies that netted it the top spot in Greenpeace's sustainable seafood rankings.

Whole Foods expects to stop selling any swordfish and tuna that come from red-rated fisheries — meaning they were caught with methods that are unsustainable or harm other sea life — by this coming Earth Day, April 22. Instead, seafood buyers are seeking out fish from green- and yellow-rated sources, which use methods like handlines or harpoons to catch fish instead of nets that can also capture turtles, sharks and other creatures not intended for store shelves.

Whole Foods plans to transition the bulk of its other red-rated seafood by next Earth Day, and, lastly, cut out all red-rated Atlantic cod and sole by Earth Day 2013. The company said it started with swordfish and tuna since there were already fisheries rated green or yellow. Switching other species will involve both working with fisheries to get them to try different fishing methods and showing that customers are buying fish from sustainable sources. While there are various ranking systems for seafood, Whole Foods follows ratings by the the Blue Ocean Institute and Monterey Bay Aquarium.

While Whole Foods follows through with its plans that were set in place last year, Kroger has laid down new goals for its seafood, pledging to eliminate shark, marlin and bluefin tuna from its stores as well as shift to more sustainable sources for other seafood.

About half of the top 20 species that Kroger sells are certified by the Marine Stewardship Council (MSC) or are being assessed for certification. By 2015, the grocer plans for all of its top 20 species to be certified, in the assessment process or involved in a World Wildlife Fund fishery improvement project.

When it comes to their current overall seafood programs, though, both fall short of Safeway's work, says Greenpeace, which released yesterday its latest "Carting Away the Oceans" report. 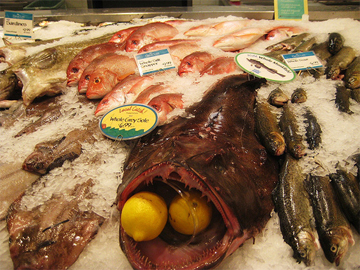 The report rates retailers on their seafood policies, initiatives, labeling and transparency (how much information they provide in stores, online and in reports), and their sales of 22 red list species.

One a scale of 0-100 points, five companies received "fail" labels with less than 40 points, and the remaining 15 companies got "pass" scores between 40 and 70 points. None have yet to crack the "green" category, but the top four companies earned more than 60 points each.

Safeway jumped up three spots in the report, passing Target, Wegmans and Whole Foods, each of which have help the number-one location in the past.

"Now we've had a leader at some point from all major sectors of grocery," said Casson Trenor, report author and Greenpeace seafood campaigner. "Sustainability is not just for the wealthy. Sustainability is something attainable by all levels of the grocery sector," he said, whether its big-box stores like Target, speciality stores like Whole Foods and Wegmans, or conventional grocers like Safeway.

Safeway got a boost by developing new sourcing policies, providing more information to customers, selling less red-list fish and even disallowing itself from adding new red-list species in the future.

Kroger is down at spot number 15 with 42 points, just a couple points above the "fail" threshold. Whole Foods, which is only three points behind Safeway, has "the strongest and most complex sourcing policy," says Greenpeace's report, but it's score is hindered by the fact that is sells 18 of the 22 fish on Greenpeace's red list.

While Greenpeace was aware of the two companies' announcements this month, they didn't affect their score much since they won't take full effect until next year or later.

"Down the line, they are going to make a tremendous amount of difference," Trenor said. "When they follow through I have no doubt that Whole Foods' score is going to go considerably up."

It's not too late to join the conversation of leaders exploring solutions to sustainably feed billions. Register for VERGE 21, October 25-28. Rates increase October 22!