Sailing toward a brighter horizon

The Land Rover Ben Ainslie Racing Team is going for a never-accomplished double in world class sailing in 2016-2017: 1. Win the 2017 America’s Cup for Great Britain (that’s right, the U.K. never has won it), and 2. Do so while being the most sustainable sailing operation ever.

Sir Ben Ainslie, skipper of the team, winner of the 2013 America’s Cup while sailing for the U.S. Team Oracle, and the most decorated Olympic sailor, is taking the lead regarding the first goal. His vision is animating the second. GreenSportsBlog spoke with Susie Tomson, Land Rover BAR’s sustainability director, about surmounting the high sustainability bar Ainslie has set for the team.

GreenSportsBlog: Before we get into the Land Rover Ben Ainslie Racing’s (BAR’s) sustainability story — which is, to the uninitiated, quite amazing — I’d like to get a little bit of your background. What roads led you to become the team’s sustainability director?

Susie Tomson: Well, for starters, I had an environmental work background. In particular that meant using data and information to help organizations make smarter environmental decisions. I always loved sport and got sustainability work with the Royal Yachting Association, the London 2012 Olympics and the Ryder Cup. I then met Sir Ben Ainslie while in the states about two years ago just as he was coming off winning the 2013 America’s Cup and was starting his own team and I was on the team a few months after that.

GSB: So did you bring the sustainability vision to the team or did Ainslie already have green as part of the team’s core?

Tomson: Ben definitely had the vision when I joined. You’ve got to realize, the team started around 18 months ago but sustainability was involved from the planning stages months earlier.

GSB: Where did Ainslie’s vision come from? I don’t automatically associate sailing with concern for climate change and the environment. 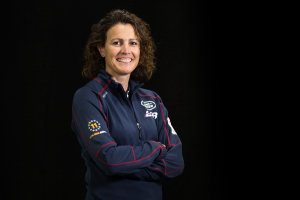 Tomson: Well, everything Ben does is big. He won the 2013 America’s Cup for Oracle, leading one of the greatest comebacks of all time. He’s the most decorated Olympic sailor ever. His sustainability vision is equally big, and that is to ensure we have a healthy, clean ocean environment. There is no other option. And he, through his position in the sailing world, aims to bring along other teams on sustainability.

GSB: That’s likely why he was enlisted as a spokesperson for 100% Sport (#Go100Percent), the movement led by athletes and sports teams, to get people to switch their electricity supply for their homes and businesses from dirty power to 100 percent clean power.

GSB: So tell me, what are your chief responsibilities?

Tomson: Taking a big picture view, we need to do in sailing what the world needs as it relates to climate change. The world, especially as we grow from 7 billion people to 9 billion by 2050, needs to consume resources with much greater efficiency. The same holds true with sailing: Maximum performance whilst using a minimum of resources.

GSB: So what does that mean for Land Rover BAR?

Tomson: It informs everything we’ve done and everything we do. Starting 18 months ago, we had to build the team’s base complex in Portsmouth. We built it to a high BREEAM standard, with BREEAM being the U.K. equivalent of LEED certification. We have on-site solar which supplies the base with 20 percent of its electricity. Use LED lights. Water use at the base is optimized. The Visitors Center, which is being built, will also be to BREEAM standards.

GSB: That’s terrific. What about measuring your environmental impacts?

We also use Life Cycle Assessment (LCA) to measure the efficiency of our use of resources in the building of our race boats as well as the support boats. 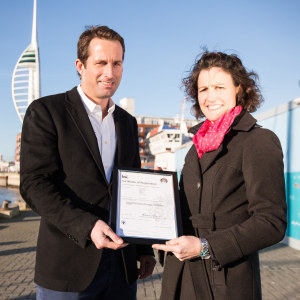 GSB: What is Life Cycle Assessment?

Tomson: It’s a detailed look at every process, every input, from a carbon point of view, involved in the building of the boat, from concept to design to manufacturing to transportation to end of life. This is really a first in the sailing world.

GSB: Can you give us a for-instance as to how LCA has helped the team be more carbon efficient?

Tomson: One example is that it helped us to figure out how we can use recycled carbon fiber in the molds from which the race boat is made. The recycled is much less carbon-intense than virgin carbon fiber. For our two docking rigid inflatable support boats (RIBS), LCA showed that, by using recycled PET plastic, natural flax fibers in the floor and a bio-based resin, we could save both on carbon and on cost. Building LCA databases is a massive project but it’s making a significant difference, carbon-efficiency-wise. And then there is the Virtual Support Boat.

Tomson: I’ll answer that by taking your readers back to the old way of doing things, in which actual support boats would go out to sea with the race boat to track how the boat is doing on a number of advanced metrics. But now race boats are too fast for support boats to keep up. Plus there’s a significant carbon cost as well as monetary cost of building, maintaining, operating and disposing of these boats. And now, we’ve developed a new way of having the functionality of a support boat but without having to actually build the boats. So now all of the data is transmitted from the race boat to our base.

Tomson: Yes. This has significant carbon reduction benefits as well as time-saving benefits — we keep the designers on land, off the water.

We need to do in sailing what the world needs as it relates to climate change. The world needs to consume resources with much greater efficiency. The same holds true with sailing.

Tomson: Formula 1 teams did it in auto racing but we’re the first in sailing to use this approach.

GSB: This raises an interesting moral question. On the one hand, the ethos of the team would be to share this technology with its competitors, which would lower the carbon footprint of all teams. On the other, Land Rover BAR has a competitive advantage right now. Is Ainslie willing to give that up?

Tomson: Absolutely. We want the other teams to follow suit on this and other aspects of sustainability.

GSB: Like LCA and the use of recycled carbon fiber?

Tomson: Certainly. We really want to influence not only sailing racing teams but the entire marine and composite industries.

GSB: What other sustainability "next steps" does the team have planned?

Tomson: Fan engagement is a big component of our sustainability strategy for 2016 and beyond. This year, we’ll be competing in the America’s Cup World Series, races all around the world that will serve as the run-up to the America’s Cup Finals in Bermuda in 2017. At each of the races, including those in New York City in early May and in Chicago in June, we will, along with 11th Hour Racing, conduct awareness-building programs and offer sustainability education, with a particular focus on youth. Also in 2015, British Telecommunications (BT) became a big partner of ours through its 100% Sport initiative.

GSB: Yes, we reported on that last year — a terrific program that lines up athletes and teams to commit to buying their electricity that’s generated from 100 percent clean sources.

Tomson: Ben Ainslie was the first athlete to #Go100Percent and BT is getting that message out. We also send a monthly sustainability message to 15,000-plus fans in the U.K.

Tomson: It is with Land Rover BAR as well. We live it every day.