There are many paths that corporate buyers can follow to meet renewable energy commitments.

The corporate appetite for clean power is far from sated. Businesses are buying renewable energy to cut their carbon footprints and take advantage of falling prices, more standardized contracts and the help that's available for navigating the path to clean energy.

In two mammoth examples that emerged last week, data operator Switch said Wednesday that it teamed up with some of its customers to buy one gigawatt of power from Nevada solar farms, and telecom giant AT&T said Thursday that it's buying 520 megawatts of power from wind farms in Oklahoma and Texas.

These deals show that many companies have a growing hunger for clean energy, in large part to demonstrate their environmental responsibility in response to expectations from investors, customers, employees, communities where they operate or all of the above.

In 2017, Google, Apple, Facebook, General Motors and other companies signed power purchase agreements in which they've agreed to buy 3,110 MW of wind and solar power, up from 1,610 MW of corporate renewable energy contracts signed in 2016, according to the Rocky Mountain Institute's Business Renewables Center.

At the same time, companies working directly with their local utility reached deals for 560 MW of renewables through what are called "green tariff deals," up from 220 MW of such deals in 2016, according to the World Resources Institute.

Many of these companies are among the 124 members of RE100, a group committed to sourcing 100 percent of their power from renewable sources.

For Salesforce, an RE100 member, buying renewable energy is one of the best ways to cut its carbon footprint, as 90 percent of the software company's emissions come from electricity use, said Max Scher, the company's sustainability manager. "We're trying to help the world transition to a low-carbon economy," he said, speaking last week at the GreenBiz 18 conference in Phoenix. "In order to get there, you want to add more renewable energy to the grid."

Salesforce and other companies have managed to buy large amounts of renewables, even in states where utilities have monopolies, by leveraging green tariffs or special arrangements with their utility or through virtual power purchase agreements (VPPAs).

We're trying to help the world transition to a low-carbon economy.

Under such agreements, the company signs a long-term contract with a wind or solar farm developer, so that the firm can obtain financing to build the project. When the project is completed, the company buys the renewable energy certificates (RECs), or environmental attributes, from the project at a fixed price. The developer sells the electricity into the wholesale market and sends the proceeds back to the company. The company still must pay its utility for the power it actually uses from the local grid, but the payments from the wholesale power sales are used to offset the company's monthly utility bill.

Rocky Mountain Institute has a nifty illustration that shows how this works. 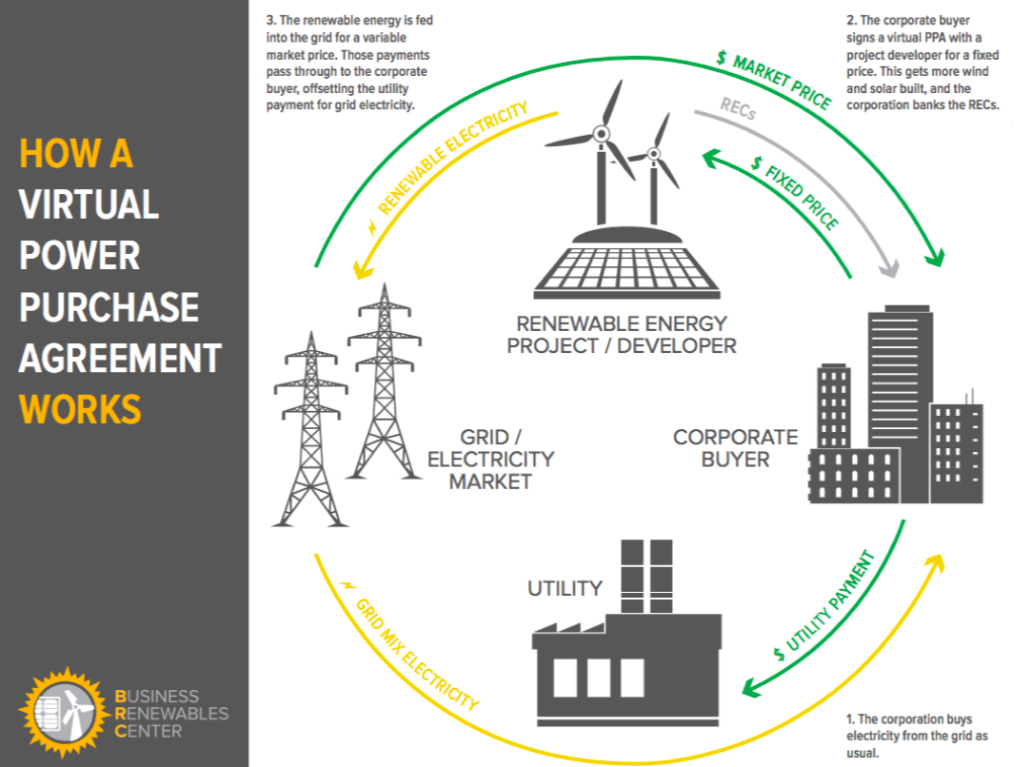 AT&T, Salesforce and other companies credit their success in navigating the renewable energy market to the help they have received from managers at other companies and other energy experts at the Renewable Energy Buyers Alliance (REBA).

"If you're just getting interested in renewable energy, you don't have to start from scratch anymore," said Martin Spitzer, senior director of climate and renewable energy at the World Wildlife Fund, and an advisor to REBA member companies. As a REBA member, "you can meet regularly with people from all kinds of companies who are trying to do the very same thing and who either have been down the road before, or are in the same place you are, figuring out that journey."

AT&T just signed a VPPA with two wind farms, said Shannon Carroll, the company's director of environmental sustainability. Through the deal, AT&T agrees to purchase all the energy the farms generate over the 15-year term of the contract. The wind farm sells the actual electrons it generates into the wholesale power market, and AT&T receives the renewable energy credits for each megawatt-hour that's generated. The company will use the RECs to offset its greenhouse-gas emissions.

"We know that embracing sustainability, including renewables, is not just good for the planet but is a sound business decision," he said. "By purchasing 520 MW of wind energy, we have been able to secure sustainable energy that we can count on to help us meet all of our customers’ needs, demonstrating value for consumers, the company and the environment."

We know that embracing sustainability, including renewables, is not just good for the planet but is a sound business decision.

In states that have competitive retail power markets, such as Texas, New York and Massachusetts, companies can buy power directly from renewable power generators.

GM, another RE100 member, has 48 MW of on-site solar power at 22 facilities; three of its U.S. factories use landfill gas to generate power. The U.S. automaker also buys electricity directly from wind farms in Texas and Mexico, which power its factories nearby, through PPAs. The company is looking to do more of these types of deals.

"Our manufacturing sites are close to the wind farms, and they track closely," said Rob Threlkeld, global manager for renewable energy at GM, during a GreenBiz 18 session. He added that in Texas and Ohio, GM uses renewable energy directly from where it's generated, to the company's facilities, which are close by.

Corporate customers procured 40 percent of the wind power sold in 2017 through PPAs, or nearly 2,200 MW, according to the American Wind Energy Association (PDF).

Many companies are also generating their own clean power at their own facilities.

Giant food producer Cargill uses more than a dozen renewable energy sources at more than 100 locations around the world, primarily biomass and biogas, which are produced from agricultural and meat byproducts and used to fuel power generators, but the company also has on-site solar and wind power generators, as well as batteries.

"Much of the renewable energy we use comes from our own facilities, such as cocoa shells, sunflower hulls, sugarcane pulp and palm hulls," said Jill Kolling, global sustainability leader at Cargill.

Much of the renewable energy we use comes from our own facilities.

In one example, Cargill operates a beef processing plant in High River, Alberta, that gets about half its power from on-site generators, fueled using biomaterials. Manure and discarded animal parts are burned to generate electricity and to dispose of the waste.

All of the company's North American beef processing plants capture methane from wastewater lagoons, which is used to fuel biodigesters that power boilers that generate steam for the plants.

In addition, Microsoft aims to buy renewable energy in amounts that keep up with the power used by its expanding cloud computing business, which relies on data centers around the world.

Centralizing data computing into discreet data centers, rather than having it scattered across millions of data storage facilities, actually reduces emissions, said Brandon Middaugh, senior program manager for distributed energy with Microsoft. Even so, the tech giant's data centers around the world are the largest portion of the company’s energy footprint, and a big focus of the company's renewable energy activities.

"We try to combine renewable energy targets with new technologies that we're deploying on site, such as lithium-ion batteries, biogas-driven data center computing fuel cells, and other new technologies, where they fit the core business and they allow us to meet our clean-energy goals," she said at GreenBiz 18.

Corporate and other non-residential customers installed 1,372 MWs of solar panels during the first three quarters of 2017, up 3 percent from the same period a year earlier, according to the Solar Energy Industries Association and GTM Research.