The new Salesforce Tower, which opened to employees this week in San Francisco, isn't just the tallest one gracing the skyline of the City by the Bay. The structure sets a new bar for reducing water consumption in commercial office buildings.

By the end of the year, the 1.4 million-square foot, 61-story skyscraper will boast the largest commercial "blackwater" recycling system in the United States — and the first such installation in California. Salesforce eventually will occupy 36 floors, or about 881,762 square feet of the property.

The technology from Australian company Aquacell will reduce the tower's drain on the local drinking water supply by 7.8 million gallons annually or 30,000 gallons daily. Put another way, the system will result in a 76 percent reduction in the building's water footprint, according to Patrick Flynn, senior director of sustainability for the cloud software giant. "This is a step above and beyond what we have to do," he said.

The thing about water and water stress is that it's very regionally specific. This technology is best suited for places of drought.

Blackwater systems work by extensively filtering and processing the water draining out of toilets, urinals, kitchen and utility sinks, and dishwashers using membrane bioreactors, ultraviolet radiation and other methods. The treated water is repurposed for non-potable applications such as for toilets, urinals and drip irrigation, recirculated through a different set of pipes.

Greywater systems use a similar approach and are suitable for similar uses; the main difference between that technology and this one is that the former doesn't process the water from toilets so they don't have to handle as many contaminants.

Salesforce began studying the technology for its new headquarters several years ago, in the height of the California drought. That decision was motivated, in part, by building ordinances in San Francisco that require buildings of a certain size to invest in graywater recycling systems for non-potable consumption. Another carrot: The local public utility is offering grants (automatic PDF download) of up to $250,000 to encourage these investments in structures larger than 100,000 square feet that save at least 1 million gallons of potable water annually over at least eight years. 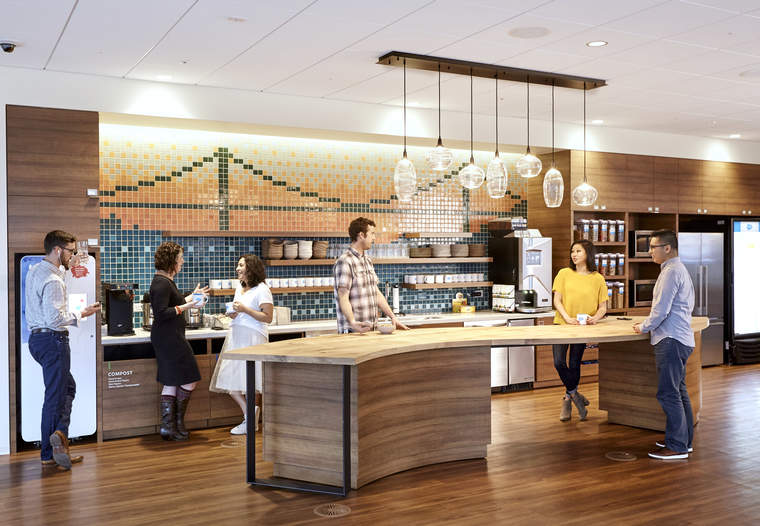 Salesforce
<p><span>The blackwater system processes water collected from toilets, urinals, kitchen and utility sinks, and dishwashers using membrane bioreactors, ultraviolet radiation&nbsp;</span>and<span>&nbsp;other methods.</span></p>
Salesforce is taking advantage of that program, although Flynn declined to discuss the financial aspects of the project. The money is awarded at different phases: after the design is approved; when the system is connected; and after its performance has been validated over time.

"We are doing this because this is the right thing to do," Flynn said. "I do believe that we would have looked closely at this option, regardless."

The building's developers, Boston Properties and Hines, were important allies in the process, helping to set the parameters for the selection and sizing of the installation. They also worked with a subcommittee of the Salesforce team — a cross-discipline team including representatives from real estate, finance, project management and sustainability — to define testing, operation and maintenance requirements. The technology is housed in a space created by reallocating several parking spaces in the buildings garage space, Flynn said.

Generally speaking, water recycling systems still aren’t that common in the United States but are popping up in water-stressed countries in the Middle East, as well as in Australia and Singapore. Aquacell is actually behind at least one other installation in San Francisco — its greywater system is used in a nearby 55-story building combining condominiums and commercial office space.

Will Salesforce consider this technology elsewhere? Flynn said time will tell, although the parameters used to guide this project will become part of the framework used to guide the real estate's decisions about green building investments. "The thing about water and water stress is that it's very regionally specific," he said. "This technology is best suited for places of drought."

The Salesforce Tower is on track to become the highest-rated building under the LEED version 4 program.