San Francisco took the title as the greenest city in North American in a study of the environmental performance and commitments by 27 major metro areas in the U.S. and Canada.

The study, conducted by the Economist Intelligence Unit and commissioned by Siemens, is part of the Green City Index, an ongoing research project that looks at global regions and their major cities. The index, which covers Europe (where Copenhagen topped the list), Asia and Latin America, was expanded to North America and Germany this year.

The 27 cities examined in the study were ranked based on scores in nine areas -- CO2, energy, land use, buildings, transport, water, waste, air and environmental governance. Thirty-one indicators were evaluated across the nine categories, as shown in the chart at the foot of the page.

Here are the rankings for the cities and their overall scores:

Here are the areas in which they are evaluated: 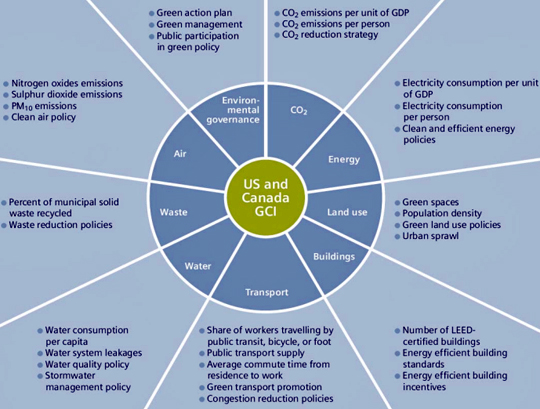 In addition to having the top overall score, San Francisco was among the five top scorers in six categories -- air, energy, buildings, transport, waste and water. Among the categories, San Francisco claimed the No. 1 spot in waste management having been the first U.S. city to require composting and recycling for residents, commercial properties, food establishments and events.

The report also praised the city for forging partnerships with the private sector to push green initiatives. Recent adoption of an ordinance requiring energy auditing of existing buildings is an example of how such relationships -- this case involved industry participants in a commercial building task force -- have produced results in San Francisco.

“It’s certainly an honor for San Francisco to be named the greenest city in North America, and it’s great to get recognition for the good work San Franciscans have done,” said Mayor Edwin M. Lee in a statement.

"Despite the fact that we do not have a federal climate policy in the United States -- and no federal carbon standard -- 21 of the 27 cities in the index have already set their own carbon reduction targets," Spiegel said in a statement released with the results. "Cities are creating comprehensive sustainability plans, utilizing current technology and proving everyday that we don't have to wait to create a more sustainable future."

The study findings were announced at the 2011 Aspen Ideas Festival. The full report is available for free download from Siemens.

Last week, San Francisco topped another green rankings list. The Green Building Opportunity Index, which is compiled by Cushman & Wakefield in collaboration with the Northwest Energy Efficiency Alliance’s BetterBricks initiative, named San Francisco No. 1 among the 30 largest office markets in the U.S. for a second consecutive year.