On the scene at Circularity 19

CEOs at the helm of new business models representing everything from consumer products to water to finance. Experts and analysts in design paradigms, plastic waste and social justice. Founders of startups that foster connections in material health, provide technological solutions for recycling and develop metrics for the circular economy.

Professionals, leaders, financiers and advocates gathered in Minneapolis last week for the launch of the largest circular economy event in North America, GreenBiz Group's Circularity 19. The first-of-its-kind event had sold out a few weeks before it took place, and the energy in the room was palpable.

The question at the heart of the gathering — and front and center on attendees' minds — was, what does a circular economy look like? And what will it take to get us to a system that moves beyond the current linear "take, make, dispose" model — a world that maximizes its resources, safely, circularly and justly?

From interviews with tech giants to a packed-house summit on plastics to mainstage announcements of circular commitments to tours of Target, the three days were filled with hands-on interactions and important discussions.

Whether you were among the sold-out crowd, watched virtually from home or caught glimpses on social media, get a taste of some of the action that took place in Minneapolis last week. 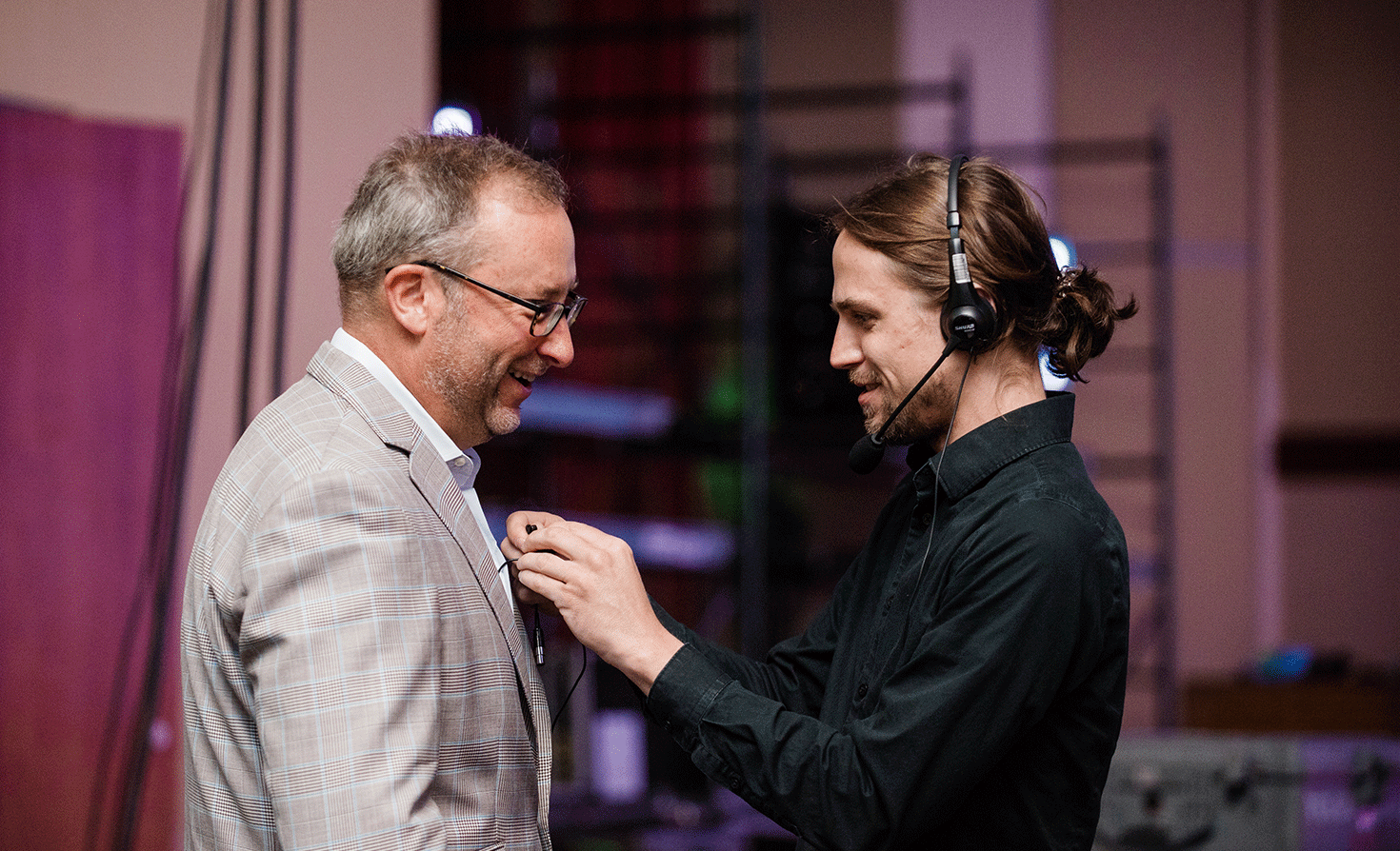 GreenBiz Group President and Co-founder Pete May gets mic'ed up backstage before he takes the mainstage at the Minneapolis Marriott to give the Day 2 welcome address. "It's been really inspiring to see the growth of this area of sustainability," he tells the crowd as he takes the stage. "I've never seen anything like it. Since about nine months ago when we decided that we were going to create the first circular economy event in North America to when we set up our first advisory board meeting held here in Minneapolis, we knew we were onto something ... There's a heat around this topic, and we're so excited to be in the heart of a new market." 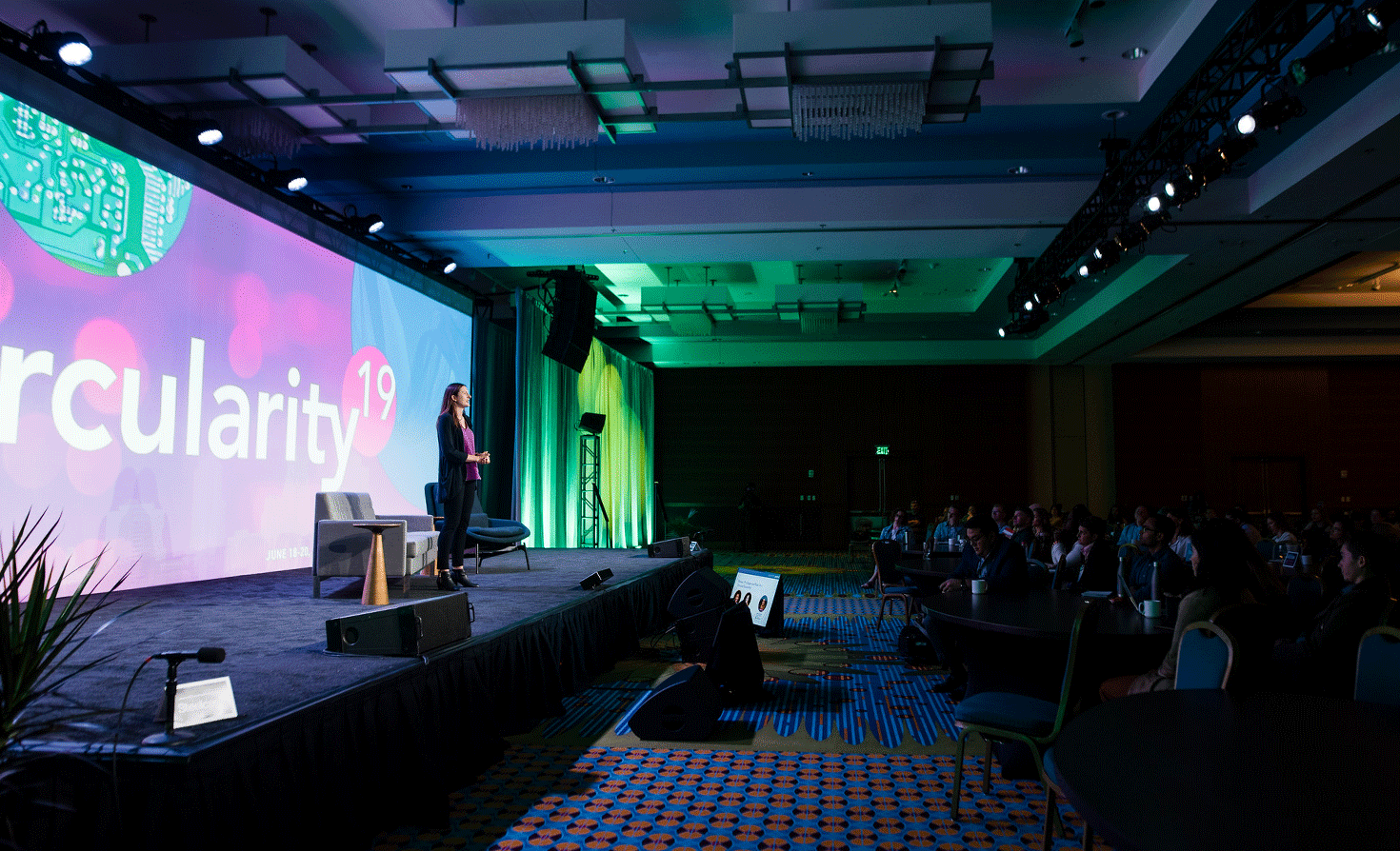 Lauren Phipps, director and senior analyst of the circular economy at GreenBiz Group, addresses the packed room: "I feel incredibly privileged to be up here. I've been working hard for about the past year for you all to be able to come, and I'm proud of the work we've done here — and the work you all are doing." 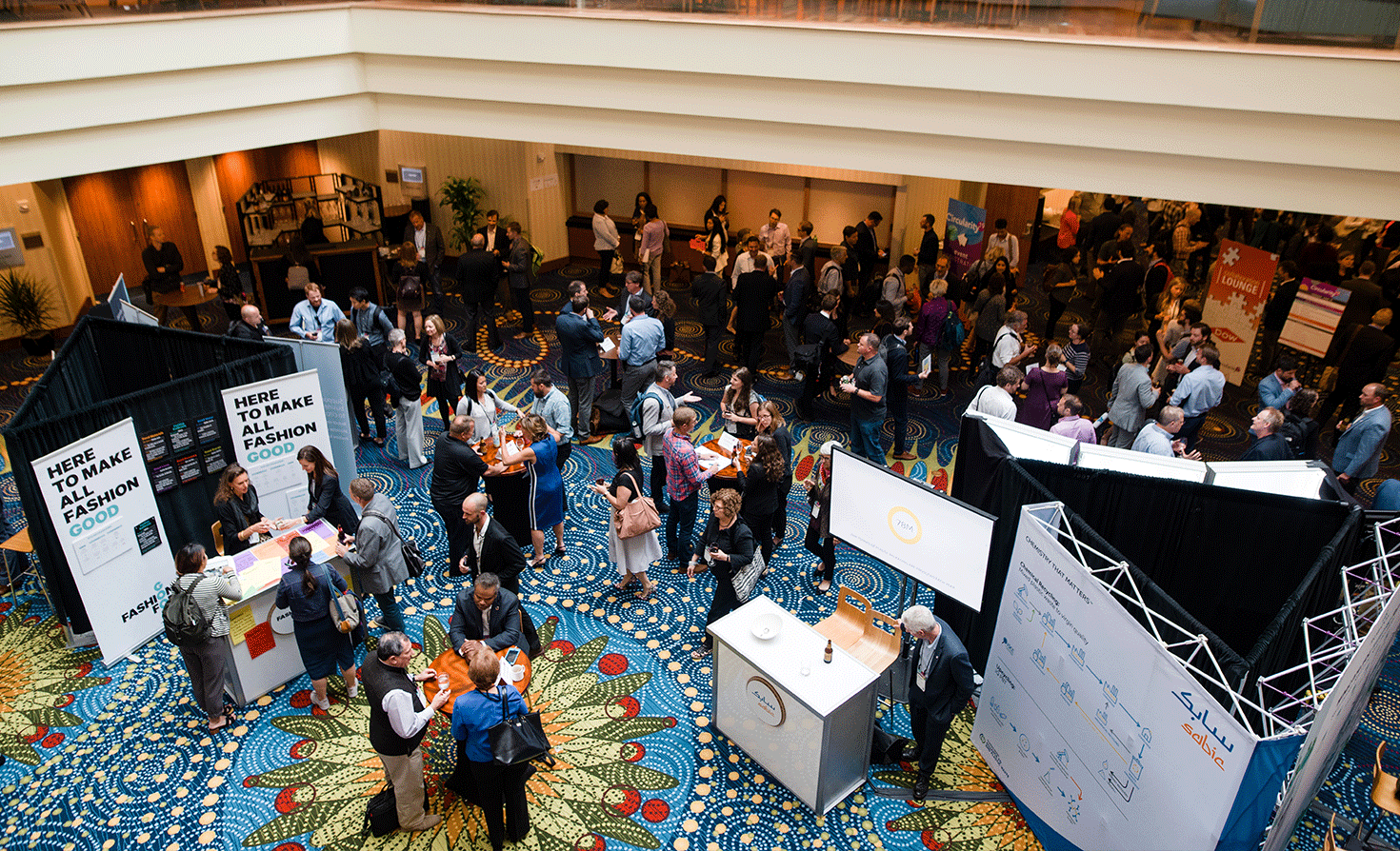 Conference attendees explore and mingle inside of the exhibition hall during breaks and networking events. Old co-workers, new partners, upstart founders, legacy investors, customers and acquaintances all connect and consume with good spirits. 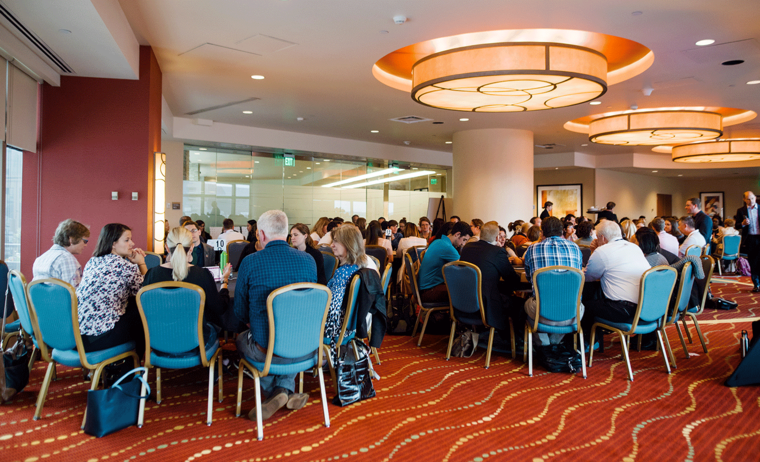 Those with questions about circular topics have the opportunity to break bread and chew the fat directly with experts at roundtable lunches. With conversation topics ranging from "Industry Trade Associations & the Circular Economy" to "Turning Plastic Waste Commitments Into Meaningful Action" to "Talking in Circles: Discuss Tech, Trends and Tips with GreenBiz Editors" (this one co-led by yours truly), the roundtables foster fruitful discussion. 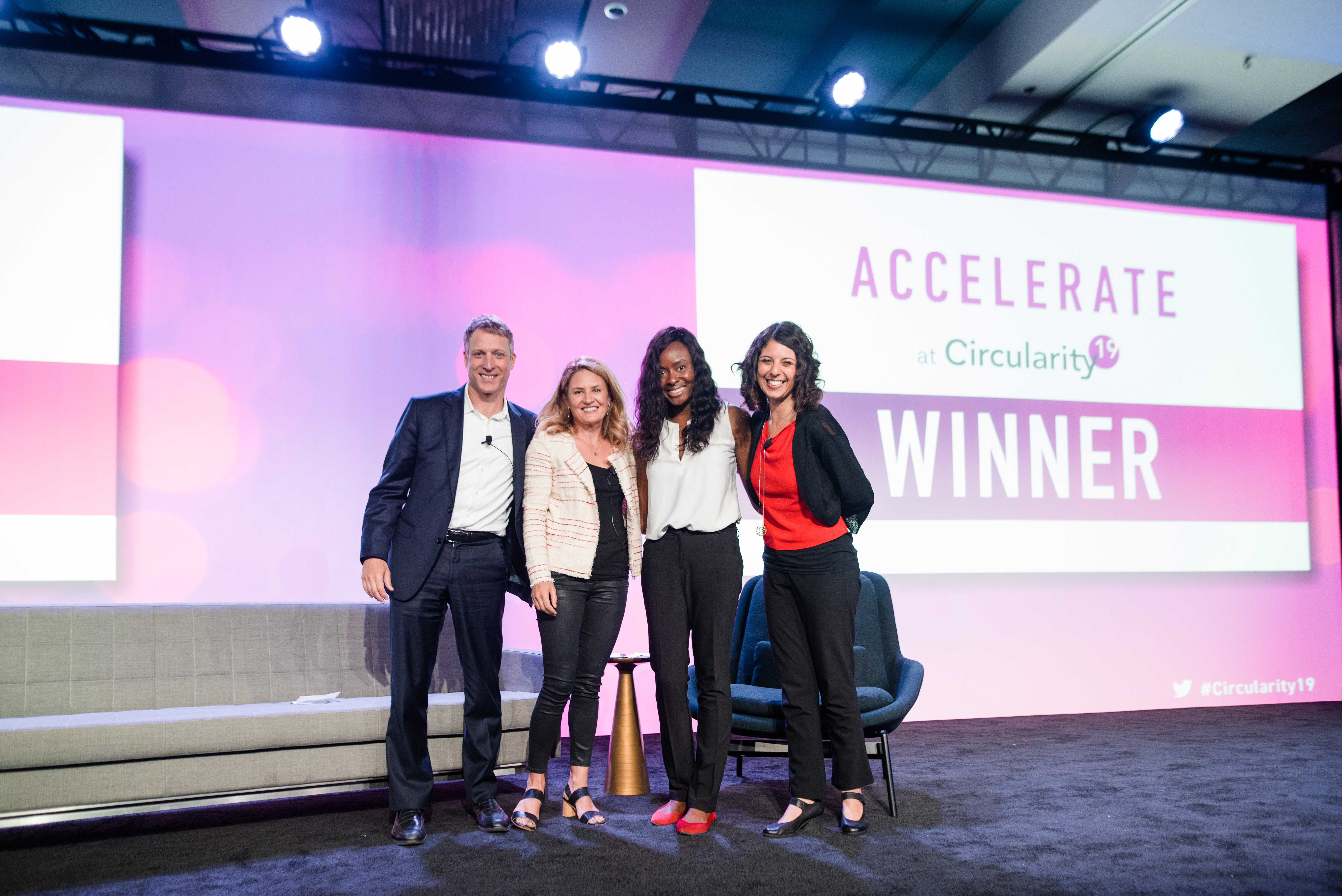 Circularity 19 continues the tradition that started seven years ago at GreenBiz's original VERGE events: a fast-pitch competition for startups with cleantech, clean economic models and clean products. At last week's conference, circular startups pitching ideas from waste data collection to textile recycling to platforms for reusable items were voted on by conference attendees. Pictured here are the winners: Lime Loop, which produces a smart, returnable shipper made of durable, lightweight, waterproof billboard vinyl. 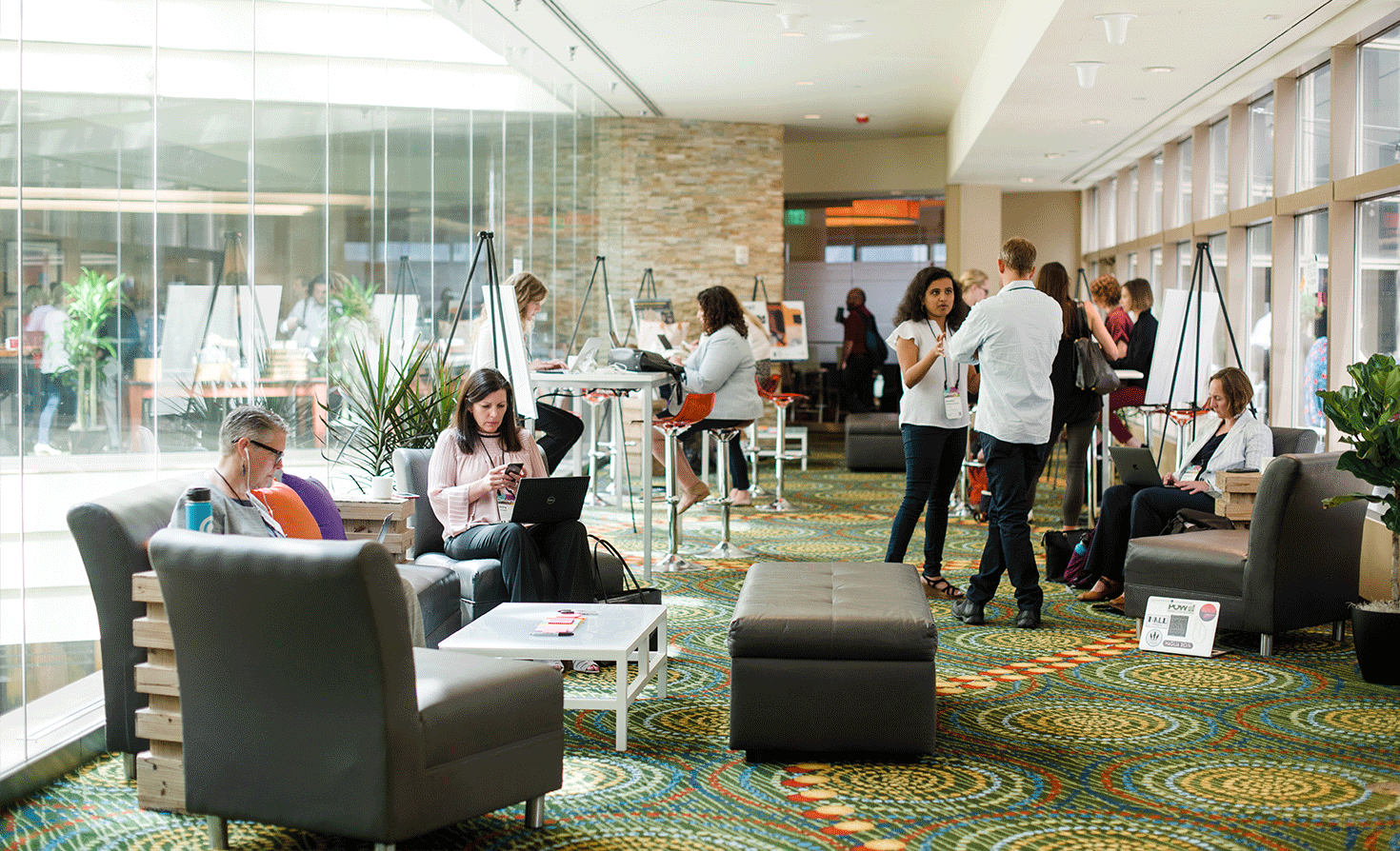 At the Circularity Lounge, diligent conference attendees could grab a quick, quiet second away from the action to process inspirational information, brainstorm ideas with new connections and/or catch up on emails, if they so chose. In the mainstage session, "Power, Privilege and Bias in a Circular Economy," (from left) Tawanna Black, CEO of the Center for Economic Inclusion in Minneapolis; Valerie Craig, deputy to the chief scientist and vice president of impact initiatives at the National Geographic Society; and Carrie Freeman, managing partner at SecondMuse, discuss a socially just circular economy.

So how can organizations working towards creating a circular economy make sure that all people are in the loop — and avoid perpetuating current systems that exclude and marginalize? "Coming in with a level of humility — 'we don't know what is actually happening on the ground' — being very intentional about the way we approach things, being intentional about how we signal, and very intentionally inviting people in," Freeman says. 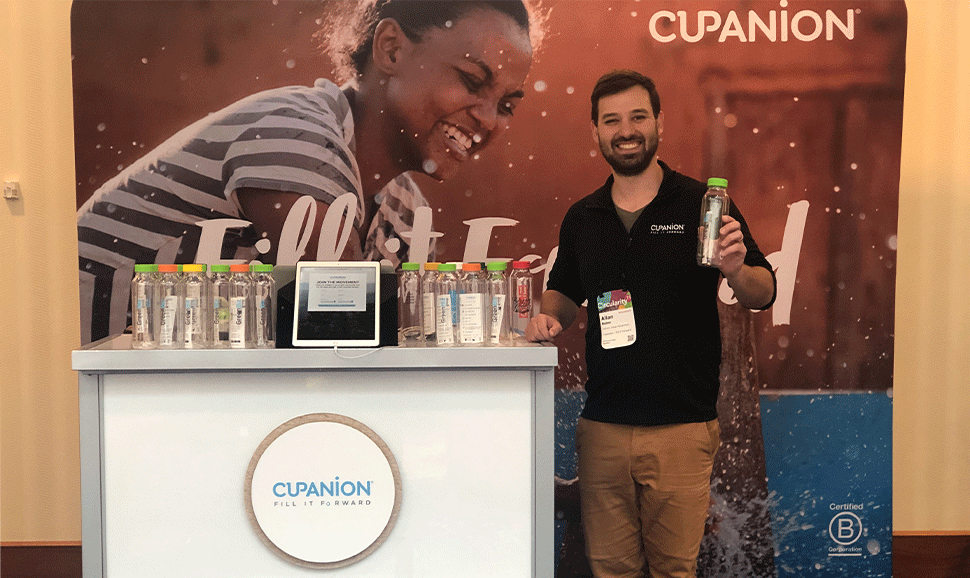 Cupanion was one of over a dozen exhibitors at Circularity 19, but the water bottle company isn't your average hydration station. The company also has an app that tracks how many times you reuse it and donates to clean water projects around the world based on how it's able to divert single-use plastic water bottles from landfills. 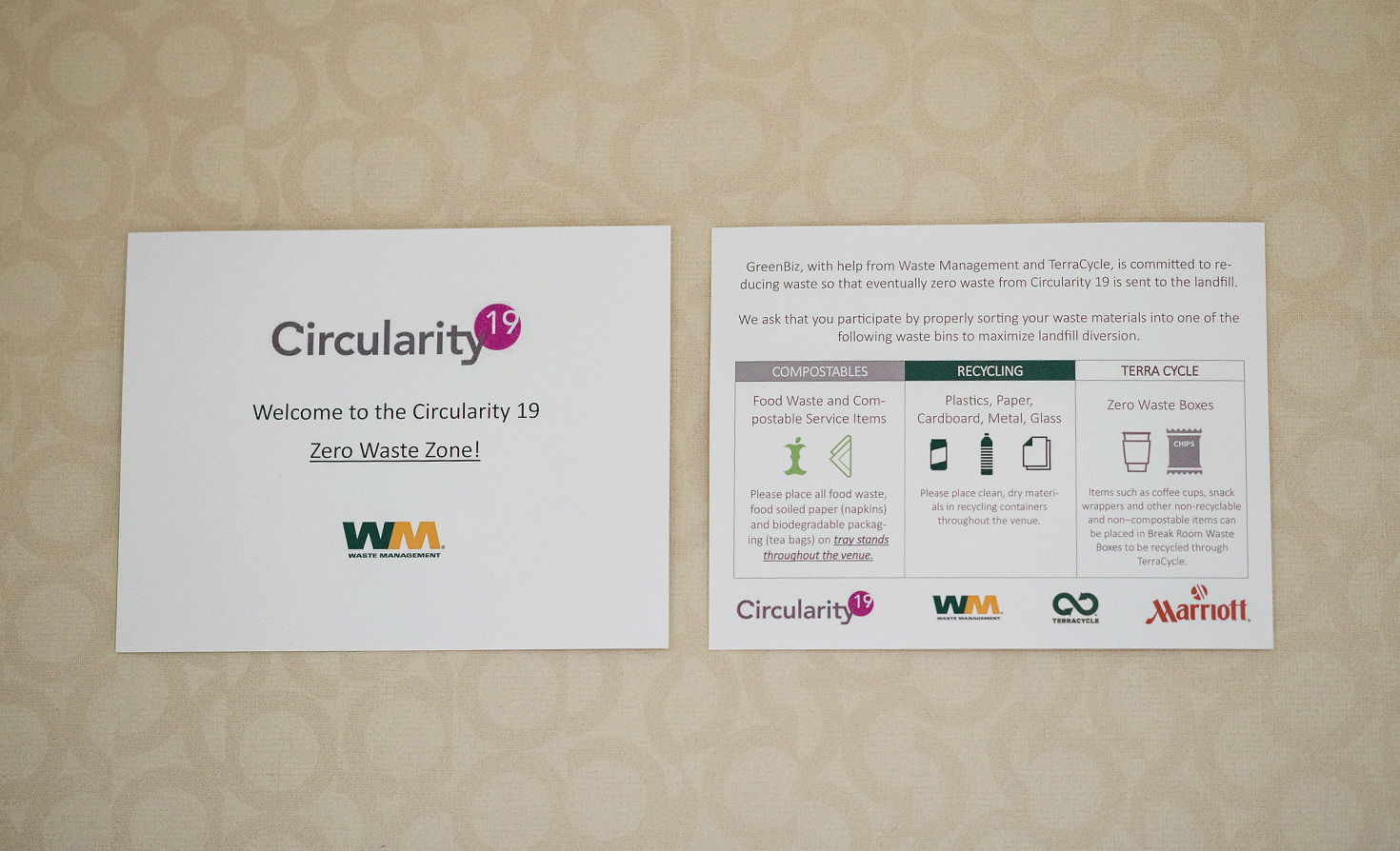 As with every GreenBiz conference, GreenBiz partners with waste management companies to ensure that zero-waste policies are implemented and carried through. At Circularity 19, there was a waste diversion rate of 99.8 percent. 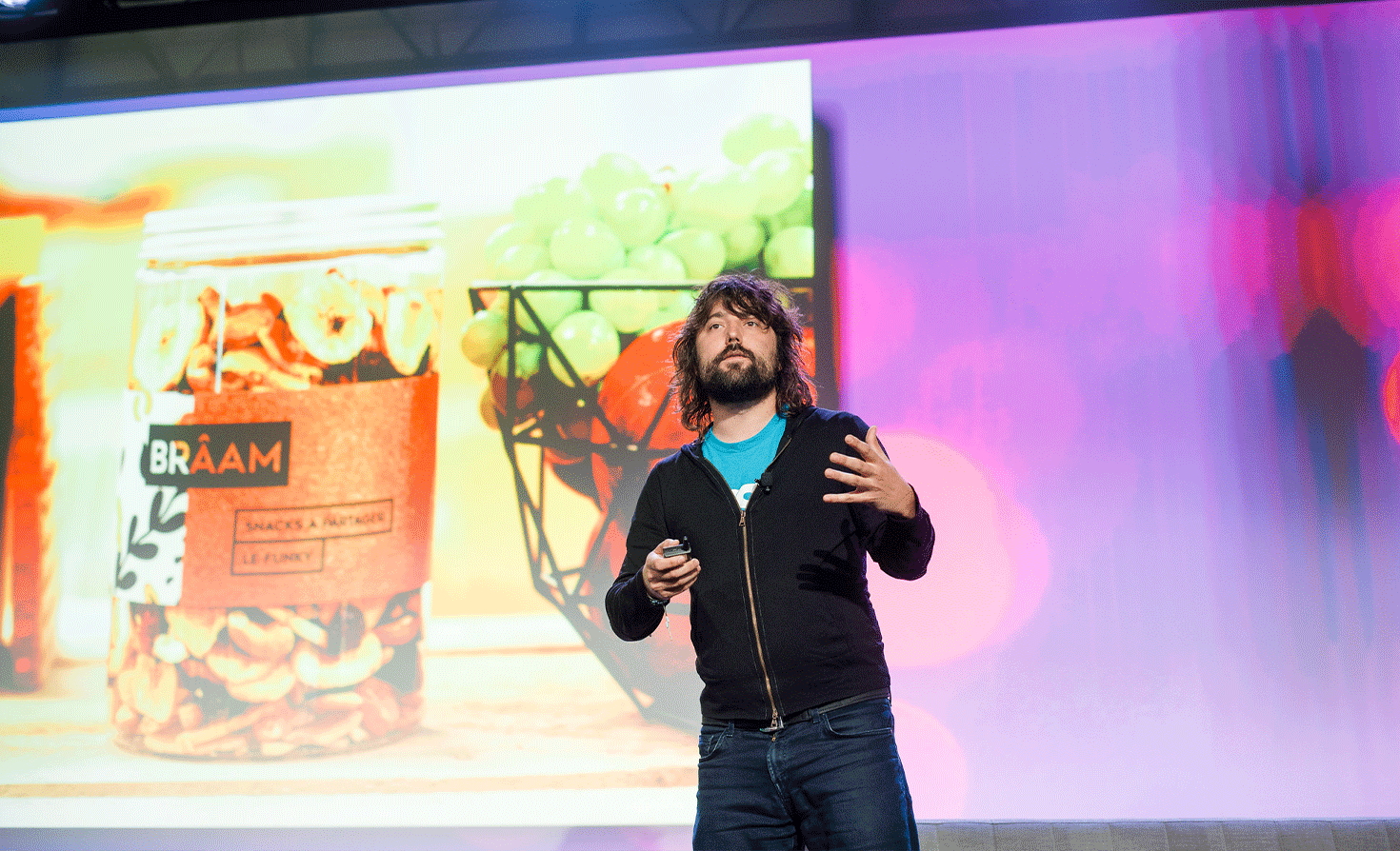 Tom Szaky, CEO of TerraCycle, speaks onstage at Circularity 19 to talk about the "return of the milkman model" with his company's new Loop initiative to prevent single-use packaging from entering the waste stream. He's an innovative recycling visionary and was a Circularity 19 conference adviser. 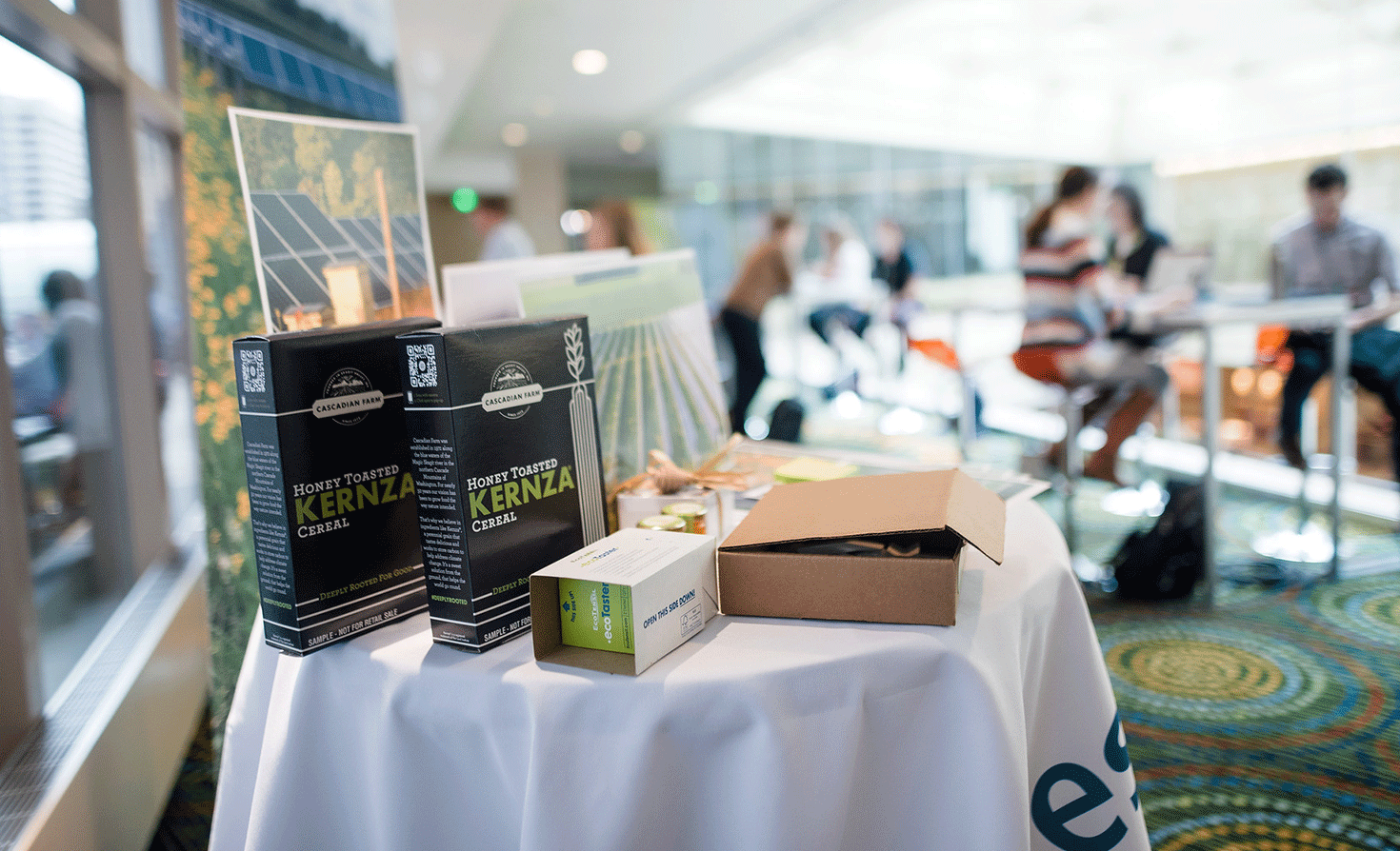 The circular economy is more than just reusing materials and products — it's also about regenerating systems that have been degraded in our current linear system. Enter Kernza, a domesticated perennial grain similar to wheatgrass that's being grown by the Land Institute. Its long root system sequesters carbon and can be made into cereal in its current production state. Bonus: It tastes good, too. 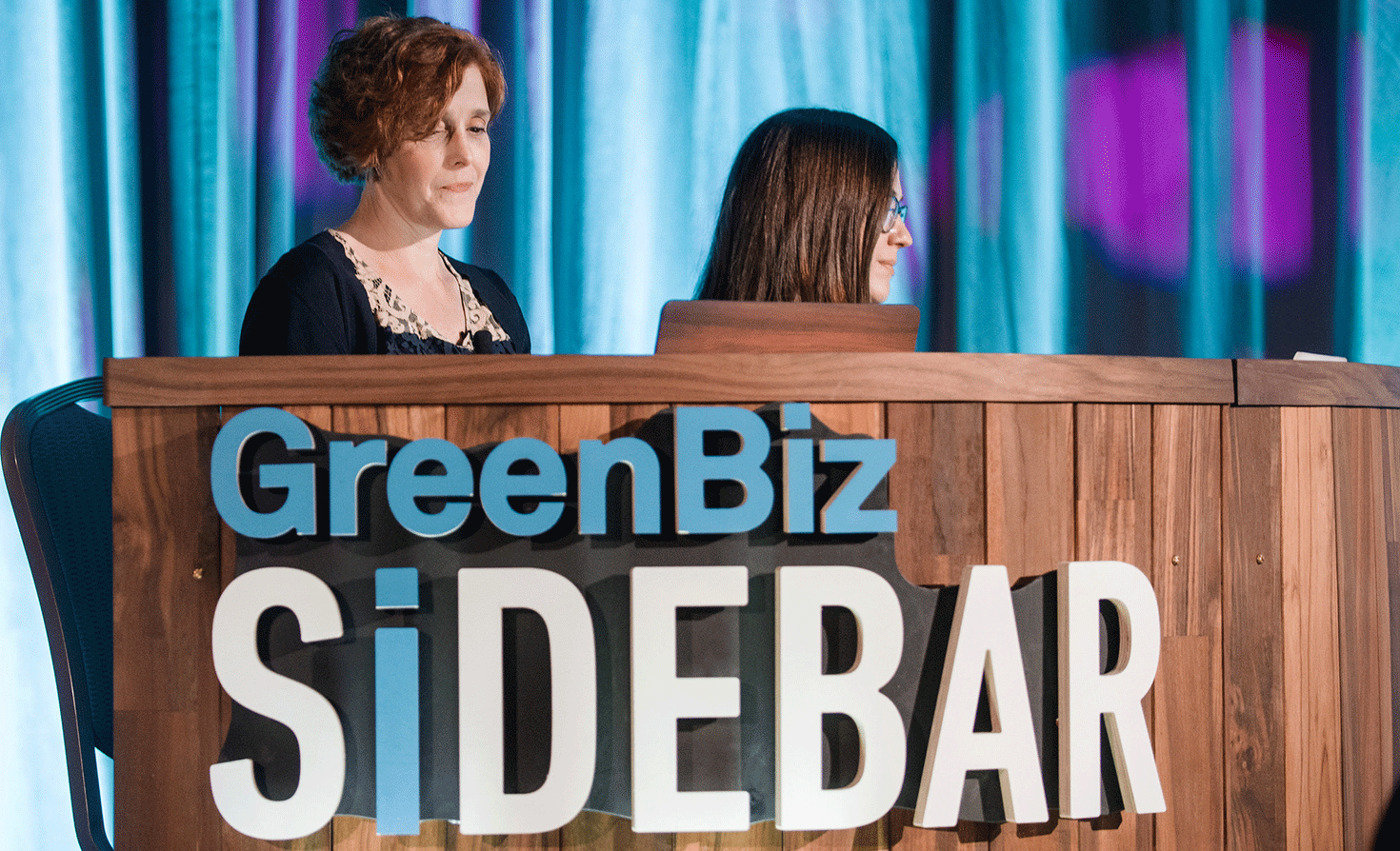 Heather Clancy (left), editorial director at GreenBiz, and Sarah Golden, senior energy analyst at GreenBiz, keep virtual audience members entertained with commentary on the conference's content as well as interview in-person attendees. During virtual livestreams, viewers can tweet to GreenBiz with questions for presenters, and the sidebar hosts can ask them during the Q&A portions. 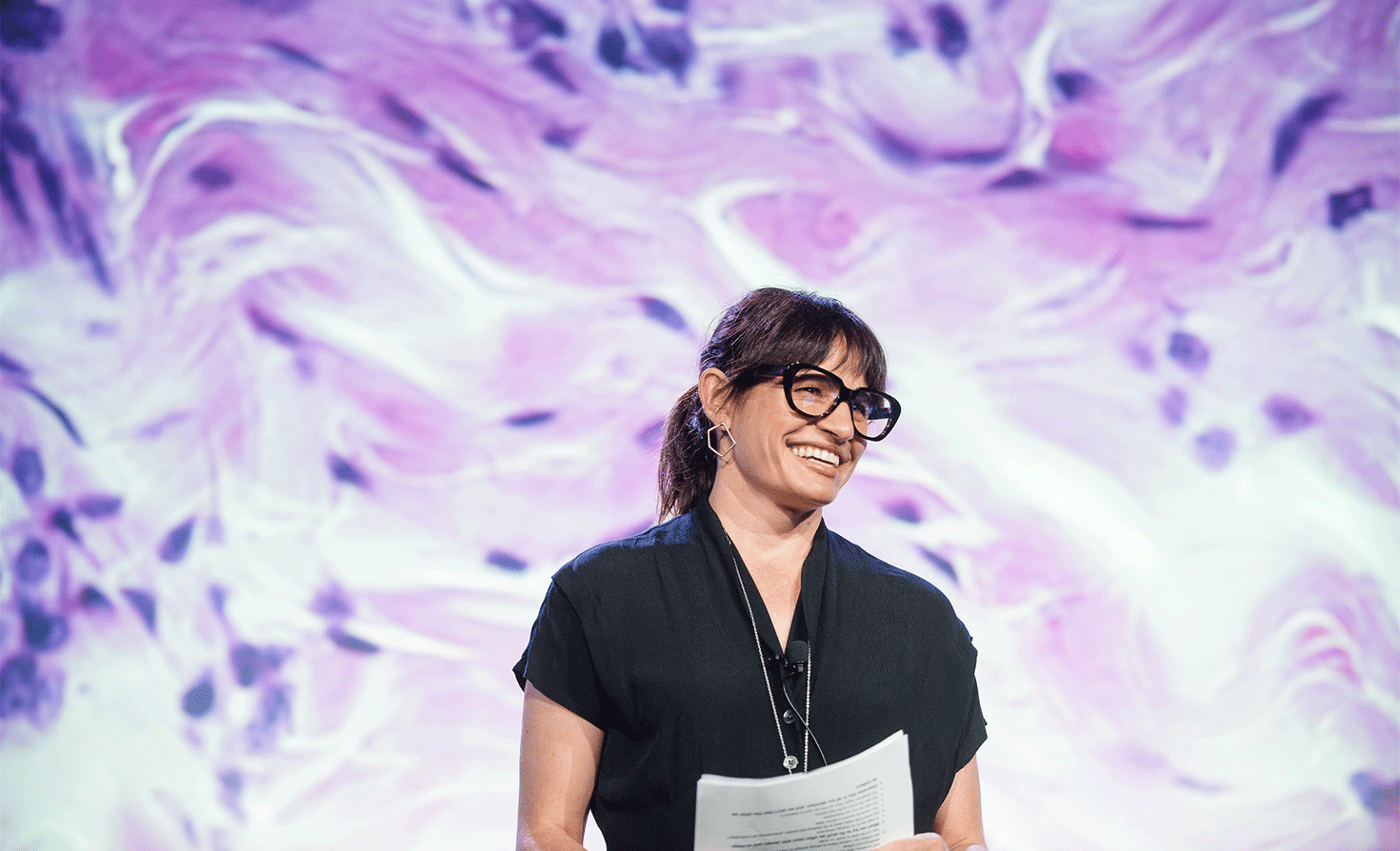 How can we create the cultural conditions that will enable a circular system? Lauren Yarmuth, director of circular economy programs with design firm IDEO, presents to the attendees and discusses what it would take to move the needle.

What does it mean to hold businesses accountable for climate change?