Scenes from Greenbuild 2011: A New Look for Solar, Greener Escalators, and an Eagle

The Greenbuild Expo never fails to fascinate me as companies and other exhibitors vie for the attention of footsore convention-goers. Each year vendors introduce a new element into the science-fair-on-steroids spectacle of the Greenbuild trade show.

The biggest eye-catchers this year were in the Schneider Electric booth, and there were plenty other things to see as well. Here are highlights of what I saw at Greenbuild Thursday:

“You got here just in time, they’re about to bring out the eagle,” Schneider Electric’s Green Building Solutions VP Melissa O’Mara told me when I arrived at the company’s booth at the expo. I could have sworn Schneider called its energy management system something else, but maybe they renamed it, I thought. 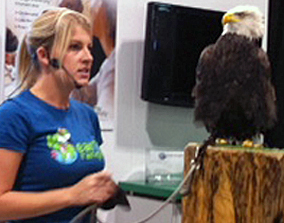 “Wait, do you mean a real eagle?” I asked. She did. There was a plump young kestrel falcon, too, though they weren’t displayed at the same time, and earlier in the week, a lemur visited Greenbuild. The animals are among inhabitants of the Earth Rangers Centre in Ontario, a nonprofit that introduces children to wildlife and conservation values through “animal ambassadors.”

Koho, a bald eagle, and some of its housemates were brought to Greenbuild to promote the center’s efforts to capture LEED-Platinum certification as an existing building.

The 70,000-square-foot facility already holds LEED-Gold certification from the U.S. Green Building Council. Equipped with a building automation, metering and lighting control system donated by Schneider, the facility uses 79 percent less energy than a standard building of comparable size. Then this summer, the center installed Energy Online, Schneider’s energy management information system. The monitoring system does a deep dive of building performance data and brings the information back to users, helping them save more energy and reduce costs.

“I bet I can shave off another 15 percent in energy easily,” said Andy Schonberger, the center’s director, who showed off some of the reports that the system can generate with one or two clicks. If he had to compile the reports himself, it would take hours, possibly a day or more. The point being, he said, that even a smart building can be made smarter with new tools. 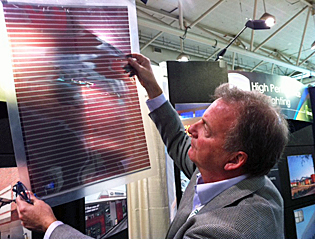 Michigan firm Duo-Gard is exploring how to use thin-film photovoltaic solar technology on bus and bike shelters, carports-cum-EV-charging-stations and curtain walls. The application would turn them into "architectural power plants," said Duo-Gard President Dave Miller.

Duo-Gard makes translucent curtain walls, canopies, carports, shelters and other structures and building components as we've reported before. Some of them are solar-powered, and those that are typically involve a mounted system. Using thin-film, lightweight technology, which is manufactured in rolls, enables designers to create structures with a cleaner, sleeker line that can help offset any energy drawn from the grid. The idea is being worked on by an R&D team and Miller said he would like the integrated solar power systems available commercially next year.

Also, Duo-Gard plans to go to market early next year with a translucent  skylight that filters infrared rays, blocks ultraviolet rays and supports daylighting by transmitting more light and less heat into a building. Duo-Gard introduced the skylight, called the Maximizer, last month.

Taipei 101, which received LEED-Platinum certification as an existing building in July, is now the greenest tall building in the world. Images of the highrise decorated Siemens' booth, which was a key partner in the retrofit. Standing at 101 stories, Taipei 101 uses 30 percent less energy than a standard building of comparable size would consume. Environmental measures in the building help avoid 2,995 metric tons of CO2 emissions a year.

This year, Schindler Elevator Corporation installed a 21,000-square-foot solar array at its North American headquarters in Morristown, N.J., where the renewable energy system now supplies about 11 percent of the facility's energy.

The 42-year-old building, which the company acquired two years ago, also is replacing its 475 windows with more energy-efficient ones. It retrofitted its lights and replaced 15,000 square feet of worn carpet with Cradle-to-Cradle certified carpet tiles. And it's using its own products to cut energy used for moving people in the building by as much as 20 percent.

Schindler brought the story of all the work to Greenbuild, making the impacts of the retrofits visible on a monitor in its booth -- and accessible to anybody online. The company's work can be viewed at adema.kiosk-view.com/schindler.

The Otis Elevator Company unveiled its energy-generating escalator at Greenbuild. The escalator generates energy on the way down and makes it available to the building for use in other systems. The escalator uses about 45 percent less energy than standard mechanisms.

Otis, a United Technologies Corp. firm, also is making headway in its "Way to Green" program. Otis has reduced industrial process waste of non-recyclable materials by 75 percent and non-greenhouse gas emissions by 74 percent since setting green goals in 2006.