The science of preparing cities for natural disasters

As Robert Muir-Wood sees it, there’s a basic flaw in how cities perceive disaster risk.

City leaders tend to look back at recent history to understand how well prepared they are for big storms, earthquakes, tsunamis or volcanic eruptions. Instead, they need to get better at predicting, planning and managing around what’s likely to happen in the future.

Applying this sort of catastrophe modeling is Muir-Wood’s specialty. He’s the chief research officer for Risk Management Solutions, a company that develops catastrophe-risk software models for the insurance industry, and advises other businesses and governments on managing disaster risks. He’s also recently published a book that explores the science of disasters and how humans do and don’t prepare for them: "The Cure for Catastrophe: How We Can Stop Manufacturing Natural Disasters."

I caught up with Muir-Wood earlier this month in Bonn, Germany, during the first summit of cities and the insurance industry. This interview has been edited for length and clarity.

Christopher Swope: In the book, you touch a bit on the children’s story about the Three Little Pigs — what point are you trying to make?

Robert Muir-Wood: The story is about the three little pigs and the big bad wolf, and it was actually written in 1840 by a student who had just been through a big windstorm. The wolf is really a big windstorm which tears at a house. At the beginning of the Victorian period, it was considered respectable to live in a brick house.

But if you imagine transferring this story to California, the big bad wolf is earthquakes. Which would knock down the brick house — and leave the house made of sticks untouched. So there is no universal way of responding to the hazards. You’ve got to respond to the hazards where you live.

Swope: How have building materials influenced those hazards? 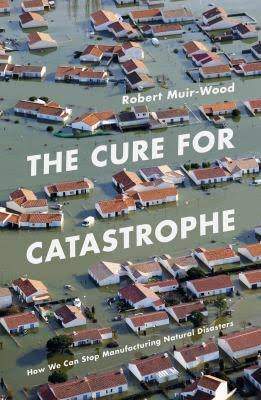 Muir-Wood: One solution in the 20th century appeared to be reinforced concrete. When well used, it’s a pretty good solution up against the various perils of earthquake and wind and fire, which were the principal ones that buildings had to be built to withstand. But there are two challenges with reinforced concrete.

One is that the leading architect in reinforced concrete in the first half of the 20th Century was Le Corbusier, and he had this idea that concrete liberated architecture from all its previous constraints. He envisaged the modern city as comprising high-rise buildings built on these thin supports. That’s what got built in city centers through the 1960s and ’70s, and it turns out to be lethal in earthquakes because the building swings back and forth on these thin supports. It’s the main cause of significant damage to modern buildings in earthquakes today.

The second problem is that reinforced concrete is incredibly demanding, to get the mix of steel and concrete just right to make a resistant building. In the developing world, they sell cement but there are no engineers. Without structural engineers, you can’t actually build safely in this medium. It’s the unfettered use of cement in the developing world that has created vast amounts of building stock that is highly vulnerable.

Swope: You talk in the book about countries that have developed a disaster culture. What can we learn from them?

Muir-Wood Certain countries in their history actually did get on top of their catastrophes and effectively develop a disaster culture. Most significantly, the Netherlands did really create a culture where everybody shared responsibility for managing the risk of floods. The country became the most prosperous in Europe in the late 17th century. They turned the organization required to manage disasters into an organization to manage the country. It’s a great example.

Other countries have tried to develop such a culture. Today, Chile has been pretty successful in developing a disaster culture around earthquakes. Earthquakes happen so frequently that everybody owns the problem. Every builder knows that if their building is found to have collapsed, then they can get sent to jail in the aftermath of an earthquake.

Swope: You also write about the difficulty of disaster forecasting. Why is that so tricky?

Muir-Wood: I have a whole chapter on what has worked and what hasn’t worked around disaster forecasts, particularly looking at volcanic eruptions. Vesuvius is a good example. You have warning signs, but at what point do you evacuate people? Because if you do it too early, they’ll drift back. And then later, they won’t bother to evacuate because you’ve already "cried wolf."

After the town of L’Aquila in Italy was devastated by the 2009 earthquake, they successfully prosecuted for manslaughter the local civil defense officials and earthquake experts because they’d been overtly reassuring people about the threat of the earthquake two or three days before it actually happened.

This is incredibly challenging. We expect some official to take on the role as a disaster manager, probably with no previous experience and with extraordinary expectations laid on them and the political impossibility of really getting it right.

Muir-Wood: It is impossible — unless you really teach people what is possible and what is within the limits of what we can know. People have developed an expectation around weather forecasts because they see them every day, so they have a sense of what degree of trust they apply to them. But they haven’t experienced that around disaster forecasts because they don’t see them day by day.

One exception was on the island of Montserrat, where there was a long-running volcanic eruption which went on for more than 10 years. The people, they had to have a pretty much daily or a weekly forecast to what was happening, and people did get used to how to comprehend uncertainty in the information they were delivered. That was unusual.

But crying wolf is a huge issue. The year before Hurricane Katrina, they evacuated New Orleans for another hurricane, Ivan, which missed the city. So when Katrina came along, a number of people didn’t bother to evacuate because they had just been through a false alarm.

Swope: What are some other obstacles city leaders must contend with?

Muir-Wood: One obstacle I mention in the book is that some people benefit from disasters. In Japanese folklore, the origin of earthquakes is considered to be the thrashing of a giant catfish called the Namazu. After an earthquake destroyed Tokyo by shaking and fire in the mid-19th century, cartoonists delivered woodcut prints of the Namazu that show local people attacking it to try and prevent the earthquakes. But in some of these prints, there were other tradespeople who were rushing to attack the attackers of the Namazu, because they’d like the earthquakes to continue.

It was an honest acknowledgment that disasters actually bring benefits to certain sectors of the economy, who the woodcut artists identified as the building industry, iron mongers, carpenters, plasterers and people who make ready-cooked meals.

We expect some official to take on the role as a disaster manager, probably with no previous experience and with extraordinary expectations laid on them and the political impossibility of really getting it right.

Recent studies have shown that one group who benefits is politicians, who turn up after disasters, hand out money and thereby win votes. The same studies show they win no votes for spending money on precautionary activities, even though you can show the benefits relative to the cost. The disincentive of politicians to spend money where it can be most impactful is a key problem around disasters.

Swope: Is there any way to change that?

Muir-Wood: The only way of circumventing this is to implement disaster risk auditing independent of cities and governments. In fact, the city of Tokyo has started this. The city plans to reduce its casualties from a repeat of the city’s devastating 1855 earthquake by 50 percent in the next few years. The city is going to use catastrophe models to track its progress.

If you can monitor this independently using catastrophe models — audit expected casualties and expected financial loss in a city in the same way you audit the finances or the creditworthiness of sovereign states — then you would have a way of checking on progress. The mayor would know they’re going to be assessed against this regular audit which comes around every three or five years. If they’re not making progress, they won’t get re-elected, and they won’t be able to fiddle the result because the auditing will be completely independent.

In the Sendai process around disaster risk reduction, they’ve asked governments to collect their own statistics and they don’t use any modeling in assessing progress. It’s not going to work because the severe events are too infrequent to just use a decade of data to tell you whether you’re doing well or not. It has to be model-based and it has to be independent of the country. There have to be international standards and an agency or institution which is considered totally reputable for assessing progress.

Swope: The book title speaks to a cure for catastrophe. What’s the cure?

Muir-Wood: Well the "cure" in the title is a challenge. The nearest thing to actually demonstrating progress and driving action is going to be this independent auditing of whether countries and cities are successfully reducing their disaster risks. We would measure that risk using catastrophe models. The results of the modeling would tell us the magnitude of catastrophe to expect on average once every hundred years, for example, in terms of the numbers who would be killed and the cost of the disaster damages. And we would repeat the audit every five years and see whether these numbers are meeting the target — such as a 50-percent reduction in disaster casualties. We already have the capability to do this.

Chile has been pretty successful in developing a disaster culture around earthquakes. Earthquakes happen so frequently that everybody owns the problem.

Swope: Are there any other implications for city leaders?

Muir-Wood: If you want to understand what really drives the risk and what you need to do, it comes down to planning decisions. It comes down to building codes and their enforcement, and avoiding corruption in how the building-code process functions, because the building sector is typically the most corrupt sector of any country. The level of corruption, we know, correlates quite strongly with casualties in disasters.

To make all this happen we need to really educate people about their risks — improving risk literacy so that people understand the need for warnings and the need for evacuation procedures. There are lots of things that a city leader can do to get their city to be resilient. It involves really engaging with people and educating them about the risks.

Disaster knowledge is increasingly global. The occurrence of the 2010 earthquake in Haiti even encouraged the Iranian government in Tehran to evacuate a significant number of its personnel out of the city. They recognized the parallels were just too great between the situation in Haiti, with an active fault alongside the capital city, and the situation in Tehran where a big active fault runs alongside the capital city. If we can learn such lessons across the world these days then we should be able to apply the best in global learning to measure our progress in curing the world of disasters.

Citiscope is a nonprofit news outlet that covers innovations in cities around the world.

What 2017 taught businesses about disaster management

Building Philippines disaster resilience, one mall at a time