Scientists around the world are turning agricultural waste into food, packaging and skincare products

This article was originally published in Ensia.

When we pick up a piece of fruit, bar of chocolate or package of flour, we don’t often think of the massive amounts of agricultural waste — stems, leaves, seed pods and more — that never make it off the farm.

Some of that material is used for organic fertilizer, soil enrichment or animal feed. But plenty is still available for other uses.

Meanwhile, farmers are facing increased economic uncertainty due to climate change, leading to increased rural migration, according to a 2018 report (PDF) from the United Nations Food and Agriculture Organization.

As concern about waste grows, researchers and commercial partners around the world are working to turn what’s being left behind or burned into new, useful products. By doing so, they hope to not only reduce adverse environmental impacts of agriculture, but also provide a new source of income for farmers.

Take cacao, for example. For every pound of cacao beans — the part of the plant that ends up in your chocolate bar — farmers produce about 12 times as much biomass. Now, researchers in Colombia have created new products from this "waste" material, including beer, juice, desserts similar to pudding and also nutraceuticals.

Cristian Blanco-Tirado, a chemistry professor at the Industrial University of Santander in Bucaramanga, Colombia, leads the Nextcoa project, which has developed these products. Nextcoa also uses cacao beans and waste to produce 100 percent cacao chocolates that are less bitter than traditional all-cacao products.

Instead of using the cane sugar, milk and soy lecithin found in a typical chocolate bar, Blanco-Tirado says that the product uses sweeteners and emulsifiers derived from the cacao fruit.

Instead of using the cane sugar, milk and soy lecithin found in a typical chocolate bar, Blanco-Tirado says that the product uses sweeteners and emulsifiers derived from the cacao fruit, which used to be thrown away after the cacao beans were extracted and exported. Blanco-Tirado says he expects "Betul" brand chocolate to be commercially available in August.

"Our Santander region in Colombia has traditionally been a producer of cacao beans, but only 6 percent of the revenues go to producers," he says. "So we asked if it was possible to take better advantage of the cacao fruit by developing technology for the production, not only of beans, but of products with greater value."

Blanco-Tirado says the biggest challenge is helping smallholder farmers understand the benefits of commercializing the waste, while also making the process financially viable and attracting investment.

For now, the team’s financial analysis says the price of the chocolate is competitive with luxury 70 percent cacao chocolate brands. Blanco-Tirado added that other products are being produced from cacao pods as well, including cellulose, juice and syrup.

In Europe, researchers armed with a $6.21 million grant from the European Union’s Horizon 2020 Research and Innovation Program are working on new environmentally friendly packaging, reducing both agricultural waste and the 9.9 million tons of plastic packaging waste ending up in European landfills each year.

Valérie Guillard is a food engineering scientist at the University of Montpellier in France and coordinator of the project, GLOPACK. The project uses residues from food industry and agriculture such as spoiled fruit juices, cattle manure, wheat straw and grapevine shoots as feedstocks for two key components of packaging.

The project uses residues from food industry and agriculture such as spoiled fruit juices, cattle manure, wheat straw and grapevine shoots as feedstocks for two key components of packaging.

The first component, polyhydroxyalkanoate (PHA), is synthesized by microbes and biodegradable, according to Guillard. The second component is made from wheat straw fibers and grapevine shoots.

These components are made into pellets, which are then formed into packaging in the same way petroleum-based polymers are.

"At this moment we pay almost nothing for petrochemical plastics and the end-of-life issues of such material is not paid for by the producer, explaining why the price is so low," Guillard says. "In other words, if we — the society — pay the true, real cost of plastic materials considering all plastic externalities, the microbial polyester we are producing in GLOPACK would become competitive compared to plastic."

She added that using agricultural waste for packaging would permit industry to reduce its dependence on petrochemical products and decrease greenhouse gas emissions.

Guillard is looking to scale up the current GLOPACK prototype production to pilot-stage levels by June 2021.

Bring on the biomolecules

On the other side of the planet, Australian researchers are working on extracting useful molecules from agricultural plant waste for use in medicine, cosmetics, food additives and more.

According to Bulone, the most promising examples include food pigments from fruit; chitosan from mushrooms for agricultural or medicinal uses; and sulforaphane, a compound with a variety of potential health benefits, from vegetables such as cauliflower and kale.

"All of these currently have a low value," Bulone says. "Given the high volumes available in some instances, this can represent a real new business for the growers with new revenue generated from current waste, provided that capital investment for commercial exploitation can be attracted."

Given the high volumes available in some instances, this can represent a real new business for the growers with new revenue generated from current waste.

Particularly attractive are anthocyanins, the pigments and antioxidants that give blueberries and blackberries their distinctive color. They are used in beauty and skin care products.

Bulone says the extraction process is simple and takes only a few hours. First the mixture is homogenized, then the chemicals are extracted and dried. The process is all mechanical or solvent-based, so no microorganisms are involved.

Apples, cherries, most types of berries, black olives, and the skins of onions and potatoes all produce different classes of this biomolecule, and all can undergo the same process. The different kinds of biomolecule can be separated and extracted at the end of the process.

Bulone says the total funding for the project is $7.58 million over four years, from government and industry partners. The next step is to get the process working at an industrial scale, followed by a local pilot plant and then full-scale commercialization.

And this is just the beginning. As scientists around the world explore new ways of using agricultural waste, other previously unappreciated materials are emerging as a valuable resource for helping farmers make ends meet while making a more sustainable world. 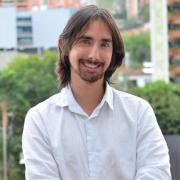 See all by Andrew Wight