This is an edited excerpt from the book "The Responsible Investor Handbook: Mobilizing Workers' Capital for a Sustainable World" by Thomas Croft and Annie Malhotra, published by Greenleaf Publishing.

As the sun rose on March 9, 2015, a preposterous-looking solar-powered plane called Solar Impulse 2, with a wing span longer than that of a Boeing 747, took off from the Middle East in an historic record-breaking attempt to fly around the world. "Andre Borschberg and Bertrand Piccard aren't looking to revolutionize aviation with their solar-powered aircraft. Rather, the Swiss duo [said] they want to raise the profile of a suite of technologies on their Solar Impulse 2 aircraft — many commercially available today," showing that alternative energy sources and new technologies can achieve what is considered impossible.

These pilots, as audacious as any explorer in recent times, had already flown this craft across the continental USA in 2013. Now, they have crossed the second of two oceans and, despite snags and delays, the pilots aimed to return to the Middle East by late summer 2016. Like the Wright Brothers at Kitty Hawk, their dream will most likely not be denied. [Editor's note: They landed in July.] 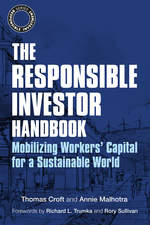 American know-how pioneered the early development of modern solar energy. American workers’ pension funds, along with research dollars from U.S. taxpayers, helped make this flight possible. How? U.S. pension funds provided the early capital for the decades-old breakthroughs in solar energy. These investors sourced part of the capital for early corporate inventors (PDF) of solar technology such as ATT Bell Labs, RCA, ARCO Solar and GE. They bet on venture capital funds that launched hundreds of solar entrepreneurs. In so doing, workers’ capital — the pension assets and savings of everyday working people such as teachers, steelworkers, firefighters, pilots and engineers — has seeded and grown innumerable innovative industries that have far-reaching, Earth-changing impacts.

They bet on venture capital funds that launched hundreds of solar entrepreneurs. In so doing, workers’ capital — the pension assets and savings of everyday working people such as teachers, steelworkers, firefighters, pilots and engineers — has seeded and grown innumerable innovative industries that have far-reaching, Earth-changing impacts.

In the U.S. and internationally, labor unions were the original "crowdfunders," fighting for the establishment of collective retirement and welfare benefits for their members. Through these pooled assets, workers helped construct the building blocks of advanced economies around the world.

For over a century, trade unions and civil society worked together to build housing, finance banks, credit unions, and insurance companies and capitalize companies. They were among the pioneers of long-term investment in the real economy and in ensuring greater responsible corporate governance. Advancing untold financial design innovations, labor’s financial institutions successfully deployed capital to revitalize cities and industries and, acting as responsible shareholders, pushed "the boss" to be more accountable.

For over a century, trade unions and civil society worked together to build housing, finance banks, credit unions, and insurance companies and capitalize companies. They were among the pioneers of long-term investment in the real economy and in ensuring greater responsible corporate governance. Advancing untold financial design innovations, labor’s financial institutions successfully deployed capital to revitalize cities and industries and, acting as responsible shareholders, pushed "the boss" to be more accountable.

An emerging new generation of responsible investors is mobilizing capital for complex smart buildings and affordable housing, community infrastructure projects, wind and solar projects, electric and hybrid vehicles and other inventive solutions. These investors are applying a more holistic and integrated investment approach to the challenges facing cities, industries and our environment and reaping the financial benefits.

They are joining coalitions to pool capital to rebuild cities, make companies more humane and efficient and address climate change. They are amalgamating resources and investment capacity across borders, as evident from the rapid spread of the U.N.-launched Principles for Responsible Investment (PRI).

In the U.S. and internationally, labor unions were the original 'crowdfunders.'

Alongside these developments has been the tremendous growth of pension assets. As the ownership of corporate America began to change hands, from primarily owner-founders in the early 1900s to pension funds and other large institutional investors in the mid-1900s, the latter came to own broad swaths of the public capital markets.

As a result, these large institutional investors came to be referred to as "universal owners." In the latter part of the 20th century, pension funds also began to make greater allocations to alternative investments, particularly in private equity and venture capital, hedge funds and real estate.

The retirement assets of working people have been instrumental in the development of the U.S. (and the world) economy and its capital markets and those of our global neighbors, fueling the desire for growth and prosperity. While worker representatives were among the most important architects of retirement systems, workers and retirees themselves have little influence on how their assets are used to fuel this growth and whether this growth will cater to their own long-term economic, social and environmental interests.

Despite important strides made with the investments of workers’ capital, trustees who oversee pension funds have been challenged by weak governance structures, increased capital market complexities, the oversized influence of investment managers and external consultants and a multitude of regulations. They have sometimes succumbed to institutional herd mentality and suffered "disrupted attention to the fiduciary duties of loyalty and impartiality."

The result has been greater separation between the long-term interests of workers and retirees (plan participants and beneficiaries) and the interests of those who oversee, manage or use pension assets. This agency separation (PDF) has resulted in the investment of pension assets into approaches that ignore long-term risks and that are focused on market timing and short-term gains at the expense of sustainable, long-term value creation. It has also resulted in little accountability for the negative environmental, social and governance (ESG) impacts often generated in the pursuit of short-term gains.

How did we arrive at short-termism as the standard modus operandi in institutional investments (and, indeed, the practice of a large swath of the capital markets)?

How did we arrive at short-termism as the standard modus operandi in institutional investments (and, indeed, the practice of a large swath of the capital markets)?

We do not have the space to fully examine the pursuit of short-termism by managers, shareholders and gatekeepers, except to include the results of some recent reports. However, it is important to understand the drivers of short-termism, so as to be able to counter those forces and reestablish a flight path to long-term investment.

While this handbook trumpets the role of workers as shareholders and active owners, we are especially concerned when pension shareholders are found to be among those actors in the investment value chain who contribute to short-termism. Such short-termism has often led to risky financial experimentation, or financialization, leaving working families and communities to absorb the fallouts.

The 2008 financial crisis brought on by the subprime housing market crash bore testament to the explosive negative impacts of short-term, speculative investments "whose risk profiles they [pension funds] did not fully understand." These misguided investments impacted not only the financial value of pension assets, but also broader civil society. Nearly $11 trillion in household wealth vanished, including $4 trillion in retirement accounts and life savings. In addition, millions of jobs were lost and homes were foreclosed.

Resources were diverted from important environmental issues such as climate change), among many other negative effects. Some institutional investors recovered, through lawsuits, a small portion of the losses caused by Wall Street’s financial engineering mistakes and blatant frauds. But the U.S. Government and the Securities & Exchange Commission (SEC) were famously inept at punishing the illegal actions by banks and investment houses. In all, our federal and state governments recovered a paltry $130 billion from the largest U.S. banks for their actions as of April 20, 2015. For capital stewards, the hard lesson is that there is no higher authority that will recover your losses and market rebounds may not return all that is lost.

In order to close the large funding gaps between plan assets and promised retiree benefits, many pension plans continue to make greater allocations to investments that promise higher returns but that also come with higher risks, further jeopardizing worker and retiree benefits.

We encourage pension trustees to realign their governance and investment strategies with the long-term interests of plan participants and beneficiaries by incorporating responsible investment practices into the investment decision-making process for plan assets. Responsible investors, with their longer-term focus, ESG-based holistic risk assessment and shareholder activism, are better equipped to preserve and grow retirement capital while maintaining intergenerational equity.

This equity represents the idea that "growth should occur while ensuring a certain level of economic, social and environmental security for future generations," emphasizing important and inherent links between the goals of workers’ capital and those of responsible investing.

Fortuitously, there is a sea change under way in conventional investment philosophy as represented by the U.N.-backed PRI, which supports the realignment of the stewardship of workers’ capital with long-term responsible investing. We hope that our efforts will help increase trustee knowledge around the why and how of aligning workers’ retirement assets and savings with long-term, sustainable, and responsible investment practices and, most of all, spur action.

The Greening of American Capitalism

Why investors have fiduciary duty for the environment

Is your company's pension plan aligned with its climate commitments?